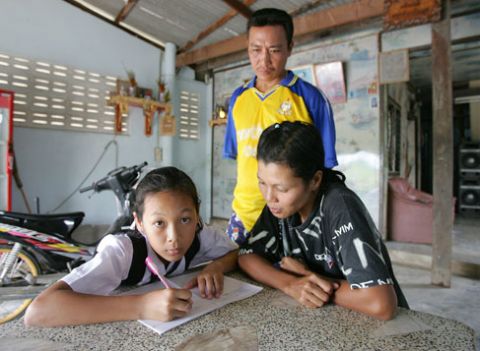 A QUESTION FOR BILLIONAIRE EX-PM OF THAILAND
WHY DID YOUR POLICE KILL MY LOVELY GRANNY?
SUNDAY MIRROR INVESTIGATES: DISTRAUGHT FAMILY SEEK TRUTH
August 5 2007
By Kate Mansey And Andrew Drummond
As he ploughs millions into Manchester City, new owner Thaksin Shinawatra is being hailed by fans as the latest foreign billionaire to bring his riches to British football.
But back in his native Thailand, the exiled former prime minister is being investigated over policies which led to the deaths of nearly 2,500 people.
Last week, while Thaksin signed off the purchase of four new multimillion-pound players by Man City manager Sven Goran Eriksson, human rights groups accused the 57-year-old of supporting mass executions and torture during a yearlong war on drugs he ordered in 2003.
In a small town 100 miles south of the capital Bangkok, little Montililai Klinmalee is one of the innocent victims of that war on drugs.
Montililai – nicknamed Noon – was just seven when her grandmother was shot dead in front of her by policemen her family say were acting on orders from Thaksin’s government.

(Noon,pictured above, writes to Manchester City)
Now 11, Noon is still confused and traumatised by an event she cannot understand. ‘What did my granny do wrong?’ she asks. ‘She did not know anything about drugs.’
Holding the hand of her mother Nongkran at the family shop in Baan Laem, in the northern Phetchabun province, Noon says: ‘I was very young. I did not know anything. But I know now. I am not scared. My grandmother had nothing to do with drugs. I know that.
‘Can you find out why she died?’ she asks. ‘Nobody has investigated it here.’
Nongkran, 30, has tried in vain to find out why her mother was killed that day. ‘I wrote to Mr Thaksin. I wrote to the interior ministry,’ she says. ‘But they never even bothered to reply.
‘I don’t understand those people in England who want him to run their football club. Is money all they care about? Maybe someone in England can provide the answers. How can he do these sort of things to his own people?
‘When the police came here one of them took a photograph from his pouch and nodded. Then the other pulled his gun and shot my mother in the chest.
‘She slumped forwards and then he fired at least five more shots. Then both men turned around and casually walked out of the shop. My mother knew nothing about drugs.’
(Picture Right: Somkid)

The family’s story has been looked at by Pradit Charoenthaitawee of the Thai Human Rights Commission, which is investigating deaths during the drugs war launched by Thaksin in February 2003.
Dr Charoenthaitawee said: ‘I will bring the charges myself privately if need be. We have strong evidence in 400 or so cases. Many of these injudicial killings were carried out in daylight in front of witnesses and many had nothing to do with drugs.’
At the height of the drugs war Suwit Baisan, a cameraman working for Thailand’s government-run TV Channel 11, famously went on his knees in front to Thaksin to ask why his mother and father had been shot.

(Suwit above: ‘What happened to my parents Mr. Thaksin?’ Courtesy The Nation)
He never received an answer. At the end of 2003, Thaksin declared victory in the war on drugs. He denied police were carrying out executions without trial and insisted many of the deaths were merely the result of drug dealers killing other drug dealers. No investigations were launched.
Thaksin has refused to return to Thailand under the current regime since he was deposed in a military coup last year. As well as human rights abuse accusations, he also faces corruption charges over a Ãƒâ€šÃ‚Â£11.3million land deal he struck while PM. If convicted, he and his wife Pojaman face 13 years in jail.
But a trial is more than many of the drug war victims were afforded, claim campaigners. Last week Brad Adams, Asia director of Human Rights Watch, sent a letter to the Premiership questioning Thaksin’s suitability to own Manchester City.
He said: ‘Mr Thaksin’s time in office was characterised by numerous extra-judicial executions, ‘disappearances’, illegal abductions, arbitrary detentions, torture and attacks on media freedoms.
‘The most disturbing period of Mr Thaksin’s rule was his ‘war on drugs’.
‘It appears Thaksin is trying to buy his way into polite society in Britain to cleanse his image. The Premier League shouldn’t play this game.’
‘Thaksin’s lawyer, Noppadol Pattama, said the allegations against him are unfounded. He added: ‘As far as I am concerned, he has never instructed any public officer to execute a drug dealer. We will be able to prove his innocence after the general election when we are sure our client will get a fair trial.
‘We just tried to solve the drug problem in Thailand by getting tough with criminals. But he has never issued any instructions for shoot-to-kill policies. I hope Manchester City fans and British people are fair-minded. They should suspend their judgment before deciding Thaksin is not fit. He is a fit and proper man to run the club.’
‘Last night a Premier League source said they were prepared to question whether Shinawatra passed their ‘fit and proper person’ test to run a football club if any new information came to light.
The source said: ‘There is ongoing due diligence and if something adverse comes to light we are empowered to investigate and take the appropriate action.’
*Sunday Mirror story here