The acquittal of Alan Morison and Chutima Sidasathian today of criminal libel and violating the Computer Crime Act is reason to celebrate.

But it may have no bearing on many cases being brought under Thailand’s Computer Crime Act not only against journalists but even tourists and resident foreigners by others who do not want their misdeeds exposed.
The Foreign Correspondents Club of Thailand today issued a statement (below) in which they hope these acquittals will discourage others in positions of authority from using these laws against journalists writing critically.
The FCCT could have mentioned that it is not only people in positions of authority using these laws but foreigners with criminal convictions even before they came to Thailand.
On a lower level the Computer Crime Act assists criminals and wealthy members of society caught with their fingers in the jam jar.
First they commit the robbery – then they use the now penniless victim’s cash to sue him if he complains.
Certain sections of the laws which were intended to protect the monarchy do more to assist the criminal  because the lese majeste laws are more than adequate for the purpose they were intended.
These laws are used against journalists not by people in authority but by criminals – because they simply can.
This is the FCCT statement:

The professional membership of the Foreign Correspondents’ Club of Thailand welcomes the acquittal of two journalists charged by the Royal Thai Navy with defamation and violating the Computer Crimes Act. A judge in the criminal court in Phuket found no basis for the charges against Alan Morison and Chutima Sidasathian, the two founders of the Phuketwan news website.

The charges were filed in December 2013, over an article published six months earlier by Phuketwan, which included a 41-word paragraph from a Reuters investigation referring to the role of Thai naval forces in human trafficking. Phuketwan did not retract or apologise for their article, but they did offer the Navy the opportunity to put its case on Phuketwan. The Navy declined the offer.

The FCCT condemns the use of the Criminal Defamation and Computer Crimes Laws against journalists for their reporting, when other remedies for redress are available through civil legal action. Journalists should not be at risk of long prison sentences for what they report. We commend the court in Phuket for this encouraging verdict, which we hope will discourage others in positions of authority from using these laws against journalists writing critically.

We also urge the Royal Thai Navy to end this unwarranted case now by not appealing against the verdict. It has only served to damage the navy’s reputation, and disrupt the lives of two journalists whose only crime was to try to expose the illegal exploitation of migrants in Thailand.
COMMENT
Magnanimous in victory but this is no triumph for Thai justice 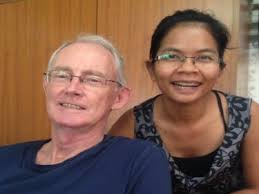 EUROPEAN UNION: “The EU is committed to promoting and protecting the freedom of opinion and expression worldwide.
The EU Delegation wishes to express its concern over the increasing misuse of criminal defamation laws in Thailand. The EU believes that defamation laws should not be misused to censor criticism and debate concerning public issues as this constitutes a serious threat to Freedom of Expression.Recent cases brought against Human Rights Defender Andy Hall, journalists Alan Morison and Chutima Sidasathian from the”Phuketwan” newspaper, and the freelance journalist Andrew Drummond have served to demonstrate how criminal defamation laws are vexatiously used to silence freedom of expression and investigative journalism in the country.The EU would like to appeal to State authorities to fully abide by their international obligations.As part of wider reform in Thailand, we urge the National Reform Council to address this issue, so that criminal defamation laws can not in the future be used as a means of silencing legitimate analysis or debate.”

FCCT:he professional membership of the Foreign Correspondents’ Club of Thailand supports the following statement endorsed by the European Union heads of mission in Thailand concerning the abuse of a suite of defamation laws that continue to stifle legitimate investigation on matters of public interest, free speech and fair comment with the threat and application of criminal penalties.
There has long been concern in such cases that telling the truth may not stand up as a defense in court. Among a number of other concerns is the use of vexatious litigation, or malicious prosecution, in which defendants are forced to defend multiple similar cases filed in different locations by the same plaintiffs or plaintiffs working in concert.
Such tactics do not serve the cause of justice or openness and squander public funds in the courts. They should be investigated as a matter of urgency.