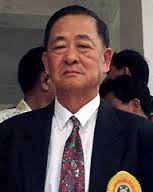 SO SOD OFF LO!

-So nothing ever changes in the politics of heroin. Only the bosses get replaced and in Asia most of them seem to die naturally rather than their minions who can get clubbed to death, covered in honey and fed to ants, or hanged.


Thus I was unimpressed with the procession in Yangon (Rangoon) yesterday and the funeral rights for Lo Hsing Han. This Chinese drugs warlord spent his last few years in pin stripe suit overseeing a construction conglomerate in Myanmar co-operating happily with government officials.

I never knew Lo. Though I got to know his predecessor fairly well; well as much as he chose to let me on half a dozen trips by mule to his camp in the Shan States of Burma.

Chan Shi Fu, or Khun Sa and Lo Hsing Han have many similarities. They are both of Chinese extraction. They both worked as district leaders for the Burmese Government of Ne Win. They both ran Shan (Tai Yai) armies which protected their heroin.

They also both lived in Thailand for considerable periods.  And they both had no trouble coming or going across the Burmese border despite the fact that both were described by DEA and U.S. State Department as the world’s biggest heroin traffickers.  They were both given amnesties by the Burmese military junta and had thriving follow-on business careers.

Apart from those dying in the west of heroin addiction, the only injudicial deaths which occurred in the Golden Triangle happened if these men ordered it; or in the occasional battle with rivals, or mock battles with the Thai and Burmese governments.

Officers of their armies got treated in hospital in Chiang Mai. Both had contacts high up in the Thai and Burmese military and governments. Their weapons and ammunition came in Thai army packages.

Khun Sa used to offer his annual heroin haul up to the U.S. government for cash: It was to feed his people, he said. The U.S. adopted perhaps the less pragmatic policy of trying to indict him.

When they paid – the Thai army attacked him. Then Khun Sa paid the Thai army to go away. In his camp I saw regular ‘senior’ visitors from Thailand. He had a lot to sell apart from heroin. Rubies and wood figured high on the list.

It was not that long ago that Thai Police Generals were fighting over the control of the Golden Triangle heroin and its route out to the west. A lot of that cash has funded some very widely respected institutions in Bangkok.

My first trips to South East Asia were to cover the heroin trials in Penang and subsequent executions. There were Australians Kevin Barlow and Geoffrey Chambers who were led to the gallows in Pudu Prison in Kuala Lumpur. Then came Briton Derrick Gregory.

Gregory had not even left Britain before, not even a day trip to France, when he was offered a trip to Malaysia by a chap. whose car he fixed.

He was brain damaged. He went to special schools as a child. He had a record for attempting to steal a train from Charing X. Colleagues and I got him psychiatric help and a brain scan which showed he literally had a hole in his head. It was not enough to impress the Malaysian judges. Derrick swung as well.

The family knew I had tried my best. Derrick’s brother Paul worked for British Airways. Despite my failure on my next trip back from London to Bangkok I found that I was upgraded to first class.

Anyway farewell Lo. I hope those horses and chariots take you to a far worse place.