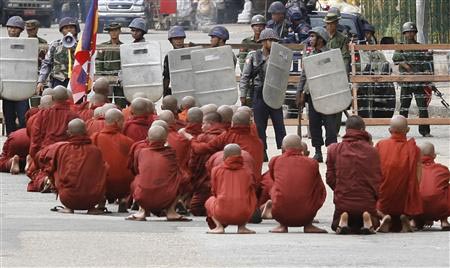 The Burmese officer cadet at my dinner table
From Andrew Drummond, Bangkok, September 29 2007
The former Burma officer cadet at my dinner table this week did not
blink an eye when I asked him how could the Burmese soldiers so
regularly turn their guns on their own people.
Or indeed how could they crush the skulls of Buddhist monks with their rifle butts?

After all he had just announced to me that at the age of 12, when
soldiers killed some 3,000 pro-democracy supporters in Rangoon, he had
been out there in the streets firing nuts, bolts, and screws into their
ranks.
But when he came of age the army was the career chosen for him by his
father. Its the shortest way to an easy life in this impoverished
country.
‘We have seven years of training. Every day we are told that we are
the protectors of Burma, but its enemies can come in all different
forms.
‘If you show any sort of disloyalty, any sympathy with the agitators you lose your life. You become nothing.
‘There is no soldier out there who is going to disobey an order from
Than Shwe (Burma’s president). Reports that some soldiers are disobeying
orders are hard to believe. It’s just wishful thinking by the
pro-democracy demonstrators.
‘The only possibility is if there is a break in the army’s unity. It
happened when Khin Nyunt* was ousted. But that opportunity has gone.’
Aung Kyaw Soe is one of scores of former Burmese soldiers across the
border here in Thailand. They come for a variety of reasons, but usually
it’s for an easy life, having used their contacts to start various
‘import-export’ businesses. Not many are here for idealistic reasons I
am sorry to say.
Aung Kyaw Soe is no exception, though who can blame him fleeing Burma
at the age of 24, and seeking escape from one of the most isolated
countries in the world.
Aung Kyaw Soe, is the name he has given me. It is not real of course.
The son of a Burma Army Bho Hmu (Major)  he is a Burma army
deserter.  Now aged 33 he signed up as a ‘Bo Laung’, officer cadet, in
1994, despite having witnessed the atrocities in Rangoon in 1988.
‘The incentives were too good. On completion of training all soldiers
are given free housing, a salary, and enough supplies of rice and
cooking oil a month to start your own black market.  And with those
stars on your shoulder, believe it or not, you command respect in
Rangoon society, the only society that counts.
‘I just quit because I did not like it. The military training was too
tough. I did not want to continue getting up every day at 4 am, and go
through all that training on a diet of phae hin. (yellow bean curry)’.
When I ask him about sanctions against Burma he laughs out loud. ‘Oh
you mean the threats from all those paper tigers. Now nobody cares about
that at all. Why should they?  I don’t think Than Shwe is planning a
holiday in New York.
‘The army has gone through several phases, first fighting the Chinese
nationalists, (who invaded northern Burma with US General Stillwell in
the Second World War) and also the Burmese communists, then dacoits and
robbers ( the Burmese military term for the scores of rebel armies who
supported the British against the Japanese in World War 11)  then fifth
columnists within the country. But for the last few years they have
regarded the west as their enemy.
‘Actually the first lessons in our training are to learn to denounce
the imperialist Japanese and British who fought for control of our
country.  Now the enemies are George Bush and the British. You can see
how the protesters march to the British Embassy.  That really annoys the
Generals.  It suggests it was better under the British and the
Burmese can trust them more.’
‘It’s no secret that most Burmese want military intervention. Nothing
else can top the regime.  In fact I say yes. My country should be
invaded and the troops will be mobbed in the streets.  There is
absolutely no other solution….. But nobody is going to do it are they?
Aung Kyaw Soe says managed to get through his military career without
seeing a shot being fired in anger.  As a supply officer cadet he
helped moved food and munitions for units fighting the Karen National
Liberation Army near the Thai border.
‘If you see a snake or Karen, kill the Karen first’, he said quoting a
racist expression used in Thailand, accept here referring to Indians.
Clearly his military training had left some marks.’
This week he has been in contact with friends and relatives by phone.
He has just come of the phone talking to a niece whose primary school
was raided by soldiers wearing red scarves.
‘They are the worst, ‘ says Aung Kyaw Soe. ‘Special Forces. They are
recruited in the provinces mainly so what they do in Rangoon does not
matter so much to them.’

I left the dinner conversation early to meet fellow journalists
arriving to cover the already bloody Rangoon protests, besides my
computer and phones were on the last few hours of pinging away with
updates from the Rangoon protesters.
Today I am an armchair journalist and I am feeling guilty about it.
But for the time being at least massive amounts of information are
coming out of Rangoon from internet bloggers which the foreign
correspondents there cannot see.
I was in Rangoon in 1998 for ‘The Observer’ during and after the
Burmese military’s orgy of violence.  I still remember the confident and
contemptuous stare of one particular Burmese soldier challenging me to
be his next victim in Sule Pagoda Road.
I averted his eyes. To stare back would be inviting trouble.
I have been shot at and mortared by the Burmese Army, while filming
with the Karen ethnic majority for the BBC, and spent weeks in the camp
of heroin warlord, Khun Sa, (then America’s Most Wanted Man) in the Shan
States of Burma, as he happily traded with Burmese and Thai officers
alike this time filming for the Observer Film Company.
And like many I have witnessed almost at first hand the atrocities
carried out by the Burmese authorities against its ethnic minorities.
…..So it’s difficult to count an-ex Burma army man among my friends.

It’s also not difficult to understand why they have banned me from Rangoon.  I have been denounced by the junta at least twice.
(with anti-government monks 20 years ago)
In Burma’s border wars the Kachin, Karen, and Shan rebels don’t
always play by the Queensbury Rules, but one can understand that when
you take in just what the ‘Tatmadaw’ (The Burmese army) get up to.
But the confrontation between monks and troops in Rangoon is the one
conflict I can honestly describe as one of ‘good against evil’.
But Aung Kyaw Soe is right about one thing. The Burmese are scared about the west even though their fears might be misplaced.
Over 25 years ago 1985 Lieutenant General Saw Maung put decided to
double the size of the Burma army which was then ‘ a handful’ at 200,000
strong.
‘It is simply impossible to defend a country the size of ours with
only this handful of troops… therefore, what we have to do in the case
of foreign invasion is to mobilise people in accordance with the ‘total
people’s war’ doctrine.
‘In order to defend our country from aggressors, the entire
population must be involved in the war effort as the support of people
dictates the outcome of the war.’
The Burmese army now numbers 428,000 and has weapons from China, North Korea, Yugoslavia, Israel, Germany, Finland.
The Burmese Army also has  U.S. stinger missiles, originally destined
it is believed for the Mujahadin, and carbines, excellent for jungle
fighting, acquired from the U.S. in the 50’s as part of a ‘Military
Assistance Program’.
This was at a time when Burma’s notorious dictator General Ne Win was pulling all the strings.
The Burmese Army, rated the second best in southeast Asia to Vietnam, does not appear to have the support of its people though.
And if , a most unlikely event, Britain and the United States were
ever to go to war, its former allies, the Karen, Kachin, and Shan, who
fought with Orde Wingate’s Chindits, U.S General Stillwell, and the
British SOE (Special Operations Executive) against the Japanese, are
itching at the bit.
The older Karen still have a curious attachment to the British. I
don’t know why. The British sold them down the river into the hands of
the Burmese who have been persecuting them ever since.
And old Karen officer I knew, Major Aaron Po-Yin, used terms like
‘crikey’ and ‘golly-gosh’ and remembers his officers getting Christmas
hampers from Fortnum & Masons.
Major Po-Yin, ex-Burma Navy, won the Distinguished Service Medal for
saving two British SOE officers in a Japanese ambush.  I had the
pleasure to pick it up for him at the Ministry of Defence and give it to
him 40 years after the war ended.

‘So why did the British betray us,’ he asked.
I could not answer for Britain then, and I am not going to
now, if our sole support for the Burmese people and its oppressed
minorities is limited to political rhetoric and implausible sanctions.
Andrew Drummond and Andrew Chant  were monitoring the events in
Rangoon this week for the British press, the Canadian Broadcasting
Company, CBS New York, RTE, and BBC Regional programming.