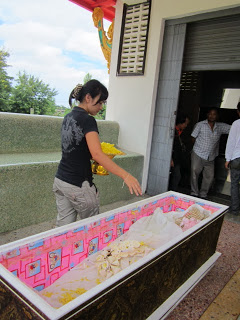 Sad news from Briton as the elderly 82-yer-old  mother of Briton Stephen Phillips, who was
gunned down outside his home in Isaan in August 2012, fears being evicted from her home while requests
are being made from Thailand for his £200,000 plus savings and contents ot his will.

Stephen Phillips’ death was reported by the British Embassy
on August 24th 2012.
On
August 9th Stephen Phillips, a retired Network Rail supervisor  had married Wilaiwan Parncharlie at Promprabsattroopai district
office in Baan Phai  district of Khon
Khen after what is reported to have been a stormy
relationship.
Then amazingly the following day  on August 10th he wrote a will at
the offices of lawyer Ms Peeranut Kraegkham leaving everything to his new bride
– that included his flat in Torquay, Devon, occupied by his mum 82-year-old Mrs.
Anne Kingston, his savings in Lloyd-TSB of £210,000 plus £18,000 in another
account.
Wilaiwan was accused of hiring the gunmen.  Police said they had no doubt of her
involvement.
And they appeared  to
have been some remarkable police work.
The Provincial Police Chief Major General
Kacha Thartsart took a personal interest in the case and this is how police
said they discovered she was the mastermind.
On raiding her house police found a 7/11 receipt for payment
to top up a mobile phone, plus a box which contained a mobile phone.
They were able to check the serial number and telephone’s
IMEI code. With that they were able to discover she used separate SIM cards to
contact, the fixer, the gunman and the driver.
Since they knew the exact time all the phones were topped
up, they were able to go to various 7/11 shops in the provinces of Korat, Kon
Khaen and Buri Ram and pick up the CCTV video of all those involved in the
plot.
Arrest warrants were issued both for the alleged gunman
Wicharn Parnicum and for the fixer Pornchai Gerdyoo. Both however were believed
to have fled to Cambodia.
The driver however full co-operated with the police and
confirmed their findings, police said.
But three months ago the Khon Khaen Provincial Court
acquitted Mrs Phillips of all charges.
Police Major General Kacha has since been transferred to Chonburi Province of Thailand.
Now, say relatives in Torquay, Devon, Wilaiwan, is demanding
the banks settle the terms of the will.
As Britain will not interfere in the judicial process of
Thailand, at least not officially, and the court has ruled in her favour, there
appears little to stop the grieving widow Wilaiwan going to Britain and also selling what has
become 81-year-old

Phillips’ mum, relatives and friends in Britain are
understandably fraught – particularly as they thought it was an open and shut
case.

MARRIED, MADE WILL, THEN
MURDERED – ALL IN TWO WEEKS