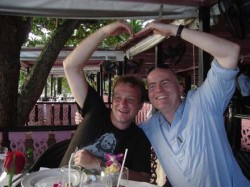 This is a blog only
The inevitable has happened. Well I guess it had to sometime.
The resort of Pattaya has always been an attraction to foreign film crews. They have to be sneaky. It’s a dangerous occupation down there, and as I think I mentioned before, pointing a camera in a wrong direction, particularly at a foreigner in a sex bar, can result in a severe injury with a telescopic lens.

But that does not stop producers insisting that, thirty seconds of scantily clad, nay even naked, girls in a go-go bar, can’t do any harm to the ratings.

To establish Thailand in their films, producer-directors used to use The Temple of the Emerald Bhudda. Now it seems a bit of totty helps too.

They are everywhere and they have now discovered that it is best not to look like a camera crew but to look like tourists.
Some producers can carry it off. Some cannot.  What has happened now is that one foreign television crew filming in Pattaya has filmed another film crew who have been filming in a go-go bar.

Not intentionally of course. They did not know the young couple in question was a film crew.

Stand up Gavin Hill, producer of ‘Big Trouble in Thailand’.  I mention this now because the man you caught on camera was one ‘Olly Lambert’ producer and the director of a ‘Cutting Edge’ programme on British television last night ‘Confessions of a Traffic Warden’ .  Now there’s a whipping boy if ever there was one, the traffic warden, that is, not Olly.
Olly and his ‘girlfriend’ were caught secretly filming in a place called  ‘BabyDolls A-Go-Go’ in’ Pattaya by the owner who confiscated their gear, which must have been above the value of a US$300 Panasonic.
Olly was outraged but admitted: ‘Well, I might have accidentally got shots of girls with their knickers off’.
When the charming, slightly sensitive and definitely indiscreet Howard Miller (He just can’t stop defending himself on the internet) Group Leader of Pattaya Tourist Police Assistants was called in to mediate, Olly Lambert came up with a strange tale.
He was looking for a girl, he said. A friend of his had recently died in the UK and had left something for her in his will.
‘What – and film her naked first?  Was he looking for a birthmark or special tattoo?

Of course, Olly may have a tale to tell. From what I read on the internet Olly seems to have some awards, but awards in TV are perhaps as numerous as available girls in Pattaya.
He had to wait a day for his camera and was an unhappy bunny: ‘This place (Pattaya) is advertised all over the world as a sex tourist haven, but it is not okay to show it!’ he complained indignantly.
I think Olly may have betrayed his bottom line there if you pardon the pun.
But he has a point I suppose.  Pretty much all of the go-go bars in Pattaya have their own websites promoting their girls etc.  And if you really don’t care,  you can even have a birthday party there and get a picture taken looking exceedingly silly. There are a few up on the Babydolls website

These pictures will inevitably go up on the internet and it won’t be the first time a ‘wife left behind’ has found out what her her husband has been up to.
Now, before I sound totally hyprocritical, some years ago I did the Thai investigation for a programme called, rather unoriginally, ‘The Sex Slave Trade’ which was networked in the UK, and sold on to Australia and New Zealand.
Actually the victims of this trade were not from Soi Cowboy or Soi Thaniya. But the producer/director insisted on secret filming in these area from a blacked out van.
This was not without its comic moments.  First of all in Soi Thaniya the ‘reporter’ was instructed to walk slowly down the street casually talking to the girls outside each establishment.
He could not speak Thai.  Few of the girls spoke English, but many spoke Japanese. And not one single one of them would give him a passing glance, let alone open up a dialogue or let him into her bar.
Then came Soi Cowboy. This meant actually driving up the Soi again as all the food vendors had to move their stalls to make away.
We were going far slowler than walking speed, which attracted the attention of the Soi Bobby who kept banging on the sides of the van (above). We of course refused to open the doors and sped off into Soi 23.  I made my escape and managed to get back to have a late drink at ‘Moonshine’ with amiable cricketer Aussie Steve. Like Gavin, who parted company with Dean Palmer, the Executive producer of  ‘Big Trouble in Thailand’ I also complained about ‘The Sex Slave Trade’.
Finally if you want to see Olly defending himself, it’s all here on Episode 5 Part 1 of ‘Big Trouble in Thailand’
Gratuitous pictures: Babydoll.com