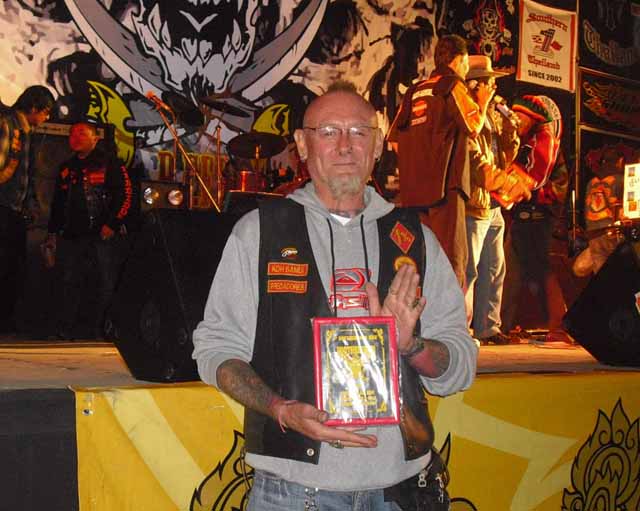 Thai police today launched a murder enquiry into the death of a Briton on a Thai holiday island after those who conducted a local post mortem covered up his the cause of his death and ruled that he had died by drowning.

Police on the island of Koh Samui ruled that Kevin Attew, 57, from Aldershot, Hants, had committed suicide after his Thai girlfriend said that was what he planned to do. Police said he drowned himself in a lake behind the resort area of Chawaeng.
Attew’s body was found last Tuesday.

But today a murder was launched after pictures taken by his best friend showed that the motor cycle enthusiast had been beaten to death first.  Further as the man -made lake was less than 30 centimetres deep – it seemed a poor venue  for an allegedly suicidal man when the Gulf of Thailand was only yards away.

Londoner Crispin Paton-Smith, publisher of the island’s real estate magazine and the best friend of Mr. Attew, said: ‘I was appalled to hear the verdict of drowning.  It was a no brainer. Kevin was beaten to death and his body was left on dry land for quite a while before being put in the lake.

Paton-Smith a former gunner in the Royal Artillery said: ‘I have spoken to his girlfriend and she continues to insist he committed suicide. He did not unless he beat himself to death. He would have had to dig a hole to drown himself.

‘Kevin ran a very successful bar and was the sweetest man in the world. He had no enemies.
“He was also a biker and he raised a lot of money doing charity rides for the Red Cross and other deserving causes.”

Police on Koh Samui tend to play down all crime on the island for fear of upsetting its lucrative tourist industry.

A spokesman for the Regional Police in Surat Thani on the mainland in southern Thailand said: ‘We are treating this as murder and have asked for the body to be sent here for a full autopsy.’

Kevin Attew, left, Crispin Paton-Smith right, with his girlfriend
Mr. Attew, who produced rock and advertising videos in Britain, owned the ‘Honey Bar’ in Chawaeng a meeting placed for bikers.  He was founder of the ‘Koh Samui Pirates’ motorcycle club, which consists mainly of middle aged men who like touring on motorbikes and like to wear their ‘colours’ but who do not involve themselves in some of the extreme practices with which these groups are often associated.

Thai police have at least once mistaken them for the same motorcycle gangs who have a reputation for crime in Scandinavia and the United States and arrested and jailed several of them four years ago. They included Paton-Smith, a member of the Koh Samui Bandidos, who was eventually released after police had to concede that the rumours were somewhat exaggerated…