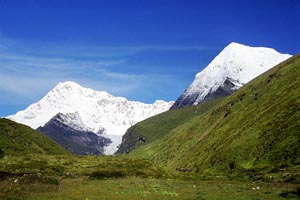 Today I hand over this blog to a missive from Roger Beaumont , my ‘hail fellow well met’ public school rebel friend, who used to work on the ‘Nation’ but left when the editors decided they could produce an English language newspaper with a designer from Milwaukee and without too many troublesome English language sub-editors and columnists.

Searching for perhaps eternal youth, or the meaning of life etc, lovable and always upbeat Roger, is now ensconsed in Thimpu, and the picture postcard land of Bhutan, the Land of (extremely exaggerated I suspect*) Gross National Happiness, aka, the Land of the Thunder Dragon. I think he went to the airport and decided just to get the third flight up on the display board, which is what I did in my youth. Anyway, after first thinking, Oh F..k!, he is now learning about inner happiness, under a pile of yak fur.

Yes, Roger loves it there, But what the brochures do not tell you is to what degree winters can freeze your goollies. So I guess he’s also up there on the net seeking mail order Agas (public school you know) second hand hot water bottles, etc.  Red Cross parcels can be sent simply to Roger, Thimpu, the whole town knows him.  Visitors to see him however will still have to pay the Government rate of US$200 a day. Roger keeps in touch with a number of us while warming his nether regions squatting I suspect over lighted candles  liberated from a local temple.

Anyway he still appears to be watching politics in Thailand, so here’s a copy of a letter he has written to the Bangkok Post. It may have appeared in the letters page. I am just guessing it has not because I have not been reading the Post this week, but the Post is not heavily into self flaggellation.

So the  hills are alive with the ‘Sound of Roger’ and this also shows how Thai politics can really get to you.  Most foreigners  just head up to the top story of a local condo. Roger is amongst the highest mountains in the world.  Don’t do it Rodge, you’re out of it now, besides,  I’m buying the turkey tomorrow!

Footnote:December 9th. The Bangkok finally printed Roger’s letter today followed by two readers anxious to tell the newspapers sub-editors that Copenhagen was NOT the capital of Norway as the newspaper had claimed. Seems like they need some new sub-editors there too. (here too sometimes but you get my literals for free!)

*The land of Gross National Happiness is also credited with having the worst national dish, ’ema datsi’,  a concoction of yak cheese, chillies, and onions. I believe the affects of this dish also gave the country its ‘Land of the Thunder Dragon’ tag.

Dear fellows,
I have no idea, as of writing, whether this will make BKK’s Postbag/letters to the editor page or not. I would have liked to have written it in green ink on immaculate writing paper, and by the way, how do you spell garrotted?
Best
Rodge

Dear Sir,
To the surprise of no one, Thai politicians, like most politicians, only obey the law when there is no alternative because they believe they are immune from the laws which they have made. They have ambitions but no ideals and will always compromise any promise for self-interest.
They know how material benevolence can gain public opinion, but forgot how moral failure can lose it. So, the question is: how do bright, conscientious Thais actually feel when they see the betrayal or inversion of the country’s best values and dreams? How do they keep their scruples and intellect intact when reality deems that any act that’s immoral, as long as it succeeds, is alright?
Surely, morality is where it all starts and in many ways ends. If a Thai – and anyone else for that matter – doesn’t have a moral foundation, or if they are not knowledgeable about it, or don’t know how to control it, and don’t feel historically tied to it by culture or family, then whatever they do is not as valuable or strong as it could be.
The point is, Thai politics is not a public service, it is a private business, and if those who have done no wrong can find no way to punish those who have, then they are all as culpable as one another. Just knowing that moral grown-ups don’t need rules to tell them what’s right is like wishing for an outbreak of common sense in Parliament.

What we have today is manga politics, brimming with vain, loathsome, cartoonish,
manipulative, insensitive bullies throwing dung at each other of  their own making. They ooze entitlement but none of them are likeable or forgivable and yet they insist on being wai-ed every five minutes, demanding more respect than those fallen in battle.

And now they want guns. Good. Perhaps they’ll eliminate each other in one glorious shoot out over a mia noi in a Yasothon car park. I wouldn’t trust any of them with the TV remote. They are bereft of decency and beyond parody. Are these so called leaders, the people young Thais should look up to as an example?

If the future of Thailand depended on the intellectual quality of its politicians, it would end at about happy hour tomorrow night.

What brilliant men they are not.