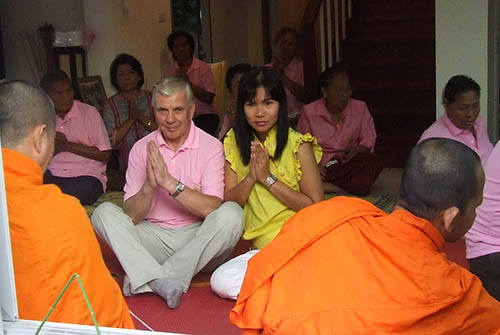 Kanokrat Nimsamoot Booth, aged, 41,  a former Thai daily newspaper journalist and magazine editor,  was arrested by Immigration officers at Glasgow airport last year,  jailed in a police station overnight, and then deported on a flight back to Bangkok.

But at the Upper Tribunal Immigration and Asylum Chamber  a judge has ruled that the deportation was illegal.

Kanokrat and Dennis Booth being blessedby monks in Thailand
In the initial refusal notice the Border Agency stated that Mrs. Booth, who arrived on a Residence Permit last May, had come to see a man, who was not her husband, and that the marriage to kilt-maker Dennis Booth from   ‘was no longer subsisting’.  Furthermore  Mrs. Booth had arrived in Britain without the knowledge of her husband.

Mrs. Booth agreed that there were problems with her marriage which needed to be sorted out, but her husband Dennis Booth, a kilt maker from Galashiels  was fully aware of her intended arrival and as he had said he could not pick her up from the airport, she was being picked up by the husband of a friend of hers. She denied an affair.

Dennis Booth ran a shop called ‘A’ the best fae Scotland’ in Edinburgh’s Royal Mile before moving to the borders and Galashiels where he runs ‘The Kilt Shop’.

Senior Immigration Judge Gill ruled that the action by the Border Agency was illegal. ‘Under EEA Regulations nothing short of a divorce terminates a marriage.’

The Border Agency did not have the powers to refuse her entry to Britain or cancel her Residence permit.

In Bangkok today Kanokrat Booth said she was pleased with the news. ‘Without any evidence I was accused of having an affair with another man, which was a lie, and I was humiliated. I was treated like a prostitute. I now wish to go back to Scotland, collect my belongings from my husband’s house and go through proper divorce proceedings’.

She said she was surprised at her husband’s actions as just three months before she was deported Dennis had sent her a very romantic Valentine’s Day message.  She would return to the U.K. when a visa was formerly granted.

‘But first I have to discuss this with the Ministry of Foreign Affairs in Thailand who are concerned at the plight of some Thai wives in the U.K.’

Mrs. Booth has been on a whistle-stop tour of Thailand giving lectures at Universities warning of the perils of taking on a foreign husband. She has also written a book called: ‘Miracle of Love – My husband came from the wrong button’ on the same subject.

It comes from an expression, she said, which was used by her husband – whom she met on a computer dating site, to insult her.  If she displeased him in some way, she said Dennis Booth would complain he clicked on the wrong button on the website and picked the wrong bride.