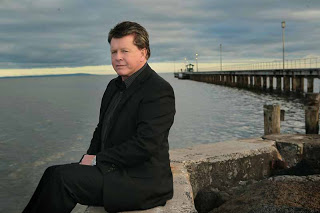 -SO WHY DID FORMER PIMP DECEIVE A THAI  COURT?-

So the respectable veneer has been removed from the newly scrubbed face of Scot David John Hanks. And today I can reveal how he deliberately misled a Thai court.

Drew Noyes, his so called boss, is not mafia as he was described in court. He is not that smart. He’s too small time. But he is a bully. His targets are the weak and elderly and vulnerable. And whether he and Hanks were working together operating an odious protection racket in Pattaya, as has been suggested in court, is neither here nor there.

The fact is that ‘Babyface’ Hanks WAS INDEED a pimp as he has been described on this site. This is not an allegation I would allow lightly. Currently he is suing me in a Pattaya court for calling him, or rather allowing a poster to this site to call him a pimp. For that I have to cough up Bt100,000 baht in bail on a complaint that should not have been allowed in the first place. 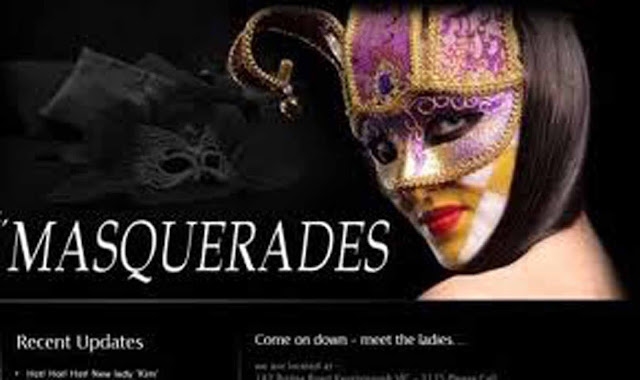 He has already given evidence. It is the evidence of a total stranger to the truth. When confronted in court with a website reference to  Masquerades in Keysborough, Melbourne, where he was named as the proprietor he shrugged it off.  David Hanks was a common name in Australia, he said. In other words he was saying: ‘Prove it’. …Schoolboy stuff. Well Hanks has to go back in the witness box.

Although my Thai lawyer was not on the ball that day – Hanks has been hoisted by his own petard.  His ‘Prove it!’ might have come from the playground of Girvan Academy – but it is not difficult to prove.

I already knew that Hanks was a pimp, not merely because he tells everyone.  I also checked his name as it appeared on internet listing for the owners of brothels in Melbourne which Hanks was shown in court.

Not only that when I checked with an Australian colleague who confirmed that in a story in the Age, Melbourne, and Sydney Morning Herald, the David Hanks they photographed admitted privately that he ran a sex business. 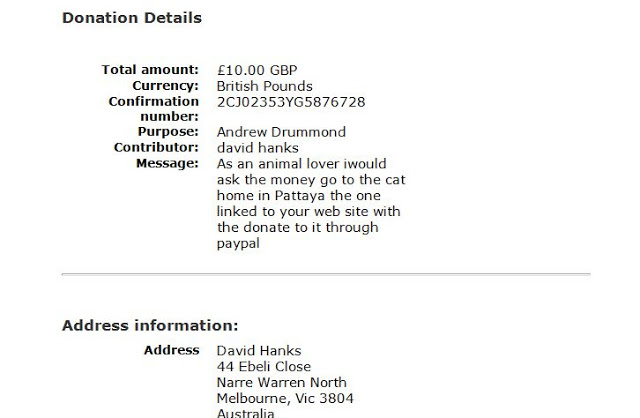 But that might have not been enough for a court of law. So I checked an email he had sent. Well it was not so much an email it was a Paypal donation of £10 which he directed me to give to an animal shelter.
It was a wheeze of course. The group of three, whom I have been exposing for some time, wanted to be able to expose me for keeping cash intended for an animal charity.

I paid and the money was duly receipted. That did not stop them making the allegation. But I do not suppose any people believed it.

In making the donation Mr. Hanks gave his address in Melbourne – and of course it’s the exact same address as David John Hanks the owner of Masquerades brothel in Keysborough. And Hanks is not a common name in Australia at all.

There are not any others. And there is certainly no other David John Hanks with the birthday on 26th of March 1948.

And no others that look visually to be the exact same person who appeared in an article in the business sections of ‘The Age’ and ‘Sydney Morning Herald’.

Pimping is not against the law in Australia. There is no libel.

Was he selling ‘Asian Pussy’? Well that’s what the advert read. The Masquerades webpage has been hurriedly taken down. Hanks has now finally admitted he owned Masquerades, selling it to some Chinese last year.

Hanks finally admitted to me yesterday (‘talking Scot to fellow Scot’ ) that he DID own Masquerades. That’s not the point, he said, you have called me a ‘maeng dah’ that’s a big insult here. You have mentioned ‘Asian Pussy’ – that would be illegal to do in Australia on the grounds of racial discrimination.

“Why don’t we come to am agreement that you lay off me?”

I think the discrimination laws relate to people rather than parts of a woman’s anatomy. It would of course be illegal to discriminate against employing prostitutes on the grounds of race but not illegal to say that people of certain races are available in your brothel.

In court Hanks was indignant: “A pimp is someone who forces women to prostitute themselves for money”, he said with a frown and feined pain.”

I have neither called him a ‘Maeng da’(Its not in my vocabulary but why would it be? I write in English)  nor wrote that he forced women to supply sexual services, but of course I have to continually put up with Drew Noyes’ lawyers seemingly deliberate mistranslations. 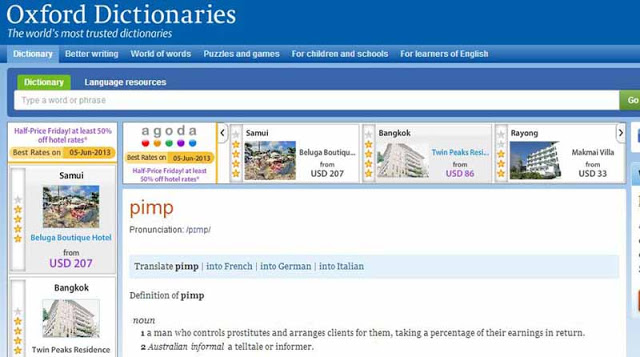 It is of course costing me a lot of money. No normal Thai could bare these libel laws on their salaries. So its no wonder it is difficult in this country to take on influential people. The libel laws are generally the sport of politicians.

But thanks to supporters here who have donated. I am scraping by – and the end is definitely in sight.

The Defendant owns a web site named http://andrew-drummond.com (Andrew Drummond) which is used to provide news to the general public. 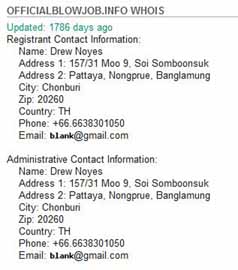 .
The Defendant, as owner of the web site mentioned above, allowed other person to post the above messages with intention to make others or third parties who have read them to understand that the plaintiffs are bad guys, engaged in illegal businesses, and have long sustained their living on hardworking of whores until they became specialized in prostitution and owns a brothel called Asian Hotties, which is not true.

(No it does not. The comment establishes that both David Hanks and Niels were pimps, which is a matter of record government and court record. And evidence will be produced on Noyes’ bar owning days. Hanks brothel was called Masquerades not Hotties. There is no suggestion it was called ‘Hotties’.)

In actuality, the two plaintiffs have decent jobs and own several businesses both internationally and in Thailand, registered lawfully as legal persons with tax payments to the government in huge amounts each year.
Their businesses are well known to businessmen and the general public both in Thailand and internationally, being well trusted and recognized in the business circle.

(AD: Huge amounts? I believe the tax comment will be seriously challenged. We looking at tax records. However court records in Pattaya show serious complaints about Noyes’ businesses. We will ask the plaintiffs to produce records of their international businesses)

In addition, the plaintiffs dedicate their time in giving social contributions, either private or public, the evidence of which will be submitted by the first plaintiff to the court at trial stage, while the second plaintiff is evidenced in social contribution pictures and certificates and any other documents received due to his contributions to the society as a whole, as reflected in Exhibit 2.

(Will be challenged also)

Subjecting the two plaintiffs to disrepute and becoming insulted and hated, such action also is a loading into the computer system computer data that is false and can be perceived by the third parties as an advertisement in documentary or alphabetical form, made visible by any means to broadcast in the Defendant’s web site in such a way as to pillory and libel the plaintiffs many times, including consecutive messages thereafter.

The two plaintiffs have thereby been caused to suffer business reputation damage until losing credibility and confidence from businessmen, substantially affecting their company revenues and social causes i.e. when in a social function, the chairperson and attending guests were reluctant to greet and speak with them, and affecting their and their families’ reputation as well.  Moreover, the two plaintiffs are looked down and loathed by businessmen, staff, Thai and foreign government officers, as well as the general public who knew, recognized and believed them.  (Complaint ends)

To see exactly the quality of people I am dealing with this is what Drew Walter Noyes wrote on the anti-Drummond website – www.andrew-drummond-blogspot.com 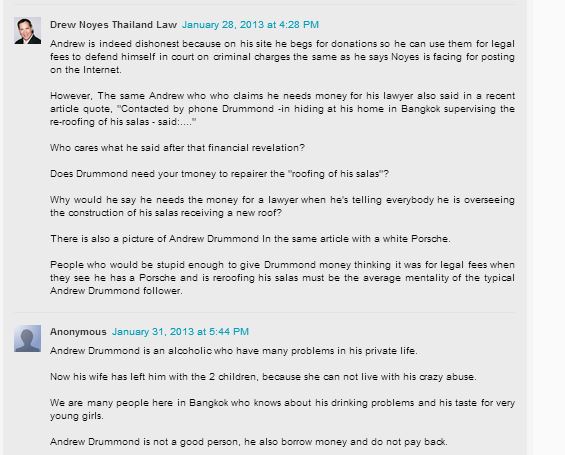 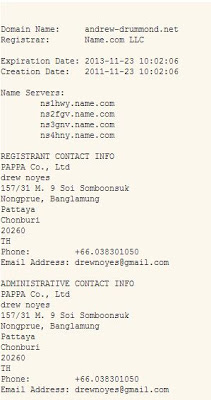 And finally while we have broached the subject of Drew Noyes’ registered website’s here is another one he registered but is yet to activate- now why would he do that?

It was sent in by a reader and adds to a collection which also includes www.sextouristapp.com so there is no telling what business he is going to go into next.