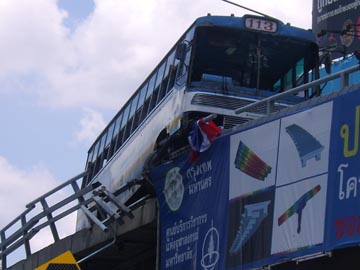 From Andrew Drummond, Bangkok
Link to Daily Express  Link to The Times
Link to Herald  Link to Daily Record
Ousted Thai PM fails to to seize back power. Britons trapped in Bangkok riots
April 13 2009
Pictures: Andrew Chant
A last ditch attempt by ousted Prime Minister Thaksin Shinawatra to
seize back power in Thailand seemed doomed tonight as tens of thousands
of his red-shirted followers changed their clothes and headed home.

After a day in which the Thai army, under the orders of Eton and Oxford
educated Prime Minister Abhisit Vejjajiva, cleared barricades set up by
the red-shirts and finally cornered them in a one square kilometre area
of the capital, Shinawatra’s ambitions seemed destined to fail.

Thaksin Shinawatra, a onetime owner of Manchester City Football Club
where he was known as ‘Frankie’ protested from exile in the Middle East
to both BBC and CNN that his followers were being ‘brutally suppressed’.

He claimed the army had fired live rounds at his supporters.  Army
officers insisted they had fired only blanks.  Hospitals in Bangkok who
admitted 94 people for injuries during the day, denied there had been
any fatality.  But there did appear to be gun shot wounds in two cases.

Two people were however killed in clashes between red-shirts and members of the public in a market area of Bangkok.

For over a week Thaksin Shinawatra, already banned from Britain, had
been urging his protesters, mainly from the poorer regions of North East
Thailand to ‘seize the moment’.   This was ‘the golden time’ to take
over the government, he urged from Dubai.

He had cultivated their support while in power by providing them easy loans and an innovative and cheap medical scheme.

Red shirted supporters  last week succeeded in disrupting a planned
meeting of  ASEAN (The Association of South East Asian Nations) and then
moved on to the capital encouraged by their success. They seized city
intersections, hijacked buses, and armed themselves with Molotov
cocktails
Protesters,  once numbering 100,000 supporters , had dwindled to 20,000,
and that number was decreasing further by the hour . Many protesters
could be seen leaving the area, having changed their colours.

And Bangkok’s silent population began taking a toll of the pro-Thaksin protesters as they fled the scene.

The city’s taxi drivers, the majority of whom are Thaksin reporters,
were the subject of bottle and stone attacks, and Muslim’s from the
Petchaburi Road area of the capital took the law into their own hands
after a Mosque was damaged, allegedly but red-shirted members of the
‘Democratic Alliance Against Democracy’.

While the battle is not yet over, the protest has now been contained.
The protesters have been confined in an area where supplies of food and
water have been blocked on what is one of the hottest weeks of the year.

But for Thaksin however it seems that a triumphant return is now off the
cards. The only place he has in Thailand is a jail cell. He fled the
country on bail after being convicted of corruption charges.

Tourists have been advised by the British Embassy to avoid Bangkok but
the warning could not help British travellers stuck in a hotel in the
midst of the rioting.

A Scots family trapped in their hotel in Bangkok told last night how
they felt in fear for their lives as the Thai army clashes with
red-shirted protesters in the Thai capital.

Tommy Adams, 46, his wife Melanie, daughter Rebekah, (correct) 14, and
Tommy’s mother-in-law Jessie Reid were trapped on the 18th floor of the
city’s Century Park Hotel, smack in the no-man’s land between the two
factions, when ‘all hell let loose’.

Said Tommy, a commercial fitter from Paisley:   ‘I was awoken at 2 am by
the sound of gunfire right outside.  I looked out of the window and it
was pandemonium.  The soldiers were advancing in an orderly way and
firing into the air.  The red-shirts were fleeing.

‘I was scared that they would try and flee into the hotel.

‘ There was a break for a while, I did not want to wake up my wife and
scare her, but then again early in the morning it started up all over
again.  We were high up in the hotel and we could see the protesters try
to drive a bus straight off a fly-over bridge.

‘Down below the red-shirts were singing and being urged on by their
leaders standing on the back of a truck. Then suddenly they made a move
to ram the army with a bus they had commandeered.

‘The army fought back with a volley of shots.  The mob rammed their bus
into an army bus and set it alight.  Again there were shots. I saw
people go down.  But I was later told they were only injured not dead.
It was total chaos. But at the same time the army seemed to be in
control.

‘They did not be shooting into the crowd, or if so they were selective as to whom they shot.

‘The hotel staff here are very nervous.  They have asked us not to leave
the hotel.  I have been to Thailand before,  the last time we went to
Hong, Kong, Singapore and Cha-am in Thailand, but this time we decided
to stay in Bangkok.

‘Essentially we are trapped and we hope the situation clears so we can
have some sort of holiday before we return home at the weekend.  All we
know is the Thais cannot agree on who should be there Prime Minister.
It’s been really scary.  I have been out to the hotel gates but the
family have stuck to their room or the rooftop swimming pool.  We are
barricaded in.’

Added Melanie Adams: ‘We just hope the red-shirted protesters do not try
to get in to the hotel. We understand most of Bangkok is peaceful and
other people are enjoying the holiday and partying in other parts of
town.  But here there are just soldiers with guns and armoured
vehicles.’