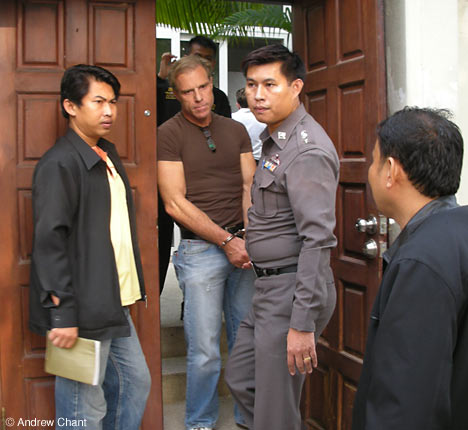 From Andrew Drummond, Bangkok, November 2 2007
Briton who ran a world-wide drugs syndicate from his mansion home in
Thailand was arrested last night as he was packing drugs for a ‘high
society’ Halloween party.
Marcus James, 48, from Lewisham, South London, was seized along with
his common-law Thai wife Linrat Chalwatworachot, 36, at his Ãƒâ€šÃ‚Â£1 million
mansion in the resort of Pattaya, 100 miles east of Bangkok.
Police seized drugs, drug making equipment, and all his assets worth
in excess of Ãƒâ€šÃ‚Â£10 million. It included stashes of gold and cash.

Marcus James was seized at his Ãƒâ€šÃ‚Â£1million mansion in the resort of Pattaya
Using sniffer dogs Thai police found Ecstasy and met-amphetamines
hidden in upstairs and downstairs toilets, in an office desk and a safe.
They also found the materials for making ‘Ice’.
Police Lieutenant Colonel Adisorn Nongsee said James admitted all as he had been caught red handed.
‘He was packing drugs for a Halloween party.
‘His cover was that he was running a travel company, but his real business was drugs.

Marcus James looks on at what the Thai police uncovered
‘He admitted to our investigators that he was making the drugs and
sending them to England and Europe where they were used at ‘high
society’ parties. He was also supplying high society parties in Bangkok
and Pattaya.
‘He had become rich from his business and been able to buy several cars and a 1903 Harley Davison motorcycle.’
Police said that although his house in Jomtien Palace Village
contained most of the equipment for making drugs they believed the
actually factory was elsewhere and they were still looking for it and
other members of the gang.
They have yet to weight all the drugs and formal charges will be made
later, but they so far had counted over 6000 Ecstasy and
met-amphetamine tablets.
Marcus James faces the death sentence in Thailand, but all death
sentences given to westerners have been reduced to life imprisonment.
Daily Mail