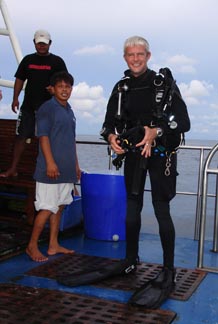 
The
British diver involved in the controversial ‘Open Water’ drama off the
Great Barrier Reef has been acclaimed as a ‘real hero’ by colleagues
despite accusations levelled against him in Australia of negligence.

The
holiday diving industry has been split as a row rages over Richard
Neely’s 19 hour ordeal in shark infested waters with his American
girlfriend Allyson Dalton, 40, after their dive boat sailed off without
them.

The
incident is compared to a real life drama made into the Hollywood film
‘Open Water’ which about a couple who did not survive after an almost
identical incident.

Critics
in Australia have said that 38-yr-old Richard Neely, from Swaffham,
Norfolk, and his American girlfriend were at best negligent, and at
worst guilty of planning their disappearance for the cash and attention.

And
this has infuriated colleagues in the diving community who are aware of
the Briton’s bravery in saving the lives of tourists in another ‘Open
Water’ drama – this time off the coast of Thailand.

Angry
colleagues in the international diving community in Thailand where he
last worked have described the attacks on him as ‘tacky’, ‘below the
belt’ and ‘insulting’.

‘To us Rich is a hero and a true one at that.   He will not say it but we can.  In
April 2005 he saved six passengers when their live aboard dive boat
Rhapsody sank,’ Swede Mona Fristedt, managing director of Oceanic Dive
Centre, in Karon Beach on the holiday island of Phuket.

The
incident happened off Richelieu Rock in the Surin islands in the
Andaman Sea. Ms. Fristedt added: ‘The boat started taking on water for
no apparent reason. Richard gathered the six passengers and seven Thai
crew and roped them together.  They were afloat for seven hours and many must have thought they were not going to survive the night.

‘Rich kept their spirits up and checked the stars explaining the situation to them all and keeping their confidence up.

‘Losing
a boat like this is an operator’s worst nightmare. But the passengers
were so impressed with Rich that none even ventured a complaint. Divers
were later sent down by the insurance company but they could not find a
reason why the boat sank.

‘As
far as diving regulations are concerned Rich was meticulous. And to
think he would want to go through a similar experience is quite absurd.’

Rich
Neely and his American girlfriend Alysson Dalton, 40, were accused in
the press in Australia of cashing in on their own negligence after
losing contact with their dive boat, off  Gary’s Lagoon on the Great Barrier Reef off Townsville, Queensland.

They
were told that they should have to pay the cost of their rescue which
involved search seven helicopters, three planes and six boats.

Central to the row is where and how they surfaced after their dive in Gary’s Lagoon.

OzSail owners of Pacific Star Charter claimed they surfaced in the wrong place and did not use their surface marker buoy.

But
both these claims were untrue said Richard Neely. He denied approaching
media agencies to sell his story but admitted that reported figures
upwards of $250,000 which the couple are alleged to have made could have
piqued a few people.

‘To start with, we were just 200m from the boat, which normally wouldn’t be a problem. We would just swim back.’

‘But
the wind and waves had got up and it just took us away from the reef.
We were signaling. I had my surface marker buoy, a very long inflatable
yellow sausage about two metres long, and I had a whistle.

‘We
were shouting and whistling but nobody saw us. We saw other divers
climbing back on to the boat and lifting out their equipment.

‘The boat stayed where it was, on a mooring, but we just kept drifting further away. There was nothing we could do.’

They watched helplessly as the charter catamaran sailed away.

But Ozsail’s Managing Director Fraser Yule insisted they did not use their marker buoy and disobeyed instructions.

‘The
dive brief for the dive from which Allyson and Richard failed to return
included strict and specific instruction from the dive instructor not
to leave Gary’s Lagoon.

It
was suggested that Rich had worn an extra heavy dry suit and had a
bottle of water and was thus prepared and may even have been planned his
own dramatic disappearance.

The couple had to on television in Australia to deny the reports describing them as hurtful and damaging to their integrity.

They
had Divers Alert Network Insurance which would automatically pay for
the costs of their rescue but suggested OzSail should also pay.
‘Our
insurance covers the rescue but we wouldn’t have been in that situation
had the dive company followed standard operating procedures and
therefore it’s not our fault that there was all of this effort made to
rescue us – it was the dive boat operators,’ she said,’ said Miss
Dalton.
Despite
the furor Neely’s colleague in Thailand where he worked as the team
leader and chief insructor on board the motor vessel Queen Scuba for
three years, are convinced he was in the right.
Briton Jamie Monk manager of Sunrise Divers, Phuket added: ‘People who know rich know he has integrity.  To
suggest he planned his own disappearance is below the belt and tacky.
Rich was undoubtedly the most popular and most experience diving
instructor on Phuket. Every dive shop on the island wanted him.   I just know how good he was by listening to the comments from the people he took out.’

South
African Tjaart Venter, of Calypso Divers, Phuket added: ‘He was
absolutely first class, a real leader. He was very thorough and would
not take any risks. I cannot believe he acted in any way irresponsibly
in Australia and it’s insulting to suggest he went missing deliberately.
Who would do such a thing in the Great Barrier Reef.’

Mike
Thomas, 30, from Newport, Wales, of Coral Grand Divers who worked with
Richard Neely living aboard the Queen Scuba for the company Coral Grand
Dive in the Andaman Sea until last month added: ‘He was very
professional. His pre-trip briefings were excellent. He would cover
every aspect of safety.

‘I
don’t know what happened when he was in Australia but I know he would
have done everything correctly. He’s just that sort of man.

‘He was very safety conscious. If he thought the conditions at any site could be dangerous he would change the venue.  He was also a very funny and likeable man and a pleasure to work with.

Another
colleague from Coral Grand Divers, instructor Jack Zielinski, 40, from
Helsinki, Finland said: ‘Rich was the best and funniest tour leader I
have ever had.  He was the spirit ‘Queen Scuba’.  Everyone who came into contact with Rich was the better for it. Now that he has gone it is everyone’s loss.’

Michael
Click, 35, a diving instructor from Phoenix, Arizona, who also lived
and worked aboard Queen Scuba added: ‘I cannot understand the fuss
coming from Australia. I guess its one of those cases where the Aussies
think they know best.

‘But
I will say this, the Aussie company are lucky it was Rich who went
missing. If it had been somebody else it would have been a fatality.’

‘Rich
is known throughout Phuket. He is the best tour leader there is. I have
been diving for 19 years but I would not be as half as good as I am now
if it were not for him.

‘Neither
he or Ali need cash from the media. Ali is a successful businesswoman
and has a thriving restaurant in Sacramento, California.’
Pictures:Andrew Chant   andrew@andrewchant.com , Coral Grand Divers, Richard Neely

Out of their depth – The Great Barrier Reef Mystery – Independent