Friday, September 16, 2016
OFFICIAL CAUGHT WITH HIS HANDS IN THE TILL – BUT WILL THESE COMPLAINTS DISAPPEAR?

On the day Thailand’s military leader said that the country was on the way to becoming a first world country a foreign business owner on the Full Moon Party island made an official claim of corruption against government officials.

Historical picture (Philip Blenkinsop) Mornng after a Full Moon Party. This picture was published in the UK press. Her parents were later in touch. They did not know their daughter was even in Thailand

The last straw he claimed was the arrival of five officials when the Deputy District chief Wisarut Dechun physically took cash (Bt 21,000) from his till. It was the third recent raid on his premises for cash, he claimed.

The British business owner who had been on the island for 26 years the latest raid was a raid too far.

After taking considerable advice the Briton, who incidentally went to prep school with former P.M. Abhisit Vejjajiva, decided enough was enough. Local greed, he said, appeared to have no limits.

This followed a more than 400 per cent across the board increase in payments to officialdom for running various full Moon parties on the island in the Samui archipelago. 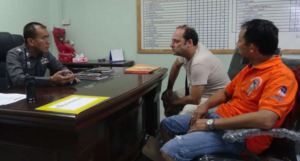 Formerly it was mainly police who took the cash including immigration officials who charged to allow foreign DJs to come and spin on the island.

But, since the military take-over, officials at the local amphur (district) have been cashing in directing that all payments are made to them.

According to local sources they have even tried to run their own full moon party, which turned out to be a flop.

The complaints appear to confirm that local officials are indeed the mafia in the Samui archipelago, with local police income down and restricted to what they can squeeze out of foreigners caught with drugs at full moon parties – estimated a few years ago at a mere million baht a month. 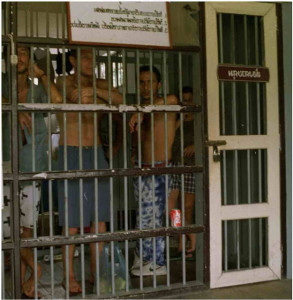 Caught smoking week – foreigners wait to pay in a lock-up on Koh Phangan. Western Union from parents back home will do nicely as police will wait

At the time of the murders of Hannah Witheridge and David Miller on Koh Tao, two years ago today, police denied the existence of an island mafia. And police cleared the influential Toovichien family on the island of being involved.

But of course this all comes down to the interpretation of the word ‘mafia’ in the Thai context. They may just be regarded locally as ‘khamoy suay’ – beautiful thieves. Most crimes against foreigners are supressed but some crimes are impossible to.

Yesterday’s complaints were filmed on Channel 7 and also carried by the Thai Rath yesterday.

The book is open on what will happen to these complaints. A lot depends on what support the district chief has, and whether these payments meet the approval of those in power.

Promoting Thailand as being on the road to the First World General Prayuth Chan-Ocha said:

“”The government and the NCPO (National Council for Peace and Order) have already had some things done and are getting other things done for the time being. The country now remains in a transitional period during which it would have the opportunity to become a First World developed country.
“I myself, members of cabinet and particularly the Ministry of Foreign Affairs have worked hard in the international arena to rebuild the country’s confidence and identity. We have positively responded, compromised and complied with the expectations and obligations to which we were earlier committed.
“We have adhered to universal principles under which we have solved varied problems such as the Illegal, unregulated and unreported fishing issue, substandard commercial aviation issue and human and ivory trafficking issues.”

COMMENT: I’m not so sure that the fishing industry problems have gone away, nor human trafficking, be it Rohingyas or women in the sex trade. But a ruling today by the Thai National Human Rights Commission that Burmese workers at a chicken farm in Lopburi were not subject forced labour, but did have to work overtime for no payment, suggest all is not right in the kingdom.

The meaning of First and Third World has changed over the years, but the “First World’ implies a relatively wealthy, stable and functional non-theocratic democracy with a reasonably well educated population, or just any developed country.

In the old days dealers just published menus of what they had available. But that did not look right for local police. Still nothing moves on these island without the authorities and ‘local families’ knowing – except perhaps the music scene

And the Third World, well that’s the underdeveloped nations of the world, especially those with widespread poverty. Or the group of developing nations, especially of Asia and Africa, that do not align themselves with the policies of either the U.S. or the former Soviet Union.

The Second World, was defined as those nations allied to China and Russia. But realistically the world has changed since these definitions were first used.

Thailand has not been a poor nation for quite some time and it is not on the UN’s list of poor or undeveloped nations.
It would however be considered a fully developed if it introduced a working educational system, dealt with corruption and a dysfunctional legal system, and reduced the gap between the rich and the poor.

Is the military government doing this? Education, democracy, the legal system and human rights have regressed. And it would appear the only people getting richer are those in power.