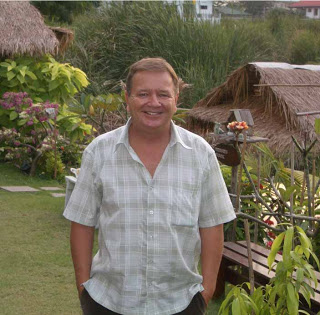 -‘HIS INVESTIGATIVE JOURNALISM IS RENOWNED FOR SHINING UNCOMFORTABLE LIGHT IN SOME OF THAILAND’S DARKEST PLACES’-
The New York based Committee to Protect Journalists is
backing Andrew Drummond, a British journalist who faces a series of law suits
and under Thailand’s criminal libel and computer crime acts.
Shawn Crispin, Senior Southeast Asia Representative said in
a statement:

media
criticism in Thailand. These laws, including the associated Computer Crime Act,
outrageously allow for imprisonment for mere news reporting and have engendered
a climate of fear and self-censorship across Thailand’s media.

“We stand
beside reporter Andrew Drummond, whose investigative journalism is renowned for
shining uncomfortable light in some of Thailand’s darkest places. We strongly
support his right to report without fear of reprisal and categorically condemn
the threat of imprisonment he now faces.”

Andrew Drummond has published a series of exposés on the website www.andrew-drummond.com and in the British press showing how foreign fraudsters claiming ‘influential friends’ have been fleecing visitors and expats in Pattaya.
Two convicted fraudsters and a former pimp

So far two cases against him  have been dismissed, a third has been
withdrawn, and judges are waiting for a fourth to be withdrawn. These cases
were brought by Drew Noyes, the American founder of the now defunct ‘Pattaya
Times’ and his wife Wanrapa Boonsu.

Said Drummond: “David Hanks is suing after I revealed he was a pimp in
Melbourne, Victoria, making money out of Thai women. Its not a crime in Victoria, but the proof is out there from the Australian Securities and Investment Commission so I am not concerned.

“Brian Goudie, who falsely claims to be a barrister and former Captain in the Royal Marines, I revealed was the fraudster born as Brian Goldie who was jailed in Australia for six years fraud.

Extortion
“This I actually published in the Scottish Sunday Mail, but
he is not suing them but me. His sentence and imprisonment are a matter of
record. He now is in the Thai courts with two charges of fraud against him, one involving a 75-year-old woman.

“Mr. Goudie (formerly Goldie) has also been described by the Australian Appeals Tribunal Deputy President as not a ‘man of good character’ – a ruling I cannot disgree with”.

“Drew Noyes himself was the subject of a major newspaper
exposé in the Wilmington Morning Star newspaper in the United States, where there is a
US$72,000 fraud judgement against him, long before he came to Thailand. He is currently in the courts in Thailand facing one case of fraud and one case of extortion.
“Wanrapa Boonsu, his common law wife. is bringing a case identical to one brought by Drew Noyes which has already dismissed. She too is facing charges of extortion and fraud and is already on trial with her husband,
“I am not concerned about losing any of the cases. That
is not the point. They are using the country’s libel laws to try financially
cripple me. The courts demand bail in criminal libel cases and that has cost me
thousands of pounds.
“What we are seeing is a group of people I have exposed
trying to get together to ruin me.  Luckily supporters have been generous and have
been donating though my website www.andrew-drummond.com but I still have to find the cash to fight the forthcoming cases, which would
of course not even be accepted for trial in Britain.

Drummond, formerly of Mearnside, Edinburgh, who was educated at the Abbey School, Fort Augustus added: “In 40 years in journalism I have never had to go through a libel case except in Thailand.

“Currently Goudie is suing Andy Mathews from the West Midlands. Mathews claims had lent Goudie the equivalent of over £10,000  – all the money he had. When he found out about Goudie’s past when he was not paid back he went to remonstrate with him.  As a result of that meeting he was charged with defamation, a case also in the courts at the moment.”

Bio Notes: Andrew Drummond has been a journalist and documentary film maker for over 40 years over 20 years of which has been based in Thailand for the Observer and The London Times, and the London Evening Standard.
In television production he was a founder member
of the Observer Film Company and for a period also worked as a producer for Fox
TV – The Reporters. He has also provided programming for, BBC UK, ABC Four
Corners; Channel 4, UK; Granada TV, UK; World Monitor TV, Sky TV, and recently the Crime and
Investigation Network.

In the UK he was the only journalist to walk out of the News
of the World newsroom during the Wapping industrial action at News
International in 1986.
He is the recipient of the Maurice Ludmer Award for
Investigations into Racism and Fascism. He lives in Bangkok where he is raising
three children. Donations to his fighting fund can be made through his website.
He can be contacted at andrew@andrew-drummond.com.

Warning: The site www.askthailandpolice.com is not operated by the Thai police. This site asks foreigners to report foreign crimes directly through the site. The site is actually operated by Drew Noyes through a company called One-Stop-Service-Centre. No police force in the world outsources crime reporting. Drew Noyes has an outstanding fraud judgement against him for US$72,000 issued by a judge in Santa Ana, California, and his career in Thailand is well documented. But more significantly Drew Noyes is in court now where the chief prosecution witness has stated that Noyes and Wanrapa Boonsu demanded 2.3 million baht or his place would be raided by the Crime Suppression Division!


Postcript: There is a wealth of clone and anti-Drummond google sites out there on the net trying, but failing, to discredit investigations here, authored by Brian Goudie and Drew Noyes. By all means read these anonymous blogs and come to your own conclusions as most people have.