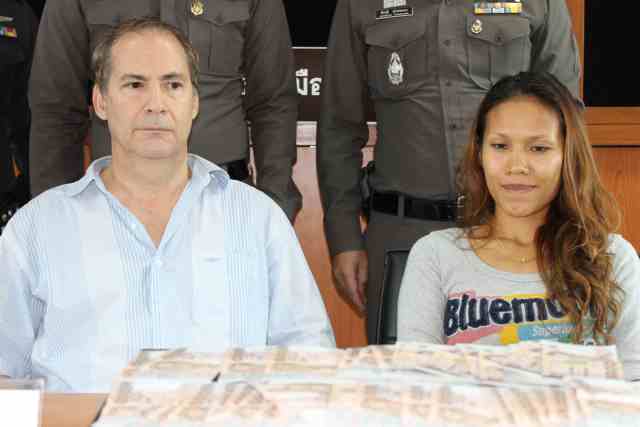 GAGGED! WAS THIS ARREST JUST IN OUR IMAGINATION?
March 11 2012

Were Drew Noyes and Wanrapa Boonsu arrested for extortion or not? Is the initial pay-off of 100,000 baht in our imagination?

A story about the arrest of Drew Noyes and Wanrapa Boonsu for alleged extortion of the Thonglor Clinic in Jomtien has been removed  from the Pattaya One news site.

Nevertheless the same story on Thaivisa, copied from Pattaya One has still gathered more than 15,000 hits to the delight of many relieved foreigners living in Pattaya.

So does this mean Pattaya has returned to the Middle Ages, where dark forces control what you wish to read or not? Or indeed did it ever leave them?

How many crimes are covered up in Thailand. How many just simply disappear?

The message being pointed out is very clear.

This blackmail extortion attempt did not take place.

If it was ever in a newspaper or on a news website it must have been in our imaginations.

So Drew Walter Noyes never demanded 7 million baht to stop a negative story about the clinic appearing in the Pattaya Times?

Are we that stupid?

Readers of this website will know this has happened before, when a string of American pornographers were arrested in Pattaya.  What happened?  Stories of their arrests disappeared and then so did the cases.

Will Drew Noyes resurface as the greatest living American in Thailand? I doubt it? Will he be scamming again?  Well thanks to stories here we think many people are now forewarned.

Did we imagine this couple were charged with extortion and overnighted in Pattaya police lock-up?

Will this story be blocked from other Thai newspapers? Will it appear in the ‘Pattaya Times’ partner paper the ‘Bangkok Post?

And to those making the threats I have only one question.  ‘Is this clown Drew Noyes really worth it?’

But so far they have only succeeded in keeping the news off one website –  but nobody is hopeful that the Pattaya People will run this story.

The story has also been blocked the Pattaya Mail and Pattaya People, owned by Prateep Malhotra and Niels Colov.

(18-3-12. Correction: I am informed the story has not been blocked by Pattaya Mail and will be in next issue. See letters below)

But it is here at the ‘Nation’

And above at Phuketwan –

And below at Pattaya Today

And, a few days late, the Pattaya Daily News has now got around to publishing – below.

So who was trying to gag the Pattaya Press?

Howard Miller boss at Pattaya One, Pattaya 105 fm is remaining tight lipped about who gagged him.

But my sources have been busy and it appears the following happened.

An American warden – the equivalent of a British consular volunteer –  Bobby Brooks, who was also a member of the US States Coastguard Auxiliary Reserves, was one of the first to request that Pattaya One remove the story.

Bobby Brooks runs Bobby Brooks Property Advisors Co. Ltd., in Pattaya and has display advertisments every fortnight in the Pattaya Times. I understand he did not call on behalf of the United States Embassy but in a personal capacity.

I would not have thought Brooks, who shares the same lawyer as Noyes (Paisan Thunnock) and is apparently a founder member of ‘Homeland Security’ would have had much influence over Howard  but if ever I were to purchase property on the eastern seaboard I would not be going to see Bobby.

Next up was a Thai politician and another advertiser in the Pattaya Times. But he was also representing one of the Thai people most admired by Drew Noyes and mentioned in one of his many internet biographies

Well, love a duck, if this guy is so dedicated to presenting terrorist attacks within the United States should not he be at least trying to help Americans under attack by their fellow countrymen here?

Now some good news for Drew Noyes
This month his horoscope says: ‘This should be an up period for you with almost everything going your way for a change. Don’t let an occasional moody feeling spoil your chances of success, however if you feel a blue period coming on, try to overcome it by taking part in something you enjoy very much. (Sky-diving?). Expect an important call concerning future employment, but don’t be too quick to change from your present position.”