BRIT DEATHS, HOSPITALISATIONS,
UP BY 31% IN THAILAND-


It is of course a misnomer. Sounds like a school report on Brits abroad doesn’t it? I detect a little condescension. It sort of deflects from the real issue which is what does the Foreign Office do to and for British citizens abroad.

Well for a start they produce this report, a full seven months into the following year and of course a congratulatory message to Foreign Office staff from Foreign Office Minister Mark Simmonds:

“I am proud that our staff continues to offer vital support to thousands of British travellers and residents around the world.”

As far as Thailand is concerned the number of hospitalisations and deaths of Britons has gone up 31 per cent in a year. 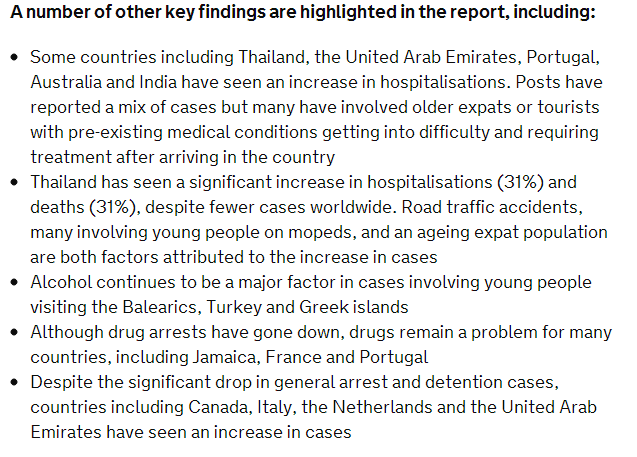 Its difficult to grab a headline from that lot.  But I am reassured by the status quo that alcohol continues to be a major factor in cases involving young people visiting the Balearics, Turkey and Greek islands. I am sure I would have stopped going their if it wasn’t. Clearly no stone is unturned in this report. Then there is this:

Proportionately?  The figure is therefore meaningless, but don’t worry Thailand is fast catching up in the reality stakes.

As most Brits abroad are getting clobbered on their pensions, many Brits are being refused medical cover and medical insurance is going up at least 10 per cent a year for local hospitals who have adopted creative accounting as a new art form – expect British pensioner deaths to soar.

For your own version of the report – go here

Overall Brits could do better is the conclusion one comes to. So perhaps could the FCO.