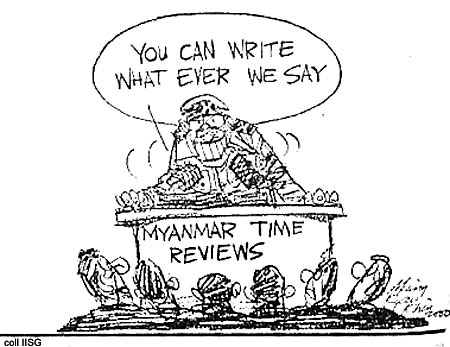 Following a report here (written from Thai copy sent by our reporter in Pattaya) also sent to the British newspapers, some people down in Pattaya seem surprised that this event was not reported in the local newspapers, though I believe it has been now.   A thread even went up on Thaivisa.com http://www.thaivisa.com/forum/Press-Censorship-Pattaya-t315227.html.

I never seem to be surprised that people down on the eastern seaboard put so much faith in their local press, when an even cursory look at some of the ‘hail fellow well met’ owners, and past owners, and their agendas, should ring massive alarm bells all around.

Censorship in Burma: Courtesy Msf/Bart
We are not in Burma so the censorship in Thailand is mainly self censorship. Of course you could get shot or ruined if you break the rules!

Actually one newspaper’s publish agenda is to protect the city’s image against harmful foreign publicity and has been harping on about the ‘family resort’  ever since its conception, though its former chief reporter had a gun, a stun gun,  and interesting sidelines, both as a tourist policeman and an agent running a sort of SOS business for foreigners in the sh*t.

Ask yourself this. In trouble in Pattaya? Victim of injustice, fraud, or other crime? Need to expose a villain?  Would you go to your local paper for help? The answer is no, which is why many people contact their papers back home.

Want to perpetrate a scam?  Sell a puppy (in all senses of the word) Whitewash your past with a personality write up: Answer: Yes.

This seems to have been leapt on by a couple of posters as a prime example of dishonest or exaggerated reporting.  I was particularly intrigued by a post called ‘Aussiechick’ who asked people if they remembered my World Cup stories………..suggesting another case of maybe exaggeration or whatever.

Aussie Rules? No perhaps she meant the ‘Chelsea Headhunters’,  a bunch of thugs who ended up in Pattaya after being found not guilty on conspiracy to cause affray charges, when police were caught ‘verballing’ them (verballing: essentially inventing quotes).  They have long since diminished, victims to Thai women and the recession, I gather.  I understand also one or two were a little miffed to have been nabbed by Japanese police at Narita airport on the way to the World Cup there, way back when.  They put it down to me, but its much more likely to have been the British NCIS – The National Criminal Intelligence Service.

Stan the Monkey
ThaiVisa even gave a convicted paedophile better known in the UK as ‘Stan the Monkey’ space to rant about me on the same thread.  He claimed I did a story about him without even meeting him etc.  My story was totally false etc.  For those who saw this rant, which has now been removed, here is the link and pictures of the first of two confrontations, working with the Metropolitan Police Women and Juvenile Division in Bangkok and FACE – Fight Against Child Exploitation.  They could have placed charges against him in Thailand by the way, but the Thai authorities found it a lot easier just to deport him for working illegally. Now its apparently my fault he cannot come back.  Or have you Alan?

And there was also this post from some guy calling himself Manarak (Anorak perhaps would be better) which I cannot resist quoting.

He says: ‘We don’t have any details on what precisely happened to this girl or how it happened. This makes the whole story suspicious.
The papers normally would pay a good price for a story full of disgusting details, but no… no story. Strange?’

A little evidence here courtesy of ThaiVisa reflecting on the level of argument some of their members. :-).  Still,  if the posts keep coming in on mass the webmasters can cash in on more of those ‘Bangkok massage’ adverts.

But  is there likely to be a happy conclusion in the rape case ? No. It is very rare. The ‘raped’ woman asked for no publicity. The Pattaya Police did not want the story publish. In low profile cases like this there is no chance of having the case fast tracked.

So if she were to prosecute the case, there would only be her evidence, and perhaps the other evidence of what was stolen. She might have to wait out a year, even if the defendants pleaded guilty, two years or more if otherwise. If she left the country she would have to pay her air fare to come back.   And what was she doing alone in walking street at 12.30 they will ask?

It would be an absolute nightmare.  So lets face the facts. For a foreign woman sexually abused in Thailand there is little recourse. Do not expect the same justice as you get back home. Don’t lose your friends. Be safe.

Its tragic – but true.