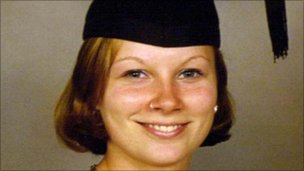 British police have asked the Department of Special Investigations to DNA test a Thai University professor to rule him out of an investigation into who killed and raped a young Welsh university graduate in Chiang Mai.

Officers of Dyfed-Powys Police in Mid-Wales, seeking closure on the brutal attack on 23-yr-old Kirsty Jones in the Aree Guest House in Chiang Mai in August 2000, wish to clear up ‘rumours’ relating to the Professor which have been widely broadcast on the internet.

The move follows the DSI’s reluctance three years ago to follow a British request to do a mass DNA  testing in the Chiang Mai area.

The lecturer in question, it has been alleged, was the ‘second man’ seen hanging around outside the Aree guest house in the early hours of the morning she was murdered.

The person reportedly accompanying him, a Thai tourist policeman, has already been DNA tested and did not match the DNA profile of the killer.

The mother of Kirsty Jones and Welsh police officer Chief Superintendent Steve Wilkins (on the left in the picture with a Scene of Crimes officer in Chiang Mai) and Detective Superintendent Steve Hughson of Dyfed-Powys police have been frustrated at the lack of progress in the investigation which in 2005 was handed over to the DSI by Chiang Mai police. The matter was raised in the British parliament.

Both the DSI and Dyfed-Powys police have a complete DNA profile of who they believe is the killer. The profile is of a man of Asian origin which was known even when Thai police were arresting a series of foreigners.

The request for a new DNA test was made several weeks ago after an Australian former resident of Chiang Mai made the claims on video which he put up on YouTube . He has stated he is willing to talk to Australian Federal Police.

British police are cautious of the latest ‘lead’. The claims come from a foreigner who became totally disenfranchised with the country after his stay here and may be mendacious. Other items which he put up on the internet would almost certainly result in a charge of lese majeste if he were to return.

The Australian submitted a short on-camera video onto Youtube identifying where the academic works and stated:

‘I have enough reason to believe he killed the Welsh lady back in 2000. He is the younger brother of the Inspector of Tourist Police at the time of the murder. The DSI have all the details but they will not act in case I was wrong.  I will not remove this from the internet until the British Embassy oversees a DNA test of the lecturer.’

The video was captioned: ‘How to Get Thai Police to Solve a Murder’.  The video has now been removed from the internet.

He said he gave the policeman a CD with copies of newspaper stories referring to a tourist policeman being at the murder scene at the time with another person.

The Aree Guest House. It has now been renamed.

He said he had confronted the lecturer with the accusation. The professor had reacted angrily and this was part of his decision to leave Thailand.

The tourist policeman in question was and is very well known to foreign bar owners in Chiang Mai, and is known for dropping in at many bars and guest houses for a drink.

Nearly two years ago he was filmed for the British TV series ‘Big Trouble in Tourist Thailand’ helping foreigners with their problems in Chiang Mai, but the producers say they had to drop most of the footage because he did not fit in with the programme and image of police it was attempting to portray.

Police hope the Professor will voluntarily provide samples for DNA testing. That way, Glynn and Sue Jones, the parents of the murdered girl , Gareth, her brother, Welsh police would not lose further sleep believing that not every stone had been turned.

Kirsty’s mother (right), Mrs Sue Jones, from Tredomen, Brecon visited Thailand in 2005 with Dyfed-Powys Police in the hope of creating new interest in the enquiry.

All said they were impressed with the hospitality and sympathy afforded by the Thai people, but remained puzzled as to why the murder could not be solved.

The original investigation into the murder of Kirsty Jones was marred by a series of incidents after which a British Embassy official, was quoted by the ‘Nation’ as saying the investigation was ‘shambolic’. The Embassy later denied it had issued such a statement.

Press and non-forensic police were allowed to trample over the crime scene, a Karen tourist guide claimed he was kidnapped and tortured by police in an attempt to extract a confession. The owner  of the guest house Briton Andy Gill, and the manager Surin Chanpranet, were initially jointly charged with the murder, but had to be released when they did not fit the DNA match.

Later it was revealed that Andy Gill has been sent Ãƒâ€šÃ‚Â£12,000 by his father to help with his release. Chiang Mai provincial police, reacting to the report in the British press, later held a press conference to say that ‘Mem’ Kasemjit, Gill’s one-time girlfriend, stole the cash.

Andy Gill’s girlfriend ‘Mem’ with the cash. She is now married to a Scot and lives in the U.K

In a speech to the British Parliament in June 2007 Roger Williams, M.P. for Brecon said he was unhappy with the work done on the case by the DSI.

‘Dyfed-Powys police have constantly to suggest lines of enquiry to the DSI,’ he said, ‘It is a constant struggle to obtain accurate information from the Thai authorities. It appears that action takes place only after pressure is placed on the Thai authorities by the UK Police, the family, or the Foreign Office.

‘I have come here to ask (the British Government) to lobby the Thai authorities to put maximum effort into bringing the perpetrators of the crime to justice, bring closure to the family and make Thailand a safer place for young people and tourists to visit.’

He said Kirsty’s parents had asked him to express their frustration adding that a request by Welsh Police for a mass DNA screening in the Chiang Mai area had never materialised.

Ian McCartney, Britain’s Minister of State, Trade and Investment, said he wished to assure the family that an investigation into the murder continued.  He would not wish to comment on the professionalism of foreign police forces. ‘I need to maintain good relations’.

He wished to remind Parliament of the mission statement of the British Foreign Office – ‘To work for UK interests in a safe, just, and prosperous world.’