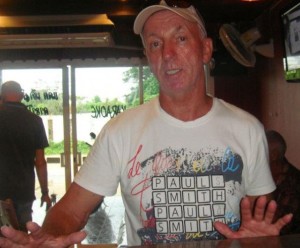 A 57-year-old Scot has voluntarily deported himself from Thailand after being branded ‘a danger to society’.
John Joseph Alty, from Glasgow, who ran a guest house called ‘The Squealing Pig’ in Hua Hin 180 miles south of Bangkok, was today back in Britain after being escorted to Bangkok International airport by Thai Immigration Police.
He was accused of being a suspected human trafficker.
He returned to Britain ‘voluntarily’ after paying his own ticket but was being held in custody and was awaiting deportation.
Alty was arrested at his guest house in May after an official of the U.K. Border Agency in Bangkok acting on information received notified Thai Immigration Police of his whereabouts.
The U.K.B.A. said the information was passed on for ‘law enforcement purposes only and for the Thai Immigration authorities to consider ‘the suitability of Alty to remain in Thailand’. The letter also stated:

The letter further requested that its contents ‘remain confidential and not be released to a third party or the media’. However details were released at a press conference in Bangkok where Immigration police said he would be deported as a ‘danger to society’.

Part of the leaked letter from the UKBA to Immigration Police

Alty had earlier been deported from Australia in 2007 back to Britain after serving two thirds of a three year three month jail sentence for drugs trafficking.
He had been arrested at Melbourne airport in 2005 with two bottles of cognac which, when examined, were found to contain 2 kilos of methamphetamine with a 36.5 per cent purity.
He pleaded guilty. His lawyer Theo Kassimatis said: “It was stupid, momentarily stupid. It was opportunistic … and out of character.”

Friends of Alty tried to fight his case. They claimed a judge had ruled that he was ‘not a danger to society’ and that no evidence has been presented saying he was involved in human trafficking, but he was still detained in the Immigration Detention Centre in Bangkok.
As he had served jail time abroad he could have been deported anyway without recourse to the courts.

He apparently changed his mind about staying in Thailand after a Briton was found dead while in solitary confinement at the Immigration Detention Centre in Bangkok.
Richard Ian Cook, 28, had been arrested and was awaiting deportation in connection with a raid on a Bangkok ‘boiler room’ – an illegal share trading centre.
Cook had been put in solitary confinement after shouting at the guards. He is reported to have died from head injuries which the authorities reportedly said were self-inflicted.

A UKBA spokesman said: “We do not comment on individual cases.”

But added: “The UK Border Agency co-operates with other governments and overseas law enforcement agencies to help secure the UK border and also to help protect the well being of citizens from other countries”.

Alty is the 13th Briton to have been returned to the U.K. from Thailand in the last eighteen months either by voluntary deportation or extradition.
The Serious Organised Crime Agency, working on information from a number of British police forces, has successfully sought extradition for a number of child sexual abusers.

The most recent case was of Paul Martin Smithers, 59, from Llangeinor, Bridgend, Glamorgan, one of Wales most wanted men. He was escorted back to Britain by Welsh police and sentenced to 12 years for child rape and assault at Cardiff Crown Court.
Smithers had been on the run in Thailand and Bali for ten years. Almost incredibly he had been given bail between conviction and sentencing.
Finally sentencing him Judge John Curran said he had shown ‘no remorse’ for his crimes.
Also involved in Smithers’ arrest at Bangkok airport last November were UKBA officials who have been operating a scheme called RALON – Risk and Liaison Overseas Network  in conjunction with Thai Immigration Police.
Glasgow Herald  Daily Record