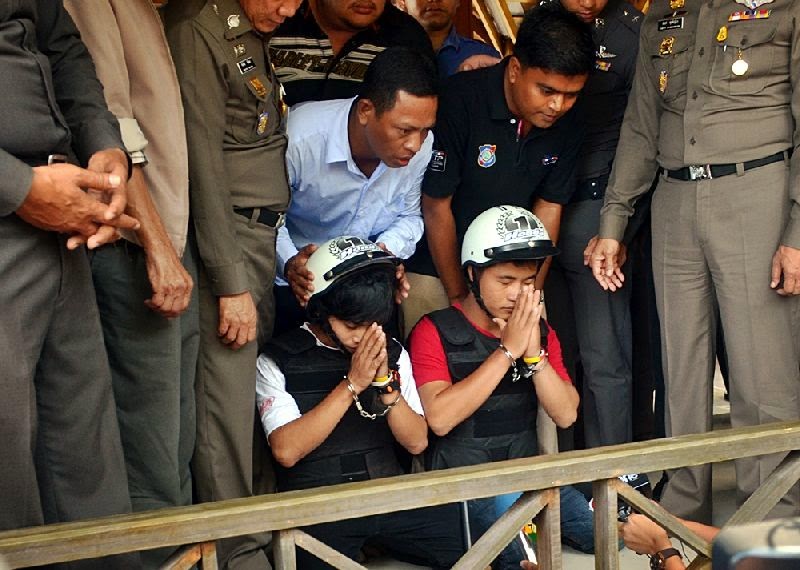 Three of the out of group of nine Burmese who were friends of the two who now face the death penalty in Thailand for murder of two British backpackers were tortured by Thai police six days ago, it was claimed today.

As police prepared to showcase their investigation into the barbaric murders of Hannah Witheridge, 23, and David Miller,24 and the double rape of Hannah, a statement from the Burmese community on the island claimed that three friends of Win and Saw, the accused, were tortured by Thai police who beat them physically and poured boiling water over them.

They were all playing the game of takroh (kicking a ball made out of bamboo cane) when the game was raided by police last Saturday night. And the two suspects now facing death by lethal injection were innocent, says the Burmese community

Their statement was backed by Aung Kyaw, President of the Myanmar Migrant Labour Association in Thailand who said: ‘There are very suspicious circumstances’* and called for an independent investigation to verify Thai police claims.

Early today the statement by the unnamed Burmese was issued to the British and Burmese Embassies in Bangkok. It has been seen by British Ambassador Mark Kent. The statement and photos have also been seen by this site and are in limited circulation.  Aung Kyaw has called for an independent investigation and independent monitoring of the DNA.

There is a genuine fear of reprisals among the Burmese on Koh Tao. Police have yet to fully name the two suspects in their custody although they have now paraded them for the media.

The statement, the source of which has been identified to the Ambassadors read:

“On 27th September at 7pm night, nine Rakhine ethnic migrant workers living and working on Koh Tao irregularly (without documents) were accosted by a group of Thai police officers, who tried to catch them when they were peacefully playing cane ball (takroh).

“Six among the nine migrants trying to run away were caught by police. Another three migrants were able to run away from the police to escape from the arrest.

“Three migrants from the six migrants caught were physically beaten and their bodies scolded through pouring over hot boiling water as a means to get information about the three people who had run away from the police arrest. All were then they were released.”

“(Name redacted), an elder of the Rakkhine migrant community Rakkhine who (redacted) recorded three Rakhine victims and their wounds from beating/scolding and sent their photos to Myanmar embassy.

“As soon as he sent to the Myanmar embassy, the Embassy called to Thai police department for the abuse and Thai police replied to Myanmar embassy that they didn’t know which group had been beaten and who beat the migrant workers and they said that they will investigate the case.

“According to (name redacted), the three Rakhine victims who were abused were told that the problem will become bigger if the Myanmar embassy were involved in the current case. Also they didn’t have any firm evidence so they didn’t wish to report their case to the embassy.

“(name redacted) then met the 3 Rakkhine workers who had ran from police and found that they had no documents so he suggested them to leave from Ko Tao Island as soon as possible if they didn’t have a passport and also no employer. He also reminded them that Thai police were searching to catch them. One of the three immigrants then left the island urgently as they had no documents.

“As for yesterday/today information in the media about arrests, the community then rang us vigorously and said that 3 Rakhine guys were caught by police; two were caught in the jungle, one was in Surat Thani, and all have been accused of murder. The migrant community very upset as they believe the three migrants have been framed for the murders.”

Murder investigation or the greatest show