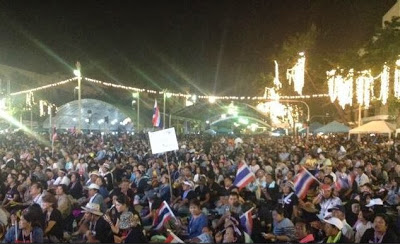 WHILE ARMY WAITS IN THE WINGS 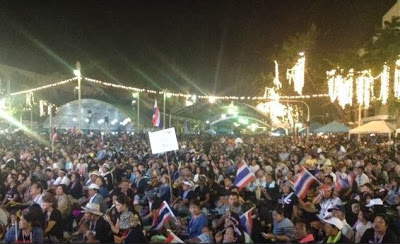 A warrant for the capital offence of high treason was issued last night against Bangkok protest leader Suthep Thaugsuban as anti-government protesters besieged Government House and the Metropolitan Police Headquarters in Bangkok.

As anti-government protesters approached barriers at the police headquarters in Bangkok with a back hoe and bulldozer and others made attacks on Government House, protest leader Suthep called a temporary pull back of supporters fearing harsh retaliation.
But then shortly after 7.30 pm shots were reported and  9mm. bullets was found in two protesters who had been taken to the Rama 9 hospital. There were fears, as has happened before in 2010, that hired guns  or ‘Men in Black’ could be brought in to set troubles off.

Anti-government protesters were earlier beaten back by police with tear gas and water cannon spraying purple dye and rubber bullets in Bangkok today after a weekend in which four people are reported to have died and some fifty others were seriously injured. 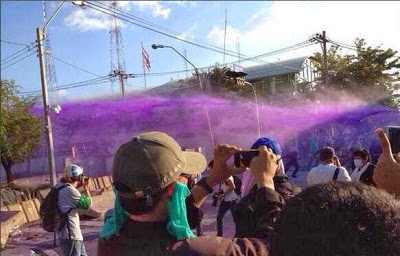 And protest leader Suthep Thaugsuban was reported to have given the government  of Yingluck Shinawatra two days to leave office after a meeting arranged with her by the army last night.

Suthep said afterwards: There was no negotiation and no compromise. This is the only one and there will be no more until a victory for the people.’

“From now on, the great people’s movement will help protect the Constitution and cooperate with the PDRC to change the country into a perfectly democratic one, and reform the country for the sake of justice,” he said.

The PRDC is the People’s Democratic Reform Committee whose protesters are being held back by police run by CAPO, the  Centre for Administration of Peace and Order, whose spokesman Maj-General Piya Uthayo said: “We are in control.”

Meanwhile the army has told both sides to stop what they are doing.  Army chief General Prayuth Chan-ocha asked the police to stop using tear gas and the protesters to halt their activities. 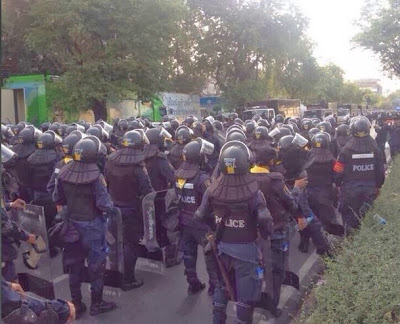 Previously Suthep had reported that the protest wanted an end to Thai styled democracy, and end to the rule of the Shinawatras, and a government of ‘good and worthy people’ elected by a People’s Council.

Ugly scenes were repeated as protesters confronted police both at the National Police headquarters and at the Metropolitan Police Headquarters near Government House. Protesters brought in a back-hoe to clear police barbed wire and barricades. Some could also be seen with Molotov cocktails.

The protests continued after over 100,000 red shirted government supporters abandoned a planned weekend counter demonstration on Sunday and instead went home at the order of their superiors ‘to avoid bloodshed’ – many being bussed back to North East Thailand – Yingluck’s power base.

On Friday night and Saturday morning at least four people were killed in the clashes near Ramkhamhang University on the north eastern outskirts of Bangkok.  A 21-year-old student was shot and five pothers injured by a lone gunman. But the University Rector later confirmed that 3 students had been killed over that night. Police presence was poor, he said. 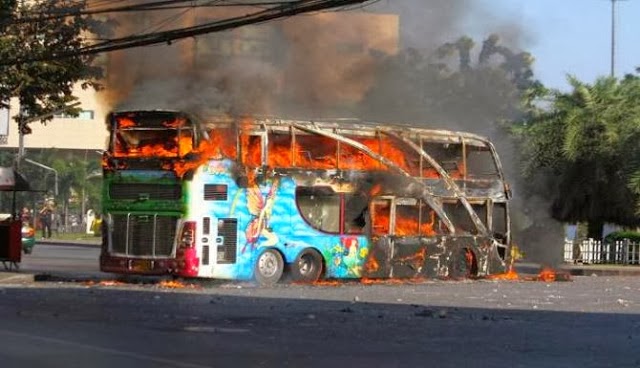 A Red shirted man was found also dead in a bus.

Meanwhile the United Nations has shut down its South East Asia Regional Headquarters in Bangkok and hundreds of schools have been shuttered.