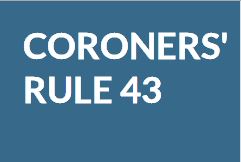 BUT BRITISH MUMS OF LADS KILLED IN BUS CRASHES IN THAILAND WILL NOT GO AWAY.
-TAKE THE PLANE – THEY SAY

Two years after a British Coroner sent a ‘Rule 43’ letter to authorities in Thailand making road safety suggestion in relation to bus travel – not even one acknowledgment has been received.


It appears that the letter, also translated into Thai, has either been filed or binned. But it has not stopped the mothers of four young British lads killed by negligence in Thailand from actively campaigning for greater warnings about road travel in Thailand.

Below is the letter (scroll down to the bottom for the Thai version) sent by the Coroner for Brighton and Hove in West Sussex to the local police investigating officer, and also the Transport Office for Ranong Province as well as British authorities. 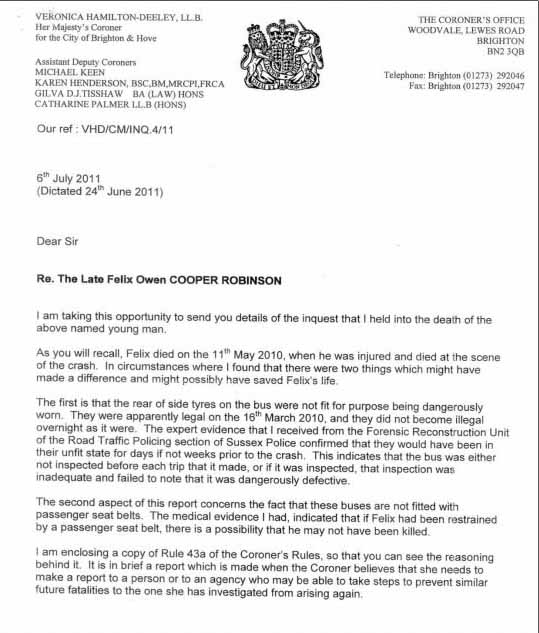 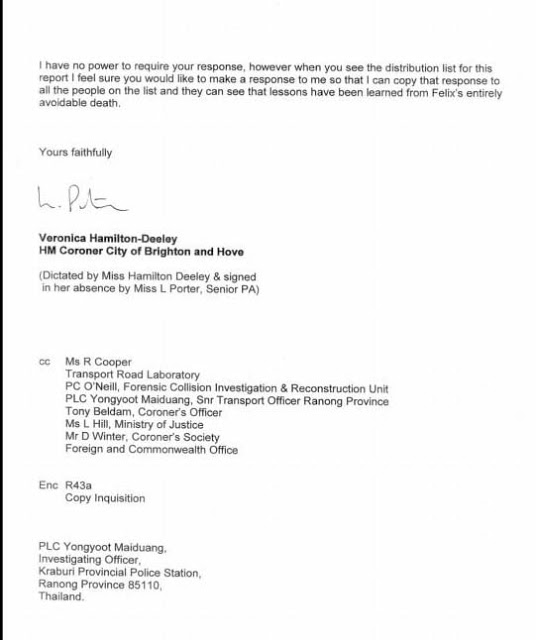 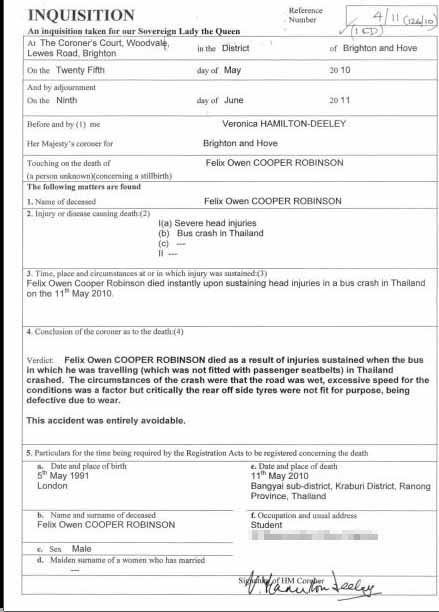 This was after the inquest into the death of Felix Cooper Robinson, 19. The bus he was travelling in had bald tires and was travelling in excess of 100 kpm when it careered off the road. The seats were not fitted with seat belts of course. 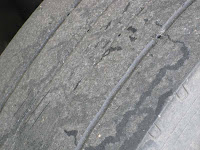 Quite clearly the bus had not been in a fit state for quite some time.

The bus company was never prosecuted. Directors merely changed its name.  The driver, who initially fled the scene, has been on trial but his sentence is not expected to be salutary in any way.

Felix’s mother, Rachel, as earlier reported, is now in Thailand, attending court, meeting local authorities and Embassy officials. A lawyer by profession she is not going to let the death of her son be just another statistic.

To this end she has also had a go at the Foreign and Commonwealth Office in the United Kingdom.
Below is her letter to a Foreign Office official.

1. FCO travel adviceOne of the issues I know you discussed at the December meeting was thetravel guidance given by the FCO and I understand Mr Browne MP agreed he would look again at this. In terms of the risks to travellers the advice ishighly skewed with more focus on political instability/terrorism than onthe dangers of the roads.

We have put together a ‘critique’ of the FCO’sguidance which we would ask be considered by the FCO when you are reviewing the guidance. I am sending this also to my MP Caroline Lucas and Chukka Umuna MP both of whom have taken up the issue with the Minister.

The need to update the official FCO advice on road travel in Thailandshould be in keeping with the conclusions of the responsible Thai and SEAsia tourist industry that long distance travel in Thailand is safer by airor train and that travel by coach, particularly unregulated coaches andtravel at night, is dangerous and is  heavily implicated in a number oftraffic accidents including those concerning of tourists.

The lack of significant FCO advice  could be construed as contributing to these.

2. Statistics of fatalities on the road

I understand that (name removed) has been in touch with you about the statistics being used by the Thai Police and the under-estimate of people the FCO report as being killed on the roads.

In the Channel 4 news report John Sparkes made before Christmas he used figures obtained from the Ministry of Public Health in Thailand which confirmed that 13,700 people were killed in 2010 and that the unofficial toll is nearer 22,000.

Surely even if the FCO must rely on data from the Thai government it is imperative that this data is clearly qualified in the FCO guidance – by confirming that it is an underestimate and unlike the international standard adopted by most countries (of a road death being one that occurs within 30 days of an accident) Thailand under records fatalities (by only recording deaths at the scene of the crash).

3. Issues being discussed by the British Ambassador in his meetingswith the Ministers in Bangkok.

We have been asking what issues are being raised diplomatically inThailand. Whilst it may be that our government cannot dictateThailand’s priorities we would like to know what issues are beingraised and to know that the British government’s representative isgiving sufficient weight to this important issue of road safety.

Meanwhile here is the mothers’groups official critique of the FCO’s travel advice for visitors to Thailand. 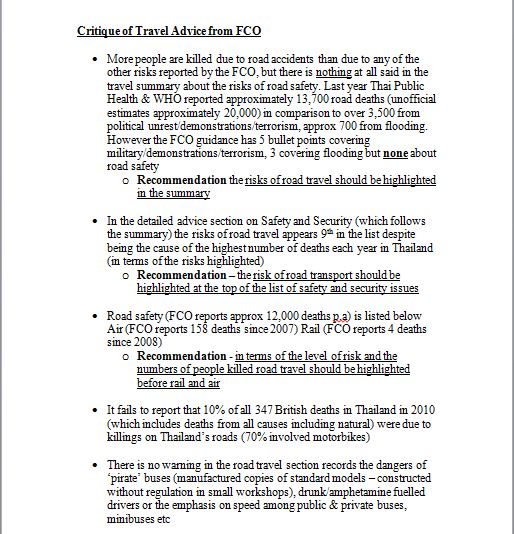 The FCO has since amended its travel advisory (not enough say the mums.) And of course British Coroner’s have no jurisdiction in Thailand and can only hope optimistically that someone is listening. 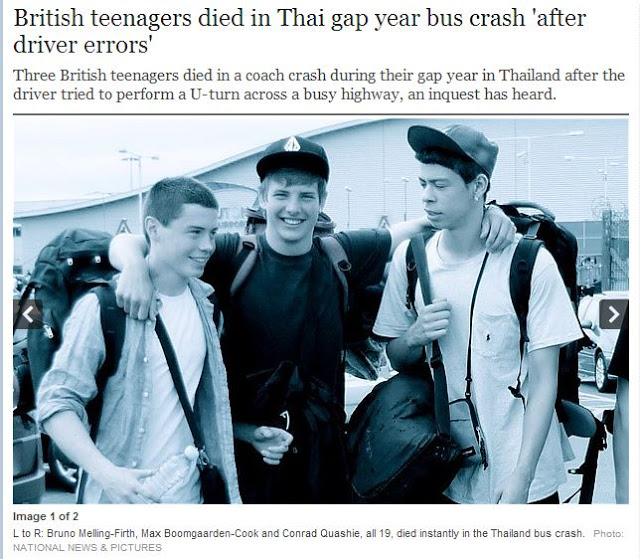 Looking at the death statistics for the Songkran period and bearing in mind all the warnings issued before hand, either the locals were not listening, or did not take it in. That is the local the mai pen arai quotient.
Here’s a short explanation of Rule 43 Inquests. 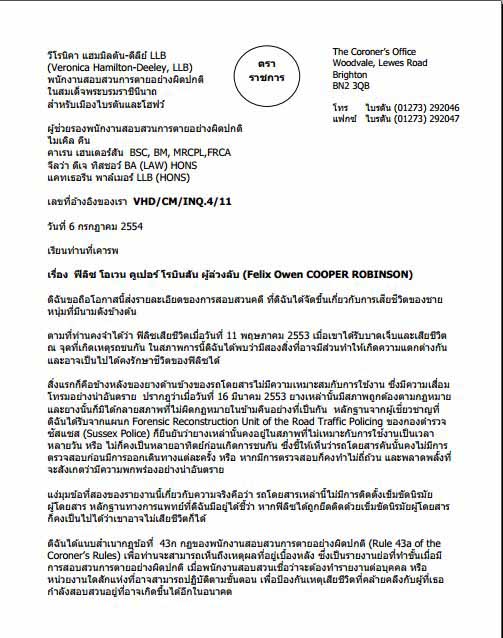 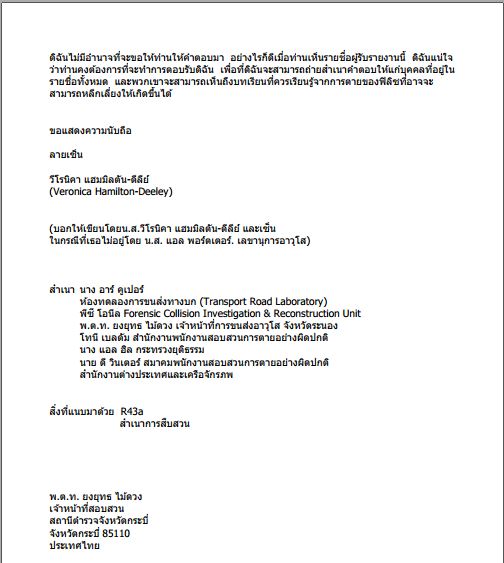 1) Regulations were being introduced now to make seat belts compulsory in all new buses, and from 2014 all existing buses would have 1 year in which to install seat belts.

3) DLT were introducing random vehicle inspections in addition to the current twice yearly inspections. He accepted that there were deficiencies in the current inspection system (eg buses could present with new tyres and then after a positive pass be changed for worn tyres)

4) there will be a requirement for the fitting of GPS systems into buses – so they can check remotely the speed of vehicles and how many hours  worked.

However, he also accepted that the main problem was policing and enforcement of current and future regulations.

British Foreign Office Minister Hugo Swire is also expected to raise the issue when he visits Thailand later this month.

Original story plus video at this link