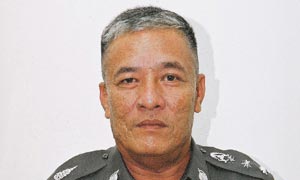 The Royal Thai Police today strongly denied claims made by American Drew Noyes in the Pattaya Times that they were seeking to arrest a British journalist and close down his website.

Reports of the hunt for Andrew Drummond, a foreign correspondent in Thailand for nearly 25 years, were wildly exaggerated, and his website www.andrew.local was not the subject of any enquiry.

A spokesman in the office of General Phonpat Chayaphan,(left) Head of the Central Investigation Bureau, said that quotes attributed to Police General Supisarn Pakdeenaruenart,  Commander of the Crime Suppression Division, in the Pattaya Times were not uttered by the General.
The spokesman added that quotes also attributed to unnamed cyber-crimes officers were also untrue.

‘We have spoken to the officers and department concerned and have been told that no such things were said.

‘Mr. Drummond can be assured we are making no attempts to close his site down.  Our enquiries show that a police officer in Pattaya wrote to the MICT asking them to close the site down. This is not the proper procedure.’

The Central Investigation Bureau, oversees both the CSD and CSD High Tech Division based in Chaeng Wattana.
The Pattaya Times newspaper, run by Drew Noyes, is currently running a story under the headline  ‘Cybercrimes Investigation of Andrew Drummond Begins With Backing Of Powerful Police General’.  It comes after another story saying strangely that police and private detectives are contacting the press world wide who are allegedly distancing themselves from this site.
Running next to the story was a picture of Drew Noyes posing with General Supisarn Pakdeenaruenart head of the CSD, whom, he claims has ordered the website closure and arrest.

The General is reported to be absolutely furious and has been in full discussion with Drew Noyes, ‘a prominent foreigner in Thailand’ apparently to discuss what action to take against people like Andrew Drummond.
However the picture is now just one more of Drew Noyes’ collectibles.
The article states: ‘The Supreme Commander of Thailand’s most powerful police division, the Crime Suppression Police, has ordered the Cyber Crimes Division and the Information and the Technology Commission (ITC) to assist the Royal Thai Police in Pattaya and Bangkok, saying, ‘This is a very prominent foreigner in Thailand that this website is lying about for no reason except to hurt his reputation so close it down and catch the people responsible.’

‘We will kick him out of Thailand and he cannot come back,’ declared one investigator of the cyber crimes division when he read only a portion of the statements the blogger had written about the ‘police and mafia controlling newspapers,’ the representation of Pattaya as only a place of decadents and attacks on good people that were obviously just to hurt their businesses and reputations.

Drew Noyes, has been the subject of newspaper exposÃƒÆ’Ã‚Â©s both in the United States before he arrived in Thailand, and of course also on this website.

The Wilmington Morning Star in Carolina Beach, NC., in 1995 exposed Noyes as a man of “myriad lies pursued by lawyers and unflattering allegations.’  The newspaper wrote that Noyes had been involved in bogus share dealing and fraudulent property dealing, and making up a phony resume.

On this site Noyes has been exposed for property fraud, falsely claiming to be a lawyer and broker, producing a newspaper by merely lifting stories of the net, and luring staff from the Philippines on false promises.

Andrew Drummond went to both the CIB and CSD High Tech Divisions after he read the reports in the Pattaya Times. He has presented information to both departments and lodged a report that a blogger had created a false Facebook page in his name which was disrespectful to the Royal Family.

Comment
Well no surprises here. Most people reading the stories in the Pattaya Times, incidentally somehow affiliated with the Bangkok Post, will have already come to the conclusion that they were utter tosh.
But the question is how did Drew Noyes managed to con so many people for such a long time?
The problem is I guess that nobody wanted any problem. When they were attacked by Noyes they never had any support except a few lucky ones who found Chris Hill.
Noyes almost certainly used pliable police for his own ends.
In my case he made a complaint to a Pattaya policeman saying that he had been libelled. But he did not say what the libels were. He just referred to articles on this site and on what dates they appeared. The Police Colonel then wrote a ridiculous letter to the MICT saying Pattaya was under attack.
The policeman broke a cardinal section of the Penal Code by aiding and abetting someone to destroy another person’s business (albeit in this case unpaid) and he clearly had not read what I had written.
Subsequently somebody at the MICT did contact my internet chappie. And last night Drew Noyes sent him a long sms demanding why he was not complying with MICT orders.  Then again coincidentally the MICT called my man asking for my address. I did however, get a name and number for the person at MICT and called him. The upshot of that conversation was that MICT are NOT investigating andrew.local, which is how it should be. I won’t go into details of the hilarious conversation.
But what has Noyes done to other foreigners? Well he hounded Chris Hill after he supported the foreigners who had been swindled by him in the National Housing Authority fraud.

Noyes merely abuses the country’s libel laws for his own benefit. Although his claims are spurious he counts on the fact that nobody will want to go through years of pain to prove their integrity. I will. I have done it and I will do it again if need be.
But then again of course Noyes clearly does not know the laws of libel as every story he has written contravenes them – and he is up in court again next month on a libel charge.
Picture Left: Drew Noyes and Keith Avery of the now defunct  ‘Optimists’ of Pattaya. Mr.Avery is reported to have been scammed see posts below. Noyes is reported to have brought down a few friends along with other victims.
Noyes and another editor Neils Colov of the Pattaya People have been enjoying an uneasy truce. But they both keep files on each other just in case. Their mantra is that they are there to protect the good image of Pattaya. But is that what they are really there for? Both have lawyers, both have or have had expat clubs.
If it walks like a duck, quacks like a duck….
A lot of people in Pattaya need waking up. Perhaps its time for the ‘good guys’ to show themselves and take the reins.  Hope springs eternal.

Whoah. He’s at it again. Drew Noyes has now re-edited the last story to say that Thai police and investigators are calling all my newspapers etc and now says I am being investigated by…………Eric,  the East London builder (below right), who is as mad as a wet hen, from ‘Teakdoor.com’.
Noyes, claims that I live in a rented house, am an alcoholic, and that that a ‘former friend’ of mine says I snapped in 1983. Not many people knew me in Thailand in 1983. Must have been a good snap because in 1987 I was founder of the Observer Film Company having been a foreign correspondent for that newspaper. Anyway he claims my police general has been duped, which I am sure he will be glad to hear.
He also claims I have had to pay undisclosed sums for lying about boiler rooms (gosh! he even makes the boiler room guys look good) that I have been jailed, that the Bangkok Post have had to make out of court settlements on a story I wrote (yes that one has me especially bafflled) and that I am going off the deep end into a waterless pool.
Here are a couple of samples of Dirty Dog’s work by the way. You have probably guessed this is another imaginary investigation. But an investigation by ‘Dirty Dog’ is novel.

Above: ‘Andrew Drummond, learn to suck **** before you speak to me. How safe are your parents drummond?’
And below:
‘PPS: It us really irrelevant to me which part of his family gets hurt or injured. I really don’t care’
Sometimes I wonder if Thailand is attracting the right sort of Brit.

And below, he does not seem to be integrating too well.