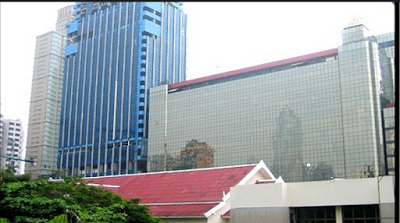 BUT ARMY LINKS TO INTERNATIONAL CRIME STAY STRONG
The Thai Military Government, which claims it is waging war
on corruption in the country, appears to have created a smokescreen to cover
its own illegal and definitely corrupt activities, while cementing its established
links with foreign criminals and creating new ones.
Journalists capable of exposing these links have found
themselves having their accreditation withdrawn, and others including myself
and former Reuters man Andrew MacGregor Marshall,  a fierce critic of Thai military corruption and author of ‘Kingdom in Crisis’,
have been forced to relocate completely.
Over the last 24 hours the Foreign Correspondents Club of
Thailand has circulated its members to see actually how many are having
problems with accreditation, having spent the last few months appealing on
behalf of members.

The accreditation of a well known Brit-Australian photo-journalist has been restored after protest.

Relations between the FCCT and the Ministry of Foreign
Affairs Press Department are at an all-time low. They appear not to speak at
all.
The FCCT has further been banned from holding a discussion
at it’s club in the Maneeya Center this week on  Lèse-Majesté (insulting the Royal institution)
– The club was warned that if it intended to go ahead the whole of the Maneeya
Centre in Bangkok would be sealed off.
To prevent inconvenience to other tenants it had no choice
but to cancel the event. As reported on this site it had already been forced to
cancel the leasing of the premises to Thai Lawyers for Human Rights who wanted to
present their report on what freedoms the military government had taken away so
far, and its illegal detentions and torture under arrest, and of course the eviction of ordinary people from forestry land in favour of developers.
The authorities are reluctant to leave a paper trail for
the kind of orders issued to the FCCT.
The FCCT reported:

“We received a letter last week from the police asking for
our cooperation in cancelling the event, stating that the 112 event would sow
disunity in Thai society, and encourage people to break the law and stir up
unrest. We told them these fears were groundless, and declined their request.

“The police informed us there were no regulations
prohibiting us from proceeding. So we asked for a written order from the NCPO
before we could justify cancelling the event. The NCPO has now told us they
will not issue such a letter because they fear it would be used in the media to
damage their image.”

But army officers have been caught on this site trying to do
under the table financial deals for instance to clean up the water in Bangkok.
More and more media
organisations are being forced to report from outside Thailand what happens
inside and with new technology this is becoming easier and easier.

Journalists are also being pursued under Thailand’s
Criminal and Computer Crime libel laws. And that means that if any complaint is accepted against a foreign journalist he/she would become subject to an order of the
court meaning he/she could not leave the country without permission – And the court
order could last for years.  That’s enough to stop any journalist writing anything.
Foreign correspondents do not have time to apply for leave
of the court to travel on a news story, hence they are put out of work.

(For the
last couple of years in Thailand my patch for instance which has stretched from
Turkmenistan in the west to Australia and the South Pacific in the south east, had
been restricted to Thailand, and even last week I had to decline a trip to
Mount Kinabalu in Sabah, requested by a desk which did not realise I had left Asia.


All the cases against me were brought by people convicted of serious criminal offences and sentenced to jail time with the exception of one which was brought by a former Australian pimp now on charges racketeering charges brought by the Department of Special Investigations. Three of the four plaintiffs were foreigners. The fourth was the wife of the first plaintiff.)

The most obvious case of media harassment is ‘Phuketwan’ and
journalists Alan Morison and Chutima Sidasatian, who have been charged with
criminally libeling the Royal Thai Navy in its role in the trafficking of
Rohingyas, by publishing a paragraph of a Reuters report.
The world stands aghast at the Thai military’s stance in
the light of video evidence presented by the Navy itself of Andaman Sea push
backs as this couple were at the forefront of exposing the plight of the Rohingya,  and of course in the light of the recent arrest of an influential army general, who it is alleged cashed in on the Rohingya plight and was a principal trafficker.

The European Union has issued a statement mentioning my case and that of the Phuketwan pair as well as British workers’ rights activist Andy Hall saying:


“Recent cases brought against Human Rights Defender Andy Hall, journalists Alan Morison and Chutima Sidasathian from the”Phuketwan” newspaper, and the freelance journalist Andrew Drummond have served to demonstrate how criminal defamation laws are vexatiously used to silence freedom of expression and investigative journalism in the country.”

The FCCT called for an investigation of vexatious prosecutions.

Neither statement has however rocked either the military or in my case the convicted criminals and fraudsters pursuing me.

(Under the current system a guilty verdict is expected in the case of Alan and Chutima with perhaps a
light sentence to show the country’s ‘mercy’ but also save face – something it needs to do to in
the light of the brutal murders of the Rohingyas in Thailand. The case has little to do with justice).
Among the increasing number of sites blocked in Thailand by
the Thai military since the EU statement is this one.

The FCCT has repeatedly asked over several
months why and who indeed is the major complainant. The Ministry of Foreign
Affairs has not had a reply from the Ministry of Communications, says the FCCT.

The President of the FCCT is Jonathan Head, South East Asia
Correspondent of the BBC. He has other important work to do.

As many thousand readers are accessing the site through VPN’s
and loopholes left open by the Technical Criminal Investigations Department,
who were ordered to carry out the block, this is having a minimal impact, but it
hinders casual viewers from inside Thailand. 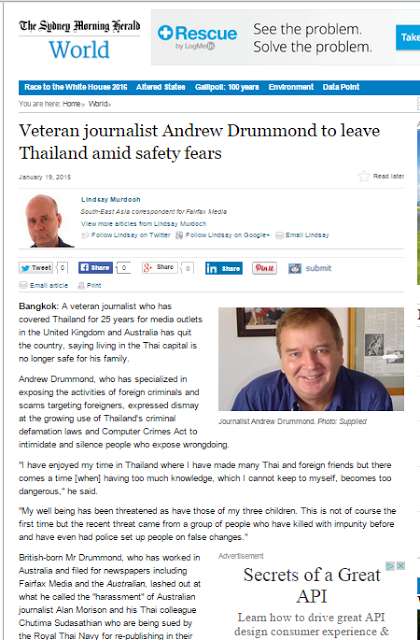 I left Thailand with my three children, now aged 7,5 and 3,
in January. I had ignored physical threats from ‘boiler room fraudsters’,
declined a request to buy out this site with a promise of a very comfortable
life elsewhere, but finally decided to leave,  after a message which gave me the
last chance to take a ‘get out of jail free card’.
The ‘boiler room’ or ‘Wolf of Wall Street’ scammers have
been working with both Thai Police and the military, and had a history not only of murder
but also getting police to set up ‘whistle blowers’ and their own ‘squealers’ on
false charges, not only in Thailand but the Philippines.
Should that happen to me I was not confident of putting any
faith in the British Embassy and its ‘We cannot interfere in the judicial
affairs of other countries’ policy.’
Moreover last year representatives of the Swedish based Confederation
of Defrauded Victims (CDV) sent representatives to meet with the Thai military
in the form of a 3 star general in a restaurant on the outskirts of Bangkok in
the hope of cracking a deal. They asked what it would need for the military to
cease offering protection.
The answer was: ‘Make us a better offer!’
Bangkok’s boiler room kings have long since been money
laundering their cash into the Thai tourist sex industry and the prime British
boss runs the master-lease on the Nana Entertainment Plaza and of course in the
Eclipse group running theme bar restaurants and pubs throughout the city’s
central district.
When the military took over in May 2014 the advertisements
on ‘Craigslist’ for ‘tele-sales’ operated rocketed but under pressure from the
CDV boiler room bosses removed all traces of their directorships, or at least
believed they had, because that is what they said at a meeting of a group of
them two months ago.  It is unlikely that
any of their 119 companies set up in nominees would survive close scrutiny by
professional investigators.
What also appears to have happened is that crime bosses in strongholds
of the Democratic Party in Southern Thailand have also been allowed a free
reign under the current military government with widespread reports of massive
swindles on foreigners who had come to Thailand to buy properties on the Thai
islands of Koh Samui, and Phuket – the most popular destinations for British
tourists.
These simple scams which merely involve getting the hold of
land deeds (chanotes) and forging signatures have been carried out with the
connivance of local courts, and major Thai banks.
This was highlighted last month when the Royal Thai Police
were forced to intervene in the case of Jessie Vard, a 16-year-old Irish girl,
whose father Colin Vard, 63, was robbed of seven houses on Phuket.
Thai Police only acted because Jessie went on
the internet in Thai and got the interest of all the major local television
stations and popular newspapers.

Even
the Bangkok Post, which does not as a rule publish negative stories about
foreign victims in Thailand, also carried the story at a later date.

But the Vard case is only the tip of a massive iceberg of
property fraud in Phuket, Pattaya , Koh Samui and Hua Hin. It is unlikely
however that the major funds will be refunded, or that serious heads such as bank
presidents, judges, or senior police, will roll.

The military Prime Minister General Prayuth Chan-ocha is good at grandstanding and excellent at media promotion because little bad can be said about him.

But his moves against corruption which have been warmly welcomed by perhaps the majority of the people have in the main been against his enemies with the exception of the army officer charged with trafficking Rohingyas – General Lieutenant General Manas Kongpaen.

Last year’s take down of General Pongpat Chayapan, head of the country’s Central Investigation Bureau, and about 80 per cent of the officers of Thailand’s Crime Suppression Divison was not prompted by police but the Crown Prince who had allowed his ex-wife to insert friends and her family into the units who were making billions out of corrupt rake-offs.

The National Council for Peace and Order stepped in and promised ‘transparency’ in the case of Jack Hansen-Bartel who was severely beaten at a police controlled club in Samui and then charged with an misdemeanour offence by Samui police following the arrival on the island of the millionaire father of one of his Chinese American assailant, but after posing for pictures the military men could not be seen for the dust and have not surfaced since.
Foreign criminals are also involved in some
of these scams, particularly those running law offices and property development
companies (neither of which they are technically allowed to do in Thailand). 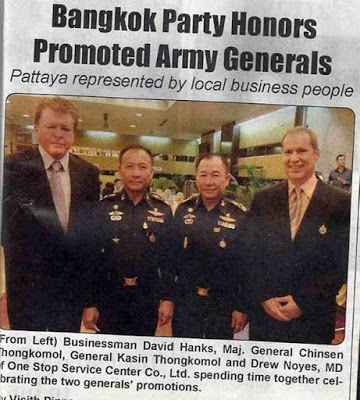 These are not directly army connected but indicative of
where the army’s loyalties are. They had also closed their ears to complaints. Similarly
the army has given up on the idea of instigating reforms of the corrupt Thai
police.
One such scammer is of course American Drew Noyes, who
arrived in Thailand some 17 years ago, with a history in the United States of
property and share fraud and convictions for burglary and larceny and even
sexual harassment. But he claims and does have assistance from the military –
and makes the most of it.
IN PART II:
Noyes, the Royal Photographer – ‘100
rapes’ – and those wedding pictures