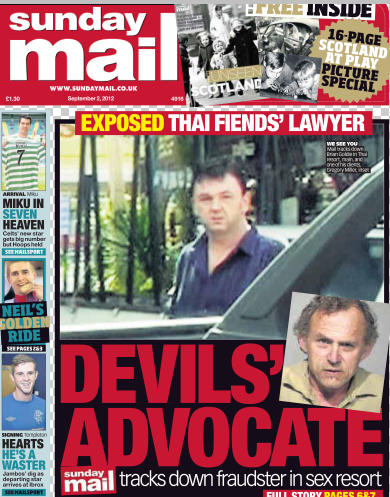 A Thai court today ordered the arrest of a Scotsman posing
as a lawyer in Thailand who allegedly cheated an American woman out of over £180,000
for his fake services.

The order was made after Brian Goudie, 47, from Falkirk,
failed to turn up at the Provincial Court in Pattaya, to submit himself for
trial and pay bail.
Goudie, who also allegedly claimed he was a former officer
in the Royal Marines, who had been injured in action, was charged with cheating
an American woman, Barbara Fannelli Miller, aged 75, from Madison, Wisconsin,
out of the cash claiming he would get her son Gregory Miller, 46, discharged
from child sexual abuse offences.
In the evidence is a videotape on which he is heard saying:
‘Perverts. I am making so much money (from them)  It’s like there is no tomorrow.”
Pattaya is a destination of choice for a number of gay
paedophiles.  Mrs Miller’s son Gregory
Miller had obtained a job teaching at an international school near Pattaya when
a court heard he paid for sex with underaged boys.
Goudie set up a law office called Alba Laws with a Thai
girlfriend Sukanya Worakam,30, a former girlfriend. An arrest warrant has also
been issued for her.
Under the name he was born with Brian Goldie, he was jailed for
six years in 2000 for stealing over AUS$400,000 from his employers a West
Australia mining company at Perth District Court. 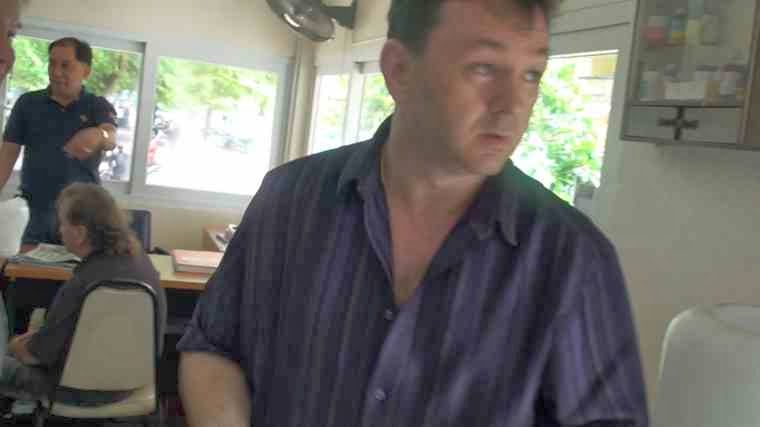 Deputy Judge S.A. Forgie of the Australian Appeals Tribunal
to whom he had appealed to stay in Australia, rejected his appeal describing
him as ‘not a person of honest character’.
Goudie also has to surrender to the Pattaya Court on
February 18th to face more charges of taking pecuniary advantage
claiming he was a barrister with a law degree from Edinburgh University, who
frequently had to return to the UK to defend clients not only at the High Court
in Edinburgh but also at the High Court in London and the Old Bailey, and that
he was a Captain in the Royal Marines who had served and been injured in Iraq.
A statement from Edinburgh University said no such person
had acquired a law degree there.
THE SCOTSMAN – Thais order arrest of ‘fake’ Scottish lawyer