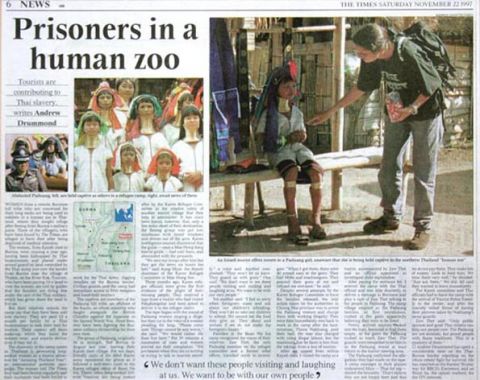 Together with Sudarat Sereewat, the General Secretary of Thailand’s ‘Fight Against Child Exploitation Foundation’ Andrew Drummond investigated the plight of a group of Padaung, the long necked Burmese, part of the Karenni minority, who were tricked by Thai businessmen and made to perform in a ‘human zoo’ in Thaton, North Thailand.

The Padaung had smuggled out audio tapes via tourists to the Karenni Refugee Committee. In the tapes they sung laments and begged for help.
After listening to the tapes and having them translated Drummond investigated the story for ‘The Times’ and also filmed for Channel 4 News, U.K.
During the investigation the crew found that in the early stages not only were they up against the local ‘businessmen’ but the police and district officials too.
The owner of the camp was an ‘influential figure’ in northern Thailand.
As a result of the investigation in ‘The Times’ and with the support of M.P. Ladawan Wongsriwong the Thai government closed down the camp in Thaton and the 32 Paduang, 21 of them children were transferred to a refugee camp in Mae Hong Song.
The then Governor of Tourist Authority of Thailand condemned the ‘actions of unscrupulous businessmen.’

(above)Hands up who wants to leave this place!
Today the plight of the long-necked Padaung in refugee camps inThailand is far from perfect. It will never be until their homelands in Burma are safe.
But they are considerably happier. The children at last can go to school and the community is often consulted by the local government. They have more say in their future.
Andrew Drummond gave evidence in the local trial of the two businessmen.
When he revisited the rescued Padaung shortly before New Year in 2006 Andrew Drummond was showered with enough presents by them to open up a shop. A baby named after Ladawan Wongsiwong, was now at school.
Sadly the Padaung  cannot go home. Human long-necked zoos have multiplied and are a major attraction for tour groups in Chiang Mai.  The Tourist Authority has forgotten the words of its former Governor. Chiang Mai province is giving the operators licences and the long necked woman work permits.

‘Pen pon praiyote’ – ‘It’s for the benefit of all,’ says one of the operators.’

But those who really benefit are the businessmen. They argue the new

camps are better organised and the inmates share the benefits.

However life for the Padaung could be a lot worse in Burma. If you chose to

visit a camp please give any other monies direct to the Padaung.

Andrew Drummond with rescued Padaung girls (left) (above) Sudarat Sereewat unflappable fighter for children’s rights with Padaung woman.
‘Prisoners in a Human Zoo’ Producer/Director Andrew Drummond/ Presented by Andy Chant – Channel 4 UK
*’Human Zoos’ are guarded villages where the occupants are required to dress up in their national/tribal costume and perform such cultural acts of weaving, or playing a musical instument, or pounding rice for the entertainment of tourists.

These people have generally have no rights in

Thailand to travel beyond the village where they are

placed. They are no schools available to them,

except in the refugee camp in Mae Hong Son. Thai

law states they should be given education.

In the cases where Padaung have escaped they are

usually rounded up by the local police and returned.

The camp operators do not care about the male

Padaung. As they do not have ‘long necks’ they do

not bring in the tourist dollar.

Monthly payments to the Padaung are variable and

depend on the number of tourists paying entrance