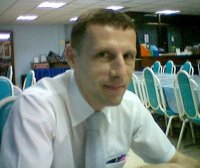 A Briton last night became the first man to be deported from Thailand in a major sweep of paedophiles from the country.
Gary Robcoy, 30, a convicted child abuser in Britain, was put aboard a
London bound British Airways flight at Bangkok’s Suvarnabhumi airport
after being told he was blacklisted from the country.
Computer science teacher

Robcoy, from Wapping E.London,  who was arrested at the Potisarn
Pittayakorn school in Tailing Chan Bangkok, where he was employed as a
computer science and English teacher, had not been found guilty of any
offences in Thailand. He was deported purely on his British record of
child sex abuse.
The Thai government says it will now deport all foreigners discovered to have committed sexual offences against children.
A  spokesman for the Royal Thai Police Immigration department:’ This is a
new initiative. Thailand should not put its children at risk by
allowing these people to stay in Thailand ‘.
The Immigration Department has set up an office to liaise with
representatives of foreign police forces based at Embassies in Bangkok.
In Bangkok a member of the Serious Organised Crime Agency has been
liaising with Thailand’s Immigration Department, who say, proof of
conviction of offences against young children in the subject’s home
country will be enough to warrant immediate detention and deportation.
The new deal follows a controversial year in Thailand for officers of
CEOP, the Child Exploitation and Online Protection Unit, which is part
of SOCA.

After ‘Operation Naga’ in Pattaya last year
when two British suspected paedophiles were arrested CEOP’s boss Jim
Gamble described the joint Thai-British effort as a triumph of
international police co-operation.
CEOP has also been provided lecture courses to Thai police on how to deal with child sexual abusers.
But in fact all the Britons arrested during
‘Operation Naga’ were released on bail and two have already fled the
country. The Embassies of several European countries have been in
dailogue with Thailand’s Ministry of Justice and a memorandum has been
sent to criminal courts throughout Thailand.
‘All Britons charged with child abuse got bail’
A British Embassy spokesman also said in a statement:
‘Between 2004-09, 24 Brits were arrested in Thailand on child sex offences and all were granted bail.
‘Exploitation of children is, of course, an issue
which the Embassy and the UK government takes very seriously.  We and
our European partners support the Thais’ efforts in dealing with the
problem and have been encouraging them to make their bail provisions for
these offences more robust’.
Thai Police, particularly in the sun and
sex resort of Pattaya, have been accused of creating a cottage industry
out of the high payments they can get from paedophiles for their
release.
Sudarat Sereewat, Secretary General of  the foundation ‘Fight Against Child Exploitation’ welcomed the new breakthrough.
‘We have asked the British authorities in the past to stop their
paedophiles coming here.  They keep coming, but now we can send them
back. It’s very good news.’
__________________________________
REPORTING CHILD SEXUAL ABUSE
If you know about child sexual abuse in
Thailand involving foreigners, or suspect you know someone who has been
convicted of offences in his own country, probably the least
pragmatic thing to do is to report it to your local policeman, unless
you know him, you speak Thai, he is in your debt, and carries the rank
of Senior Sergeant upwards. Only at a political level is child sexual
abuse treated seriously. At police station level it generally comes down
to a payment of money to the victim’s family, and a service fee.
You can (1) report the matter to the local
Police Liaison Officer at the Embassy of the national concerned, or even
at your Embassy if it is different. Call the Embassy and get his/her
email. You will not normally be given a mobile phone number,  but a
clear email will draw a response, although he may well be pissed off if
he is about to close in on a major international Thai based crime
syndicate. You should specifically ask for the Law Enforcement or Police
representative, because the Consular section may be called upon to
offer advice to the citizen involved.
In the case of ongoing abuse you can also
report the matter to ‘Fight Against Child Exploitation’ who can liaise
between people with whom they work closely within the Royal Thai Police
to initiate an investigation. They also monitor cases through the courts
and look out for shady deals. Ask for Sudarat.
(66-2) 509 5792
(66-2) 519 2794
email: facesudabkk@yahoo.com
You can also contact CEOP, the Child
Exploitation and Online Protection Centre online. They have officers in
Thailand seemingly almost all year round now but in any case they insist
they will deal in any country with any police.  They seem to be best in
tracking online perverts. Despite their international links their
website does not appear to have a specific place to complain about
offences abroad, so just log in under one of the UK areas and tell ’em.
http://www.ceop.police.uk/reportabuse/
And, if the worst comes to the worst, don’t
go out and borrow a .38. You can always contact me here because I have
direct lines into most, and I do not have to wait for clearances from
bosses.