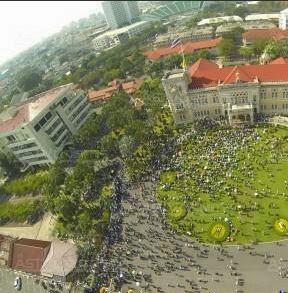 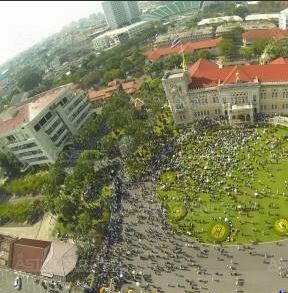 Anti-government protesters were treated to guided tours of the Metropolitan Police Headquarters in Bangkok today after they disarmed themselves and police put down their tear gas guns and water cannons.

One of the protest leaders Thavorn Senniam announced the invasion as a triumph. But police overnight had announced they would declare an ‘open house’ today.
They asked the demonstrators to try not to do any damage. The decision led to a temporary end to hostilities.
Last night police were firing gas and rubber bullets at the protestors who had commandeered a mechanical back hoe which was digging away at the police walls. Today they were happily chatting among each other in the police station grounds.
But the lull is not likely to last.  Protest leader Suthep Thaugsuban, former Deputy Leader of Thailand’s Democratic Party said today he had packed his bags and permanently left the party and its offices.
He described the occupation of the Metropolitan Police HQ as a victory. “They have run out of tear gas. We did it with our bare hands. But it is only a partial victory. The fight must go on. We can’t go home now.The government will probably dissolve itself in a couple of days and paint us as the trouble makers.
“But the fight must go on”.

Anti-Government protesters are calling for an end to the Shinawatra regime.  They accuse the government of trying to railroad an Amnesty Bill which would allow Prime Minister Yingluck Shinawatra’s elder brother Thaksin Shinawatra to return to Thailand.
They claim Thailand’s recently democratically elected governments run by the Shinawatra’s  became corrupt  dictatorships when they came to power.
Many protesters are expected to stay on for the King’s Birthday Celebrations. After that – who knows?
So far no-one has won. The protesters failed to achieve the fall of government -but they have messaged the world that something is rotten in the state of Thailand.