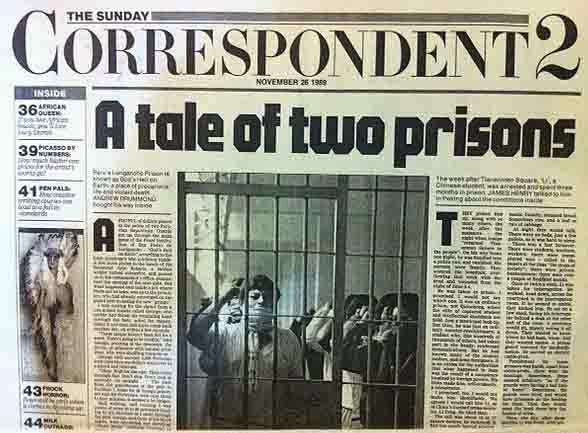 DON’T DO DRUGS BECAUSE, ER….


Prisoners Abroad and the British Foreign and Commonwealth Office have got together to produce a video warning people not to get involved in drugs abroad.


The video is rather understated. It is called ‘Don’t Do Drugs. It’s Not Worth It.’ Yes. I thought that would wake you up.


They could have added don’t do drugs in Asia or you will not only face death by hanging or injection but will also have the crap beaten out of you on a daily basis after which, if you have a life threatening injury you might be prescribed an aspirin the same medicine prescribed you for TB or AIDs if you have picked them up along the way.


Unfortunately the film is as exciting as its title. It just comprises talking heads and extended captions and does not convey the absolute misery of being imprisoned in South East Asia – although Peru is not good which is mentioned in the video along with jails in the US.

Apart from jails in Thailand, Singapore, Malaysia, and Cambodia I have visited jails in Texas and North Carolina and Peru.

The San Pedro di Lurigancho jail just outside Lima and was particularly unpleasant.

My report on that prison was for the short lived Sunday Correspondent, which was born out of the Wapping strike against Murdoch.

It seemed in the main to be run by prisoners with the guards opening the gates to allow the food in.

Once inside I had to hold on to a token which was the only thing which differentiated me from the prisoners. To get to the British prisoner I wanted to see I had to hire my own squad or prisoners to get me through the demonios  ‘mad men’s or demons’ compound and fight them off at the same time.

It is of course an extreme irritant to the FCO and Consular services to have to go and visit prisoners in far flung jails so to get round it they enlist local volunteers. Many prison visitors both staff and volunteers have been very good, though it does not stop the complaints coming in.

Prisoners Abroad, which I knew very well in the late eighties when I was based in London and flying out on assignments to places like Peru and Turkey (below), provides an allowance for prisoners which takes an edge off the misery.

Times have changed of course. Whereas in the past I visited prisoners to help them and in the case of Danny de Souza, (pictured above) whom I met out of Izmir prison in Turkey, to take him back to the UK. today, in Thailand its the criminals who continuously try to put ME in jail.
Danny was great fun I much prefer his type of criminal than some of the sleazebags I have had to deal with in Thailand.
Link: Prisoners Abroad
Foreign Prisoners Support Service another good organisation led by amongst others Kay Danes who spent a miserable time in jail in Vientiane, Laos.
Here’s the video.