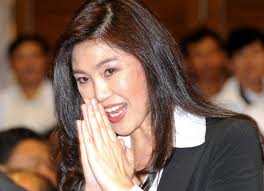 Oh dear. Thaksin Shinawatra’s easy on the eye younger sister Yingluck – a Prime Minister in waiting if you believe the polls – seems to be offering clients of her/Thaksin’s property company SC Assets – a terninal solution to their problems.
Well we all have a rough idea how many innocent people were ‘injudicially killed’ during her brother’s ‘War on Drugs’, could there be a hidden reference from Pheu Thai’s* ‘honey trap’ for the middle-aged.
Well ‘completed living’ I daresay is just another advertising gaff and not what Thaksin has in store for the likes of me when/if he returns later in the year. We can read these sort of things every day in the English language press and on billboards throughout the country, which is why I refer to Pheu Thai* and not Pheua Thai because the Bangkok Post swears by the former.
I have often thought people are actually scared to tell these advertising moguls that they can’t speak English: The King’s Birthday suit and all that.

I’ve stopped reading politics this week. Its just too depressing. But as there is not much else in the papers I found myself reading the back of my daughters box of ‘Coco Pops”
I gave up on reading politics after being seized upon by depression when I saw all those familiar names which never ever seem to go away. You know, Banharn, Newin, Chalerm, Sanan, Chavalit.  Pass the sick back Alice. Plus Ca change.
Just happened to be visiting a friend on a nearby estate when the SC Asset band rolled in offering free, noodles, satay, coconut ice cream and give-aways including the carrier bag (left) and beads and buttons, yes beads and buttons. I grunted and took mine.. I had to pinch myself to make sure that I was not at an electioneering meeting.