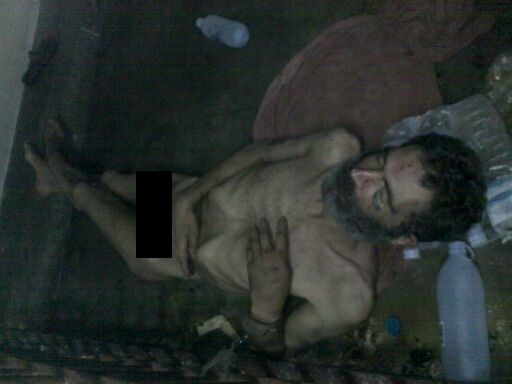 Five months after he was found wasting away chained to cell bars in Pattaya police station Briton Richard Hewitt has still not been allowed home, because of legal complications which have delayed a simple case of overstaying his visa.
Hewitt, 48, from Brownhills, Birmingham, now revealed in his youth as being a guitarist and singer with the British punk group ‘Isobel Barnett and the Shoplifters’, was rescued from the cells of Pattaya Police station last November, after pleas to the British Consular department were ignored, and expat Tracey Cosgrove, of the Melissa Cosgrove Children’s Foundation read about his plight on this site.

Hewitt who was naked, incoherent and in a filthy state, was washed, fed, and taken to a psychiatric hospital in Bangkok for treatment, and when he was finally released, it emerged he was wealthy in his own right, a graduate of Sheffield University in England and a qualified computer engineer. He paid all his own hospital and legal costs.
Hewitt had fallen victim to pretty much all the vices Pattaya had to offer but since his release , he says, now back in Pattaya he has been living a quiet life.
The Office of the Attorney General has so far not been able to complete a case against him (he overstayed his visa for about a month while suffering a nervous breakdown) and he has been told it could months before the court is ready to deal with it.
‘I just want to go home and see my mum who is elderly,’ said Hewitt. ‘I’m ready. I have picked up the two guitars my landlord was holding for me, but it could be at least June before I can go.

‘I have money so it’s not so bad. But what would happen in such a case where the person has no money to live off and how would the Embassy deal with it. It does not bear thinking about.’
Footnote: For younger readers: Lady Isobel Barnett was for ten years a panellist on the BBC television programme ‘What’s My Line?’ and later made many appearance on the BBC radio programme ‘Any Questions?’ She gave an aura of being the classic English aristocratic lady,  but committed suicide in her bath in 1980 four days after being convicted of stealing a can of tuna and carton of milk at a magistrate’s court.
Punk rockers were, of course, no respecters of the establishment.