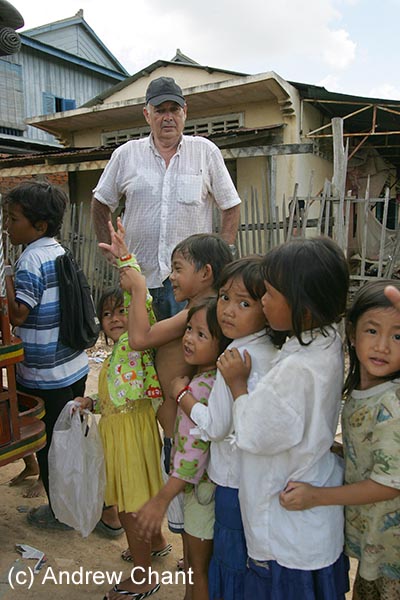 From ANDREW DRUMMOND, Bangkok
May 12 2011
A convicted British child sexual abuser who ran a children’s charity on a rubbish dump in Cambodia has been sentenced in his absence to ten years in jail for rape.
David Fletcher, 57, from Norwich, was absent from the hearing in Phnom Penh because he fled Cambodia to Thailand, when police were his trail.
He had been exposed in a story in the Sunday Mirror and andrew.local
A court in Thailand has ordered his extradition, but Fletcher, from Norwich, is appealing the order and is currently being held in jail in Bangkok.

Fletcher was sentenced to ten years in jail and also fined US$5000 for the rape of a 17-yr-old girl who lived with her family on Stung Meanchey rubbish dump in Phnom Penh. It is the same girl he was negotiating to buy from her mother for US$150.
Presiding judge at Phnom Penh Municipal Court, Ker Sakhorn, said even though he was not present to defend himself he was guilty of a rape committed in Phnom Penh in 2009.
Ker Sakhorn said he hoped the Thai authorities would return Fletcher soon.
Fletcher, who ran hair dressing salons in Saffron Walden and Cambridge, was convicted at Norwich Crown Court in July 1997 of the statutory rape of a 15-year-old girl who he had plied with champagne and offered Ãƒâ€šÃ‚Â£250 for sex.

Charges against a second woman were not proceeded with at the time, but the woman has since contacted police in the U.K. anxious to bring Fletcher to justice.
He also admitted possessing offensive weapons and was jailed for 18 months.
After serving his time he moved to Cambodia and set up a ‘girly’ bar in Phnom Penh called the ‘Bogie and Bacall’.
While there, he also set up a so called charity called ‘Children of the Dump’ and charged tourists cash for tours of the dump to feed the children.  Ostensibly all the cash was to feed the children, but for over a year, after closing his bar his so called charity appeared to be his only means of support.
His activities were initially exposed in a Sunday newspaper but Fletcher was finally arrested in a joint operation between Britain’s CEOP, APLE (Action Pour Les Enfants) a children’s charity and the Royal Thai Police.
A source at the British Embassy in Bangkok confirmed that Fletcher was appealing extradition and the process could take some months. He is being held in Bangkok Special.
Comment: An unusual case. The girl was 17 years old and some sort of pact, while abhorent, had been entered into with the girl’s mother, whom I met. I am informed it is the same girl. He had allegedly given her an engagement ring but asked for it back while on the run. So the evidence suggests the girl must have gone into court to say she was raped. I have spoken to a second victim of Fletcher in the U.K., whom he was not charged in relation to (much to her regret) because he did a plea bargain.  Many years on this woman was still suffering. So, while this seems to be rough justice I cannot feel much sympathy. By proceeding with this case, knowing that an order had been made by a Thai court to extradite him, might I suspect might in other circumstances by a Human Rights case. It looks like his defence was irrelevant.
Some people should take heed.
Other links

Fletcher to be deported

‘Can I have my ring back?’ asks fleeing child abuser?