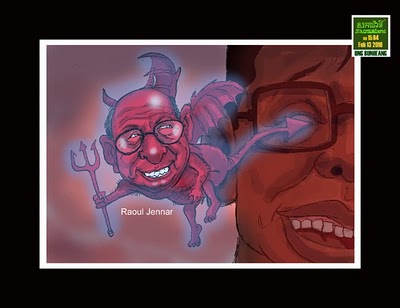 The current conflict between Cambodia and Thailand is doing nothing for Thailand, northing for Cambodia, and nothing for ASEAN
While this issue has been on the cards for many years it appeared to have resolved itself  for a while and Thais could apparently live in harmony with their neighbours, while the issue rumbled on inconsequentially in the background.

It only became a political issue when the late PM Thaksin Shinawatra ,who had extensive business interests in Cambodia appeared to be favouring Hun Sen on the Preah Vihear temple issue, and that inevitably involved protest from yellow shirted PAD supporters. The current government of course is anti-Thaksin in all respects and has to a certain extent followed the PAD line, while distancing itself slightly from elements of this movement.
Still people in the west might find it hard to fathom why two Buddhist nations are killing each other’s soldiers and civilians in quite futile artillery barrages across this border.  Many Thais along the border in the provinces of Surin and Buri Ram, Sakeo, Aranyaprathet speak Khmer.
The main temple in question are Khmer in origin is quite clear but of course Preah Vihear sits on a raised plateau which geographically seems very much to be part of Thailand and how many times have Thailand’s border with Cambodia changed?
Yesterday Thailand’s Prime Minister did quite a good PR job for Thailand by being able to speak coherently in English on the BBC and elsewhere and saying that there was nothing he wanted more than lasting peace.
Of course the Cambodian’s believes he speaks with a forked tongue, and of course there are elements at home he does not want to upset. Likewise I myself have difficulty believing Hun Sen is a man of the people considering the masses he had driven from their homes for building and other projects for his cronies.

At any rate there is nothing Buddhist about the fighting going on.
I raise this issue today because I and many others got an email from Raoul Jennar, a Belgian professor and authority on Cambodia in which he presented a robust, rather too robust perhaps, explanation of the Cambodian point of view.
Raoul has been around for a long time. He was in Cambodia when I was there covering the UNTAC elections in the early nineties, and when King Sihanouk returned.
For journalists he was the man to go for a reasoned quote. So I am confused as to why, as an academic, he has taken on an advisory role to the Cambodian government.  He has as a result been described on at least one website as Hun Sen’s lackey.
(On a lighter note I have to say he does make several points about maps produced in Thailand. If the maps are anything like the ones I have bought here over the years then I can sort of understand his frustration)
So who is right? And should we care?
This is what Raoul Jennar has to say:

1. Why Cambodia does not trust the Thai side ?  Thailand doesn’t respect her own signature :

a) in 1946, Thailand signed with France an agreement reestablishing, after World War II, previous conventions and treaties (1920, 1925 and 1937). All of these instruments stipulate that the two countries confirmed the established border line according to the maps that have been adopted by both government as the settlement of the 1904 convention and the 1907 treaty. It was written by a Conciliatory Franco-Siam Commission that there was no need to change the provisions of the 1907 treaty about the border. But three years later, in 1949, Thai officials were occupying the Preah Vihear temple.
When, today, Thailand is stating that “the border has never been demarcated”, it is denying her own signature on the minutes of the Commissions of Delimitation and on the 1920 revision.
b) in 1991, at the time of the signing of the Paris Peace Agreements on Cambodia, Thailand was among the signatories parties that pledged to protect the sovereignty and the territorial integrity of Cambodia.
But during the UN operation that followed this Agreement, it was seen by UN observers that the Thai armed forces moved border stones inside Cambodian territory (UNTAC Border units final report, September 1993).
c) in 2000, on 14 June, Thailand and Cambodia signed a Memorandum of Understanding  which says that the demarcation of the border line between the two countries  shall be jointly conducted in accordance with the 1904 Convention, the 1907 treaty and its annexed Protocol and “‘ the Maps which are the results of demarcation works of the Commissions of Delimitation of the Boundary between Indo-China and Siam set up under the Convention of 1904 and the Treaty of 1907 between France and Siam, and other documents relating to the application of the Convention of 1904 and the Treaty of 1907 between France and Siam.’
After the approval of the works by the Commissions of Delimitation, maps (1/200.000e scale) have been printed by both the French Republic and the Kingdom of Siam. Both maps provide the same drawing of the international border line (Note of the French Embassy in Bangkok, 9 May 1949 – ICJ, Case concerning the Temple of Preah Vihear, Annexes, p. 104-105). But, since then, recently, Thailand publish a unilateral map that changes the international border in the vicinity of Preah Vihear temple and released a map that put Ta Moan and Ta Krabei temples in Thai territory.  To change unilaterally an international border line is a clear violation of the UN Charter and a brutal rupture of the Treaty of Amity and Cooperation between ASEAN Member States .
d) in November 2008 and in February and April 2009 there were meetings of the Joint Boundary Commission (JBC). The minutes of the three meetings have been approved in principle by the Thai Cabinet. But the ratification by the Thai appropriate institution remains unclear due to constitutional uncertainties and that makes difficult for the JBC to continue its work. When Thailand asks for the “resumption of the meetings of the JBC”, one must ask why Thailand is failing to ratify the minutes of the previous meetings.  “Pacta sun servanda” (Latin for “agreement must be kept”) is an international legal principle. It means that States are legally bind by the treaties, conventions, memorandum of understanding they sign. Thailand failed and still is failing to respect this principle which is at the core of international law as it is confirmed by article 26 of the Vienna Convention on the Law of Treaties.   How can one trust a country that systematically fails to comply with the bilateral and international instruments it signs ? How is it possible to trust a Prime Minister who declares that Memorandum of Understanding” (a diplomatic instrument that falls under the broad category of treaty), are “only pieces of paper without biding obligations” (Abhisit, 7 August 2010)    2. Why a bilateral process doesn’t work ?
Thai officials use to say that “the dispute could be settled in bilateral level”.  If it was so easy, why it’s so hard to find a settlement ? Nothing came through bilateral negotiations.  It was already like that between July 1954 (when Thai troops occupied the Preah Vihear Temple) until September 1959 (when Cambodia brought the case to the ICJ) : 5 years of bilateral negotiations with Thailand failed to reach a solution based on previous bilateral conventions and treaties.
Today, the main reasons are :
a) the legal insecurity created by Thailand which refuses to be bind by bilateral conventions and treaties signed  previously.

b) the refusal by the Thai side to ratify previous agreements reached between November 2008 and April 2009 within the framework of the Joint Boundary Commission.
c) the delay or the refusal by the Thai side to attend scheduled meetings, even bilateral talks is a deep and contradictory interpretation of the  ICJ 1962 decision.    The Thai decision to reject the map commonly agreed during  more than one century makes impossible any agreement. The 1962 ICJ Judgment is based on that map. But for Thailand, the ICJ “did not in any case determine the location of the boundary between Cambodia and Thailand”.   This is a clear denunciation of the 1908 bilateral agreement on the map, of the 1920, 1925, 1937 and 1946 convention, treaty and agreement.
By publishing unilateral maps that change the international border line, Thailand is denouncing the 2000 MOU between the two countries.  Through various judgements, the ICJ made clear that any unilateral denunciation of a bilateral agreement may lead to the ICJ.  There is a need that the international Justice gives a biding interpretation of its 1962 Judgment.  This application made by Cambodia to the ICJ doesn’t interfere with the Indonesian mediation whose aim is to help both parties to avoid military clashes. Facing the total failure of bilateral negotiations, Cambodia makes the political choice to prefer international legal mediation than violent methods to solve the conflict.
Raoul Marc JENNAR Adviser to the Royal Government of Cambodia 5. V. 2011