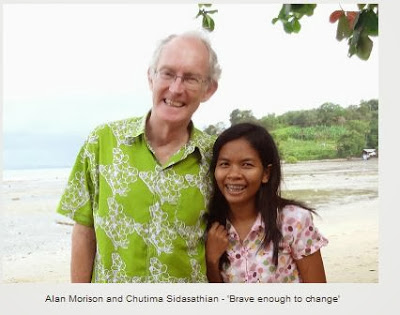 In case some of you have not spotted it Alan Morison and Chutima Sidasathian of Phuketwan have been accused of libel and libel under the Computer Data Act by a Captain Panlob Komtonlok of the Royal Thai Navy in relation to part of a Reuters report on the plight of the Rohingyas.

Alan and Chutima have led the field and have been consistently leagues ahead of the other media in their investigations of what happens to the Rohingya from Burma who are landed on Thailand’s shores.  So this action is galling.

Alan has put up a spirited defence and it seems quite clear the Royal Thai Navy should not be in a battle with the intrepid duo.

But the use of the Computer Crime Act, as readers of this website will have already gathered, to attack journalists is getting more and more common.  In most countries even libel is only a civil offence. Here the Thai authorities have made the game even worse.  The land of the free?

I understand in the complaint the lawyers have translated Thai military into Thai Navy when in fact the more serious allegations relate to what happens to the Rohingya when they are actually in Thailand –not floating off shore – although CNN did do a report about the Rohingya being pushed out to sea by, er, people in uniform with boats.

So we should all support journalists who are doing a difficult job here under laws which best suit a totalitarian state.