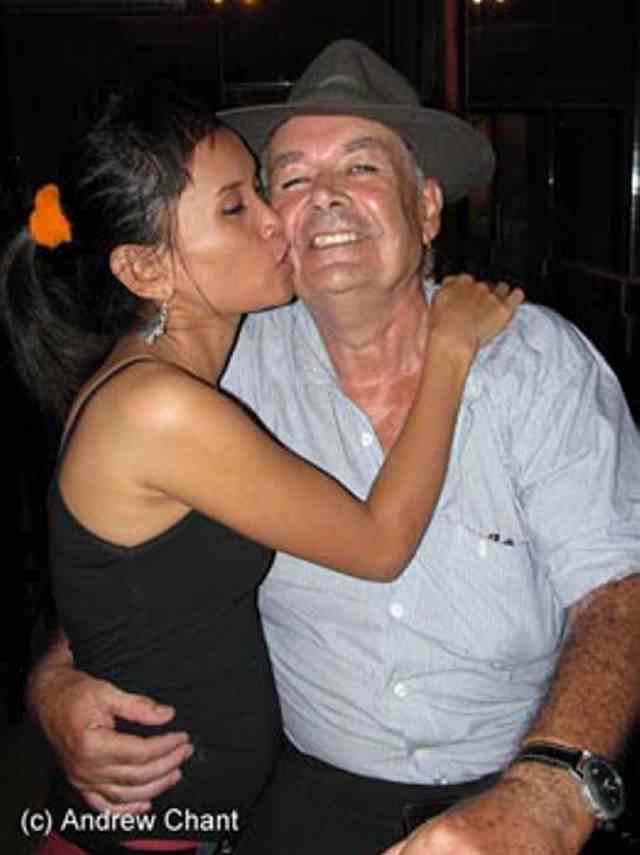 INFAMY! INFAMY! THEY’VE ALL GOT IT ‘IN FOR ME’
ANDREW DRUMMOND, 28 April 2012
British child abuser David Fletcher, exposed by the ‘Flying Sporran’, after being caught grooming kids on a Phnom Penh garbage dump and attempting to buy a teenage bride, has written from prison in Thailand promising to expose his enemies.

Lording it in a Phnom Penh bar with a much older companion!
And No 1 on the list is one Andrew Drummond, the ‘gutter journalist’, whom he says is running from the police and has been beaten up outside the Ambassador Hotel in Bangkok.

Photographer Andrew Chant and I exposed Fletcher here and here some two years ago after travelling to Phnom Penh acting on a tip off from the webmaster of the Khmer 440 website.

The stories led to Fletcher fleeing the country and being arrested in Bangkok. And yes we had to descend to the gutter to accompany him around the garbage dump and on a night out in Phnom Penh. But we climbed out afterwards.

Fletcher, who had a previous history of child abuse in Britain, is currently in Bangkok Special Prison, Khlong Prem, Lard Yao, still awaiting extradition to Cambodia, after being sentenced to 10 years jail last year for the rape of a minor from the garbage dump in Phnom Penh.

For a second there I thought Fletcher had actually got a rare copy of Drew Noyes’ Pattaya Times, but no apparently he has access to the internet and has even set up an internet blog. You can read his ramblings here.

He even accuses me of paying a bribe to secure his extradition warrant, while at the same time saying I am broke. Indeed I would be if I paid a bribe.

Fletcher, Prisoner Number 3421/53 in the prison’s Dan 1, announced plans for an e-book on Amazon, in a letter to Scott Neeson of the Cambodian Children’s Fund, apparently his number two enemy.

Scott Neeson, head of the Cambodian Children’s Fund at his children’s home
Numbers 3, 4 and 5 on his hit list are the Phnom Penh Post, Cambodia Daily, and the Khmer 440 website. Seems Fletcher is not a very happy bunny at the moment, which may please a few people.

“The malicious chickens are coming home to roost and haunt these liars concerning “The Conspiracy” they conspired against Fletcher. Read all in his forthcoming book “The Conspiracy” death of the dump run. All names, places, bribes and corruption, true events supported by indisputable proof, including Drummond and his “ilk” (The Conspiracy).

Available soon as e-book on amazon.com”

Anyway as I have spoken to one of his victims, now an adult, in Britain, I have not been too moved by his ‘press release’ but what better accolade than to be attacked by ‘Fletch’? And I am in good company. Scott Neeson was the former marketing director of ‘Fox’ in Hollywood before he jacked everything in to start the Cambodia Children’s Fund – an amazing story in itself.

Exploiting children of the dump