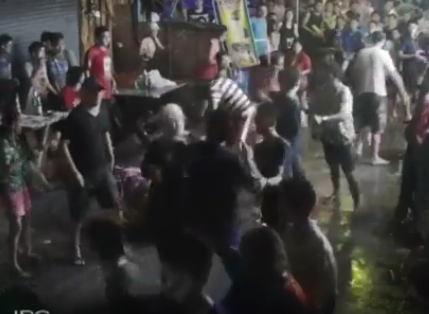 ALL FLOORED AND LEFT LIFE-LESS

A vicious attack by Thais on a British tourist family in Thailand all of whom were hospitalised has been caught on CCTV and put up on YouTube. 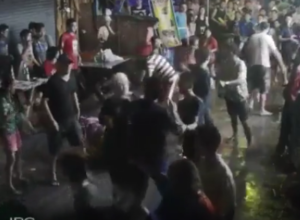 British woman in light hair takes full blow to her face before going down. Their three motionless bodies were left on the ground as their attackers sauntered off.

The family, a couple with their grown up son were attacked in the Thai beach resort of Hua Hin, where the King of Thailand keeps his summer palace.

All three were attacked by a group of Thai men after reportedly coming out of a bar.

The woman was also kicked on the ground. The incident took place in a street of small bars called Soi Bintabaht.

A witness on the Hua Hin internet foreigners forum calling himself ‘Usual Suspect’ reported that a group of Thai youths had been looking for trouble in the area during the Songkran New Year water splashing holiday on April 13th.

“The girls in the bar I was in all night waved goodbye to 2Two elderly customers and their son and my wife & I followed only seconds after them.
Within 20-30 meters of leaving the bar the Thais were punching the 65yr-old-lady in the face!
The elderly gentleman was down on the floor and their son was beaten very badly!
“At this point I caught up to the scene and pushed one of the youths away from the woman. I got severely punched & kicked for my troubles, but felt the need to protect this frail lady.
“The three of them are still hospitalised and one will need cosmetic dental work done,
“Not one person (other than myself) came to aid these old folk and they ended up laid in the road bleeding.so if you’re still out in the wee hours tonight please be alert.
These pockets of youths were intent on causing harm abd did blend in with all others beforehand.”

Pack attacks are frequent in Thailand but are rarely reported in the international media. They often happen after a tourist queries and refuses to pay a bill and sometimes when tourists are inebriated and are unaware that confrontations of any kind should be avoided in this South East Asian country.

They can also follow perceived insults and often happen if a bar girl is short-changed.

Most often Thais who are not involved in the argument will join in and attack the foreigners.

Hua Hin Police say that have one man in custody and are looking for two others.