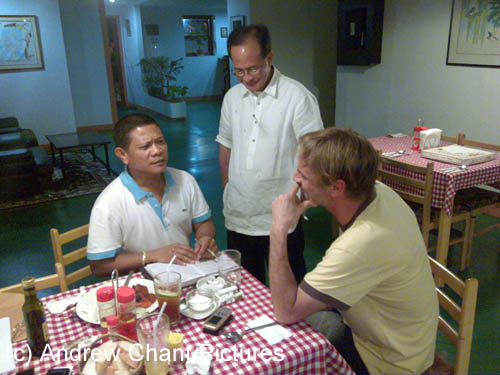 A British merchant navy captain who
was gunned down in the Philippines had applied to join a witness
protection programme after being caught in an arms smuggling operation.
Bruce Anthony Jones, 50, who led a wealthy expatriate
life-style with his Filipina wife was ambushed in his car outside
Angeles City 90 miles north of Manila.

His lawyer had earlier asked the Philippines Justice Ministry to give
put him in a witness protection programme after he promised to reveal
details of the bosses of a gang smuggling Indonesian made assault rifles
into the Philippines.

He had surrendered himself to the Customs Enforcement and Security
Service accompanied by his lawyer and a reporter from the Manila
Bulletin after a ship he commanded was found to be carrying illegal arms
into the Philippines from Indonesia.
CESS Director Nestorio Gualberto said he had recommended to the
Philippine Justice Secretary that Jones and a Georgian crew member of
the MV Ufuk  be considered as prime witnesses in the arms smuggling
case. The authorities were unable to provide Jones protection.
Police confirmed today that their main suspects were others involved in an arms smuggling operation uncovered last year.
And journalist Mario T. Supnad who brought the British seaman out of
hiding said: ‘I have no doubt Jones was killed by the group smuggling
these weapons.’
Jones was gunned down by an assailants riding in tandem on a
motor-cycles  which pulled up alongside his Toyota 4X4 on Tuesday
afternoon.  Two other Britons, David Smith part-owner of an arms
company, and Derek Neville, a yacht skipper, have also been charged in
connection with an arms seizure last August.
Bruce’s wife, Maricel Amaray, who was injured in the attack, is being treated in a local hospital.
Senior Supt. Danilo Bautista said today:’ He had complained of receiving
death threats in Olangapo City where he has been temporarily staying.
‘He believed he had become the target of the foreign gun smuggling
syndicate after he disclosed to the police and the media those who he
believed were behind the gun smuggling’

Last year in August 2009 Jones commanded the ship ‘Captain Ufuk’ in
the Philippines off Bataan. But he left with his pregnant wife and
boarded a private yacht the ‘Mou Man Tai’ captained by another Briton
Derek Neville, hours before the ‘Captain Ufuk’ was raided by Philippines
Customs officials.
He was replaced by a South African Captain Lawrence Burne.
The ‘Captain Ufuk’, is a Panamanian registered ship but owned by a
Manila company, La Plata Trading, which was working with the Red White
& Blue Arms Company, owned jointly by Briton David Smith and some
Filipinos. Jones had picked up the ship, which had a crew of 14 Georgian
nationals in Turkey.
On board Philippines Customs found crates of high powered ‘Galil’
Israeli rifles and a consignment of ten pistols made under licence by
the Indonesian arms company Pindad. The arms were valued at US$2.04
million.

Indonesian authorities say the rifles, were released for delivery to
the African republic of Mali. But the pistols had been ordered by a
Philippines shooting club. In fact all the arms were destined for the
Philippines.
At the time the Associated Press reported unidentified officials as
saying they suspected the intended recipients of the guns could be
Muslim radicals, communist rebels or private armies of politicians
taking part in elections.
Bruce Jones later surrendered to authorities and was bailed.
‘I saw nothing wrong with the consignment. It was escorted to my ship by Indonesian armed forces’.
His lawyer Joe Frank Zuniega said: ‘Jones is afraid for his life and
claimed that he is a victim and not a suspect. He is expected to
disclose information and unmask those behind the operation.’
Jones claimed he had information which implicated another Briton and
senior officials in the Philippines police and ironically also the
Department of Justice.
Jones was arrested again on July this year where  at the Palm Tree
Resort in Olongapo City, 90 kilometres north-west of Manila, police
officers say they discovered in his van a pistol, two rifles and three
plastic sachets of methamphetamine hydrochloride or ‘ice’,  locally
known as shabu.
It was a set up, his lawyer said.
Corrections/Updates: Andrew Drummond October/07/10
Bruce Jones could sort of wear the cap merchant navy captain but in
his former days in Bristol he worked for the Bristol Ferry Company and
No. 7 Boats, local ferry companies.

I
am happy to correct the impression that he led a wealthy expat
lifestyle. He was in fact living very much on a day to day basis,
something now confirmed by several people who knew him,
For the latest story go here