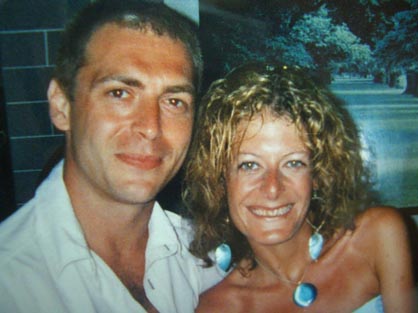 From The Times
May 25, 2006
Aristocrats’ black sheep jailed for Thai murder
By Hellen Nugent in London and Andrew Drummond in Phuket
THE parents of a British teacher murdered in Thailand by her boyfriend said yesterday that their daughter’s life had been cut short by a pathological liar who charmed his way into her affections.

Paul Chetwynd-Talbot with Debra O’Hanlon
Paul Chetwynd-Talbot, 32, the black sheep of the Earl of Shrewsbury’s family, was jailed for ten years for killing Debra O’Hanlon after an argument over a glass of cognac. He said that the death of his girlfriend, 31, in their holiday apartment on the island of Phuket was accidental.
Speaking to The Times from their home in Wellingborough, Northamptonshire, after the verdict, Patricia O’Hanlon, Ms O’Hanlon’s mother, said: ‘It is too early to feel any relief but the one thing I do feel is that he has been convicted of murder, which is what I wanted, but the sentence is not long enough. It is us who have a life sentence.’
Ms O’Hanlon’s father, Malcolm, 60, added: ‘It was easy to tell when Paul was lying, his mouth was open. He was very well educated so he could charm anybody, he had that gift. Everybody could see through him but those who were directly involved with him. Debra thought the world of him.’
The couple met when Chetwynd-Talbot was working as a timeshare salesman in Tenerife in 2003. They came together again in Thailand last year. After some more time apart, Ms O’Hanlon returned to Phuket in August to convince the penniless Chetwynd-Talbot to return to England.
On the night of the murder they had been drinking and came to blows after Chetwynd-Talbot demanded one more RÃƒÆ’Ã‚Â©my Martin cognac. The couple left the bar together to return to their rented room, but an hour later she was dead with a smashed skull and broken neck. After slashing his wrists, Chetwynd-Talbot gave himself up to police.
He told Phuket Provincial Court: ‘We had an argument. I threw her across the room and I think she broke her neck. I tried to revive her, but she did not wake up.’
He was born Paul Rowlands in Bristol but changed his named to Chetwynd-Talbot after his mother married into the aristocratic family. At the time of his arrest, his namesake, Paul Chetwynd-Talbot, the younger brother of the 22nd Earl of Shrewsbury, said: ‘He has been the bane of my life for years. Every time he runs up a debt, people come to me about it. He is a thoroughly bad lot who has gone around causing a lot of trouble.’
Mrs O’Hanlon said: ‘So many people tried to tell Debra that he wasn’t the person she should have been with. This is just such an incredible waste for someone who had done so much good and had so much to give. Debra gave such a lot in her short life and he gave nothing.’
In a cell below the court, Chetwynd-Talbot said: ‘I have to live with this for the rest of my days. To her family I say I am incredibly sorry.
‘There are no words to express how guilty I feel. It was an argument over nothing, but it was an accident.’
Ms O’Hanlon had taught at King’s Cliffe Endowed Primary School in Peterborough and was due to start as deputy head of Wollaston Community Primary School in Wellingborough. Mr O’Hanlon said: ‘Debra had a brilliant career ahead of her. She was a brilliant teacher, it is what she loved doing. She always wanted to be a teacher.’
Somsak Chattay, the lawyer for Chetwynd-Talbot, said: ‘With allowances given for royal pardons and parole, he could be released within five years.’