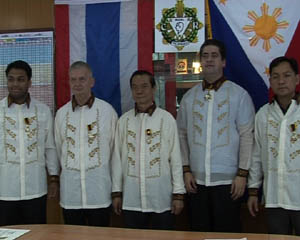 Thai police have found themselves a new role in Pattaya, it seems. They are now giving away Knighthoods, not only to themselves, but also to local foreigners, one of whom is clawing his way up the social strata after an interesting earlier career in Copenhagen’s red light district.

Seriously stories in Thailand are so off the wall that you just can’t make them up.  Maybe Niels Colov, (second from left) owner of the Pattaya People is playing a game of one-upman ship with another chap, an American called called Drew Noyes, owner of the weird ‘Pattaya Times’  newspaper, who has had his staff continually update his ‘glowing’ but scarcely credible biography’ on the internet, and who claims to be a lawyer and to have a royal decoration from the Queen of Thailand.
(He does but so do many others. It was for contributing stuff to the armed forces. I do not think it is de rigeur for foreigners to continually boast about royal decorations or connections)  Don’t google his name you’ll miss breakfast, lunch tea and dinner by the time you finish. The Knighthoods involved are those of the ‘Knights of Rizal’ awarded by the people who provide the cigarette rolling papers so many people use for their their exotic joints.

No I’m joking. Jose Rizal is a Philippines national hero, author, activist, and expert swordsman and marksman. He was executed or ‘martyred’ during the Philippines Revolution against the Spaniards in 1896.  In 1951 Filipinos decided to create a Knighthood in his honour, because of his well devised plans for the future of the Philippines, none of which have they seem to have implemented.

The main objectives of the ‘Order of the Knights of Rizal’ are to study and spread the teachings of Jose Rizal and express their love and support for the Philippines.So I guess Pattaya police will have to brush up on their linguistics and get their heads down in ‘Noli Me Tangere’ and ‘El Filibusterismo’.

The ceremony was conducted by Police Major General Viboon Pakamas and Colonel George Reiff, says Colov’s Pattaya People.  Reiff is described basically as the all-Thailand- chief of these ‘Caballeros’ and the recipients all dressed up as Worzel Gummidge for the event at Pattaya Police station.
(Below: The Worzel smock modelled here by Howard Allen of Kent. No gold braid but similar ventilation and popular at dinner parties and was once considered by the Masons, but obviously turned down in favour of aprons)

Seriously I am not taking the Michael out of the Knights of Rizal. I am sure the aims and motives of the organization are very worthy. But it does remind me of a former Belgian mercenary, who designed his own medals for bravery, and dished them out at army bases throughout Thailand. And don’t forget many ne’er do wells including people convicted on child abuse charges have gained membership of charitable organisations in this eastern seaboard city.
(I am not including Mr.Colov in this category. Mr. Colov’s move from Denmark’s red light district to Thailand’s red light district was a clear act of reformation and he has paid his debt to society for offences of violence, pimping, and handling stolen goods.  His reformation is of course complete and he remains a pillar of local society and will of course be in his future home in Angeles City, Philippines.
However based on the people who have appeared on this site I can see a few potential applicants for these Knighthoods
Sir Darren of Oxley, for services to literature, the consumers of unusual substances in South Yorkshire nightclubs and Donald Whiting currently in a wheelchair somewhere in Bangkok.
Sir Michael of Strouse, for services to pornography world-wide, Kat,  the Optmimists Club of Pattaya and the BOI
Dame Jim Lumdsen of Falkirk, for services to boys, boys boys,
Sir Martin Frutin, of Ravelstone Dykes,  for posthumous services to the Masonic Lodge, and boys, boys, boys.
Sir Tony Poer of Miami for services to the ‘Beaver Bong’ and HD video
Sir Peter Storrow of Brighton, for the international promotion of Pattaya’s ‘Rear of the Year’ and services to U.K. Customs & Revenue
Sir Dingeman Hendrikse of the Dutch Antilles, for putting his clients money in the Dutch Antilles
Sir Stanley Fry of Epsom (posthumous) for promoting the arrival of sarf London wide-boy property dealers on Thailand’s eastern seabord.
And of course lets not forget Sir Drew Noyes of Carolina Beach for services to bogus share dealing, property fraud, and art… the art of the unbelievable resume.
Breakfast Link: Drew Noyes ‘Fourteeen years service to the King’
Lunch Link: Drew Noyes personal profile at ‘Brazencareerist.com’
Tea Link: Drew Noyes – My profile
Dinner Link: Who is Drew Noyes