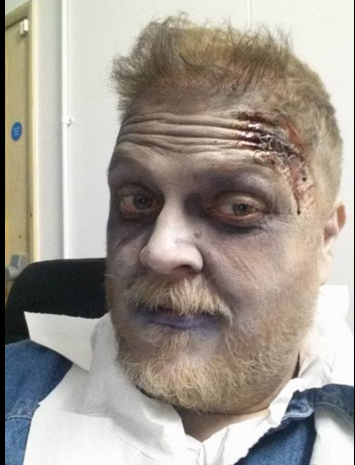 In the light of arrests warrant issued against them the bosses of Pattaya One Stop Service Center have been reducing their profile on the internet – along with their colleague in villainy our famous fake lawyer from Scotland. 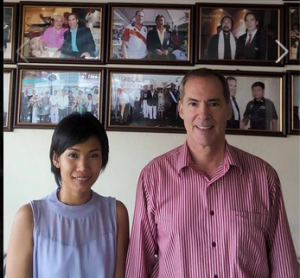 Drew Walter Noyes, Wanrapa Boonsu, and Brian Goudie, aka Brian Goldie have closed their Facebook  and Twitter accounts following arrests warrant for all three of them now, belatedly issued by Pattaya Provincial Court.
Drew Noyes has of course long since fled to the United States, and, as he perhaps had little fear of arrest across the pond for their for crimes in Thailand (both he and his common law wife were sentenced to two years in jail for extortion), this may suggest he also does not want the US authorities to give him grief.
One of his last messages on his Facebook page and Twitter was to promise his former nanny that he would soon return to see his newborn son….his ninth c

hild by a Thai woman.

Noyes and Boonsu repeatedly failed to turn up to hear the result of their appeal into conviction of attempting to extort the Thonglor beauty clinic in Jomtien out of 7 million Thai baht – on pain of a police raid and subsequent bad publicity in their now defunct ‘newspaper’ the ‘Pattaya Times’.
The result of the appeal will be read next month regardless. 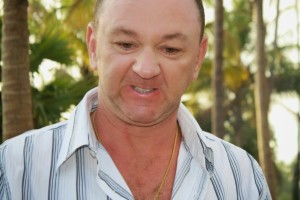 Brian Goudie is in an even worse position. He has been convicted of embezzlement and fraud and is appealing a three year jail sentence. But not only that a warrant of arrest has been issued against him for fraud and ‘revenge porn’ related charges and strong objections have been presented for refusing any possibility of bail. The court has confiscated his passport.
Both Noyes and Goudie of course are known as ‘runners’. Noyes fled from the United States after being exposed in the Star in Wilmington, North Carolina, as a man of ‘myriad lies’ with a history of share and property fraud, and sexual harassment. He also had an FBI felony record.
He arrived in Thailand announcing that he was a lawyer and ‘the most credible re-assuring American businessman’ you could wish to meet and promoted his image as also a publisher, ardent Royalist, sharp shooting, parachuting, charity donating, problem fixing, do it all. He also claimed he was FBI cleared.

Goudie, under the name Goldie, fled from Scotland shortly before a warrant of arrest was issued against him for defrauding the Royal Bank of Scotland (his employer). He settled in Australia where he was convicted and jailed for six years for defrauding a Perth mining company ( his employer). 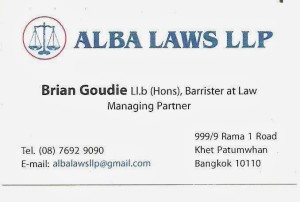 He arrived in Thailand, skipping a hearing of the Australian Administrative Appeals Tribunal, which almost certainly would have ordered his deportation, and announced he was a British barrister and former officer in the Royal Marines, setting up a company called Alba Laws.
He sought clients in Thai jails promising them all freedom at a cost.
On this site we called their bluffs. Despite multiple libel actions and concerted internet campaigns against their enemies, all of whom they labelled criminals, even the court in Pattaya has now been forced to act. 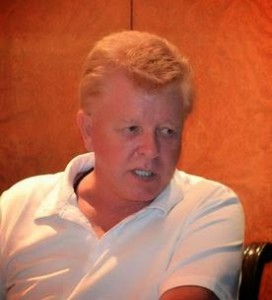 Finally David John Hanks, from Girvan, Ayrshire, Scotland, has now returned to Australia from where he has told the court he has a ‘bacterial infection’.  Hanks, the gofer for both Noyes and Goudie, is understood to be facing charges in connection with aiding and abetting Noyes in Boosu in their extortion. 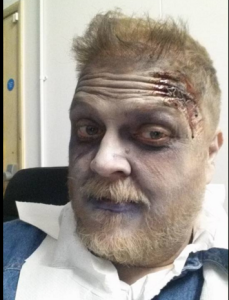 TITTLE TATTLE: Back in London two victims of Drew Noyes last night prematurely celebrated their victory over Noyes. I say prematurely because total victory would require these people to be locked up.
They are electrical engineer Ally Cooper and former University Challenge contestant Thor Halland who cracked open a few bottles of champagne.
Halland had been recently as a zombie in some sort of Night of the Living Dead production and Cooper informs me that not much make-up was required and has sent the picture below 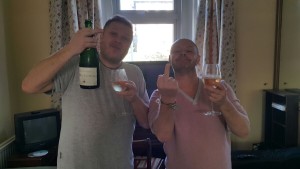