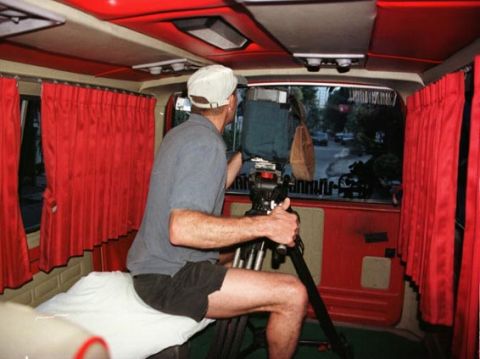 (Secret filming)
April 29 1999
Credit: Investigation in Thailand by Andrew Drummond
Early in 1999 Andrew Drummond was contacted by London Weekend
Television. Their Factual Programming Department had put in a proposal
to make a programme for Channel 4 Dispatches on the trafficking of women
into Britain to work as service girls in brothels/ massage parlours.
In recent weeks Thai girls had fled brothels in London, claiming that
on arrival in Britain their passports had been confiscated and they
were forced to work for nothing for six months just to pay off the costs
of getting there.
Some claimed, including one pregnant women, that they were told they
were going to work in restaurants and they had identified a Chinese man
known as Boon Tam, who was the man sending them from Bangkok. They said
they were beaten if the did not service clients sexually.
The information given to Andrew Drummond was of no news to him. This was how these traders normally worked.
Some of the girls went willingly and knew what they were doing. Others did not. But all were cheated nonetheless.
Andrew Drummond had already investigated a similar operation run by a
Briton called Ronnie Miller from Northampton (jailed in the U.K. in
2000) which put him at an advantage. The name Boon Tam was however new.

city travel agency and he also found two of his foreign agents, New

Langslow was running his own bar in the city’s Sukhumvit 23.  McKenzie (right) ran
an English
language school. But they had both supplemented their income
by ‘riding shotgun’ – running
Thai girls abroad posing as their
boyfriends.

Bruce was desperate to sell his bar so Andrew Drummond sent in one of
his team to pose as a potential buyer. LWT on their part sent in a
reporter posing as a London massage parlour
owner, for which they had
already established a business, which could be found on the internet.

In his bar Langslow (left) was famously caught on camera deriding his
charges: ‘They’re all straight out of the f……..g paddy fields!’ he said.

Langslow later went on to run a travel business in Bangkok running tourist to a Tiger Temple in Kanchanaburi and Hell Fire Pass.

Andrew Drummond also knew one of the couriers who worked for Boon
Tam
and Langslow, who was able to provide information on forthcoming
meetings. In addition to that he sent in a Thai female member of his
team to pose as a girl seeking work in England.

The trap was set. Unwitting Langslow led the team secretly filming
first to Boon Tam and then to another New Zealander called Christina,
known to the girls as ‘Honey’ who was another recruiter.

Using a combination of information from all three ’embedded’ sources,
the crew were able to fully document the activities of the traffickers
in Bangkok for the LWT cameras.
Through Sudarat Sereewat of FACE (Fight Against Child Exploitation)
Andrew Drummond also set up interviews with young Thai girls who had
been rescued from such brothels both in the U.K. and Thailand on
condition the girls were not identified. The victims in Thailand were
juveniles.

Back in Britain the crew also did showdowns with the receivers there.
Police rescued some 8 girls from massage parlours like the Solitaire in
North East London. (below)

Sadly the producers sent Andrew Drummond the script only after the
programme was cut. They were unable or unwilling to make some very
obvious corrections.

On the day of broadcast C4’s promotions department leafleted
thousands
of homes in Britain with the flyer ‘Is Thai Sex Slavery coming
to Britain?’
Moreover when the programme was aired it was clear the
producers had
broken their promises not to identify the the girls.

Andrew Drummond supported a complaint by Sudarat Sereewat to the
Broadcasting Standards Commission, which
preceded Ofcom. The complaint
was upheld.

In the meantime Sudarat had to arrange for the victims to be moved
out of their homes to ‘safe houses’ because in almost
all cases the
traffickers take the house documents of the girls, so if anything goes
wrong, they know they can seek
retribution – and that can get violent.*New Zealand Press Association report

Read the judgment by the BSC here: