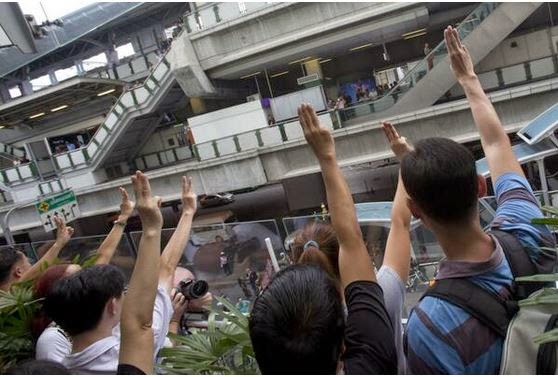 ACTIVISTS BEING HELD IN SECRET -CLAIM


Human Rights Watch today issued a statement criticising the military for holding on to political activist Kritsuda Khunasen and expressed concern about people being held in secret.

(New York, June 11, 2014) – The Thai military authorities should immediately confirm the location of a political activist secretly held for nearly two weeks and free her unless she is charged with a credible offense, Human Rights Watch said today. The military junta should cease carrying out arbitrary arrests and detentions, including apparent forced disappearances.

On the evening of May 28, 2014, soldiers from the 14th Military Circle arrested Kritsuda Khunasen, 27, during a raid of the United Front for Democracy against Dictatorship (UDD), known as the Red Shirts, in Chonburi province’s Muang district. Since then, according to her family, local military commanders have refused to provide information on her whereabouts or access to lawyers and family members.

“The Thai junta’s detentions are exacerbated by holding people in secret,” said Brad Adams, Asia director at Human Rights Watch. “Kritsuda and all the others held without being charged with a credible offense should be freed immediately.”

Kritsuda is a well-known UDD-affiliated activist who has been instrumental in a campaign to provide legal and humanitarian assistance to UDD members and supporters prosecuted and imprisoned in connection with the 2010 political confrontations with the then-government of Prime Minister Abhisit Vejjajiva.

Kritsuda’s detention has already exceeded the seven-day administrative detention period permitted under the 1914 Martial Law Act invoked by the military. Her family says it has no official notification that she was charged and transferred to a remand facility in Chonburi province or elsewhere.

Human Rights Watch has received further reports that politicians from the ousted ruling Pheu Thai Party and members of the UDD have been arbitrarily arrested and detained incommunicado in undisclosed locations.

In one case, on June 9, 2014, at approximately 4 p.m., soldiers raided the house of Singthong Buachoom, 51, an outspoken Pheu Thai Party member and UDD leader, in Bangkok’s Wang Thonglang district. Singthong was allegedly put in a minivan and driven to an undisclosed location. Singthong’s family told the media that the raid happened without any summons or arrest warrant. The military has provided no information on the basis for Singthong’s arrest or where he was taken.

Enforced disappearances are defined under international law as the arrest or detention of a person by state officials or their agents followed by a refusal to acknowledge the deprivation of liberty, or to reveal the person’s fate or whereabouts. Enforced disappearances violate a range of fundamental human rights protected under the International Covenant on Civil and Political Rights, to which Thailand is a party, including prohibitions against arbitrary arrest and detention; torture and other cruel, inhuman, or degrading treatment; and extrajudicial execution.

The military seized power in a coup on May 22 and established the National Council for Peace and Order (NCPO), comprised of all branches of armed forces and the police. Since then, the military has detained more than 200 ruling party and opposition politicians, activists, journalists, and people accused of supporting the deposed government, disrespecting or offending the monarchy, or being involved in anti-coup protests and activities.

While many have since been released, the military has continued to issue new orders summoning additional people to turn themselves in. After reporting to the military, those summoned are usually interrogated and then sent to be detained incommunicado in unofficial places of detention, such as military camps. Those who fail to report to an NCPO summons face arrest and prosecution, and are placed on an immigration blacklist to prohibit them from leaving Thailand.

“The military needs to stop summarily arresting anyone they want and taking them to undisclosed locations,” Adams said. “The military’s failure to disclose where they are holding people heightens the concerns for their safety.”

WESTERN MEDIA MUST NOT DISTORT THE FACTS

This one is ok until it falls apart when the author Willian Heineke seems to admit his angle is tourism.