HIS CAR WAS TORCHED. HE WAS GUNNED DOWN AND PARALYSED FOR LIFE.


THEN HE GOT FINANCIAL ADVICE IN BANGKOK! **

Former U.S. Marine Donald ‘Biff’ Whiting may possibly be resentful of settling down in Thailand with his wife Dolly a senior educationalist.

Readers of this site will already know how he was gunned down in Hua Hin in a housing dispute, and of his fight, so far futile, to get justice, and also the fact that he is now paralysed from the waist down.

He had a row with the man he bought a house from, British developer Darren Oxley. Subsequently his car was torched, and finally he was gunned down outside his home.

Oxley’s wife and two other men were later charged with the attempted murder – but justice has been slow –  even though the then Prime Minister Abhisit Vejjajiva ordered this case and five others to be fast tracked.
.

Anyway, concerned about how they were going to handle their finances in terms of the ongoing medical bills now that Donald needed 24 hour care, they turned to Bangkok based Andrew Wood, of Platinum Financial Services, Hong Kong, after reading his weekly column in the ‘Bangkok Post’.

Along he came and put together a package for them for a US$1 million.

Now the thing about investments is there is always a risk to an investment, so you need to know your broker knows what he is doing.

But having taken more than his fair share of knocks in Thailand Biff and Dolly optioned for ‘low risk’ ventures with PFS.

Andrew Wood confirmed in writing with a pretty graph showing where all their investments were and gave them the impression that he knew the quoted funds like the back of his hand. 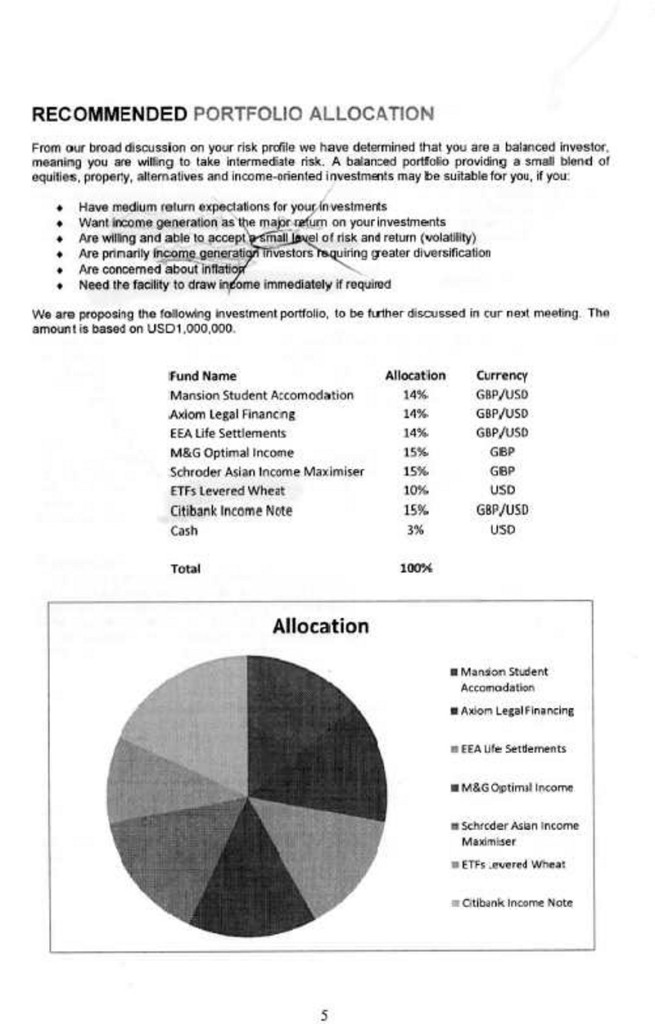 Some 14% per of their investment PFS was put in a fund called ‘Axiom Legal Financing’.

Wood, current holder of the ‘Flying Sporran’s’ IFA Award told them they not need by concerned as that investment was covered by insurance!

But that fund, run out of the Cayman Islands by Briton Tim Schools, has gone bust in yet another financial scandal and Dolly and Biff will never get their money back.

This is what Axiom was allegedly doing.

‘Axiom LFF provides short-term, fixed-interest loans to British law firms to finance specific litigation cases and matters of a non-litigious type, such as divorce. To provide investors with a level of capital security, the funding facilities are insured by UK FSA-regulated insurance companies against the possible non-return of the funding by the law firms due to bankruptcy.’


What that means is that Axiom was funding legal cases in the United Kingdom which law firms believed they would win.

Axiom’s fund was not covered. The legal firms were covered. That’s because they all carry insurance against disasters in court!

And Axiom later announced it was also funding cases on behalf of council house tenants in Britain, whose purchases were mishandled.

But what was it actually doing? Actually the fund performed okay for a year and even won an award. 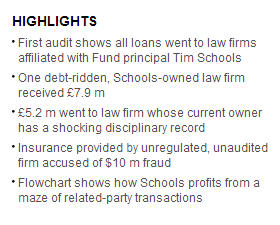 The balloon went up last August and by October David Marchant and ‘Offshore Alert’ was soon indicating where the money was going.

The Fund principal, he alleged, was dipping into his own fund.

What’s more Tim Schools faced 11 charges in the U.K. including failing to look after the interests of his clients.

Marchant, who said he had received taped evidence of the ‘wheeze’,  was a little more than concerned. 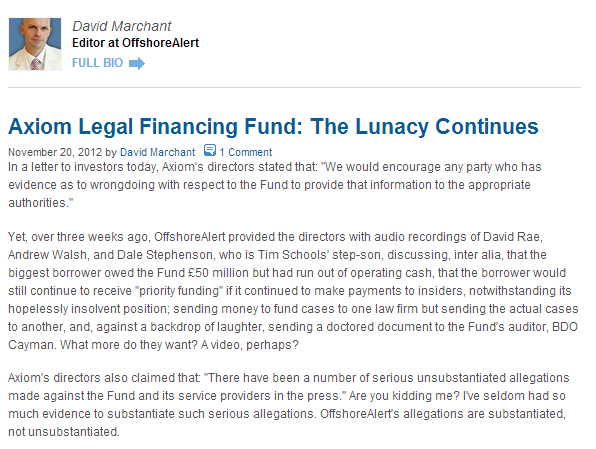 Biff and Dolly have lost in excess of US$100,000 and seem to have no recourse. It’s unlike they will get 25 cents on the dollar years ahead when the liquidators have finished.

They say they have been told by PFS that they will not even return their commissions of US$5000-US$6000 (on a no entry fee offering)  but instead have been told they will get an additional 5% return on investment on each extra US$100,000 they invest with them.  Hmm. That’s a difficult one.

But this is what David Marchant, who now appears to have been proved right, said they could do?

(Here’s the link to that blog) It may not be of much help to people who want to sue in Thailand. But as PFS is Hong Kong based there may be an option.

But can PFS, which evolved out of Barclay Spender International and which backed the now notorious ‘Football Fund’, be blamed? After all the Axiom Fund was listed by both Royal London and Zurich – those massive mutual life and pension fund guys.

And a lot of much bigger boys got screwed up too – or at least their clients did. These include, it is reported Aegon/Scottish Equitable, AVIVA, Canada Life,CMI Insurance, Friends Provident International,Generali. Irish Life.La Mondiale Europartner S.A and Legal & General International.

The point is there is little to stop Fund Managers doing what they want. Many brokers do not know what they are talking about and often they rubber stamp products on the lists of the above companies.

You know if you play with fire in the markets you can get burned easily. And since the last financial crash there has been no such thing as a 0% risk investment.

Biff took four bullets. The fifth bullet he may just have to bite.

A meeting last night between Biff, Dolly and PFS to improve on the offer above came to nothing. If they withdraw their cash from existing funds, said Dolly, they would lose in the region of US$60,000 – that will be the commissions.

But Dolly and Biff insist they wanted to make low risk investments.

When they asked PFS if they had done due diligence on Axion PFS insisted they had…besides, claimed PFS, added, Axiom was approved by Royal London.

It’s only after he had made the investment that he had received this document, which was actually provided by Axiom to local brokers in connection with their fund warning of a ‘substantial risk’.

Substantial risks? some mistake surely. It seems a little stronger than a normal disclaimer – and was followed by
A-HA!

But to be fair to PFS, the approval by Royal London and Zurich led other local brokers to also invest in the fund. But two contacted by this site said that in both cases they involved ‘high risk’ players – and even then, added one, 14 per cent of a total investment portfolio in Axiom  ‘seems rather on the high side’.

Yesterday the FSA, which sends me all their judgments, fined UBS nearly £10 million pounds for mishandling the AIG Fund which like Axion went into receivership.

‘A sample review by the FSA of sales of the Fund to 33 customers found that 19 were mis-sold and a considerable risk that 12 of the remaining 14 may have been mis-sold.  The FSA also reviewed 11 complaints made by these customers and found that all 11 had been assessed unfairly (albeit that six had been upheld by UBS).  UBS has agreed to conduct a redress programme for those customers who remained invested in the Fund at the time of its suspension.  It is estimated that compensation payable to customers will be around £10 million.’


That sounds good until you learn investors put in £3.5 billion.

SO WHAT DID UBS DO WRONG? THIS IS WHAT THE FSA SAID THEY WERE GUILTY OF:

 failing to carry out adequate due diligence on the Fund before selling it to customers, so UBS had an inadequate understanding of the nature of the Fund’s assets and the consequent risks.  In addition, UBS failed to ensure its advisers were provided with appropriate training about the Fund so could not correctly determine its suitability for customers;
 advisers recommending the Fund to some customers even though it did not provide the level of capital security that they apparently sought.  Customers were not sent suitability reports when UBS sold the Fund, so customers were not given a record of why the Fund was suitable for them;
 indicating to customers that the Fund was a cash fund that invested in money market instruments.  Instead a significant proportion of the Fund was invested in other assets;

The problem of course about investing as an expatriate is what do you do when things go wrong?

Attempts have been made to contact both Mark Kirkham and Andrew Wood ay PFS, Bangkok. They have either been out of office or in meetings. However should they wish to reply they will be given space here.

** At this point I should say the headline to this article might be considered a slur to those bona fide financial advisors in Bangkok and other parts of Thailand with deserved excellent reputations and who may even advertise here – but they will know what I mean. No such slur is intended.


12 February 2013 Dear Shareholders  Re: Axiom Legal Financing Fund, Segregated Portfolio, a segregated portfolio of JP SPC 1 (the “Fund”)
We are writing this letter to update holders of participating shares designated to the Fund (“Shareholders”) with respect to recent developments concerning the Fund.
Today the Honourable Mr. Justice Foster QC granted an order appointing Michael Saville and Hugh Dickson of Grant Thornton Specialist Services (Cayman) Limited and James Earp of Grant Thornton UK LLP (the “Receivers”) as receivers for the Fund in response to the directors’ application to the Grand Court of the Cayman Islands.  Justice Foster also ordered that Tangerine Investment Management Limited is to pay 60% of the Fund’s costs of the receivership application, with these costs to be taxed on the standard basis.
Going forward, the Receivers will be responsible for the operation and management of the Fund and its assets and we will no longer be involved with the operations of the Fund.
We expect that the Receivers will communicate directly with Shareholders in the next few days to provide an update to Shareholders and contact information for the Receivers.  In the meantime, the Fund’s administrator will forward any e-mails received with respect to the Fund from the investors@jpfa.ky e-mail address or enquiries received from the Fund’s website (www.axiomlff.com) to the Receivers.

The directors of JP SPC 1, on behalf of the
Axiom Legal Financing Fund, Segregated Portfolio