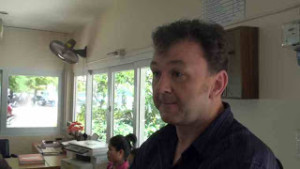 Brian Goldie, now Goudie, at Jomtien police sub station Pattaya, Thailand, where he now runs a company called Alba Law. Goldie, 44, from Falkirk, is a professional con man. He fled Scotland where an arrest warrant was issued for him defrauding the Royal Bank of Scotland and jailed in Australia for defrauding an Australian mining company. After serving his sentence he went to Thailand where he makes money making promises to prisoners with a flesh eating disease and helping people charged with child sexual abuse