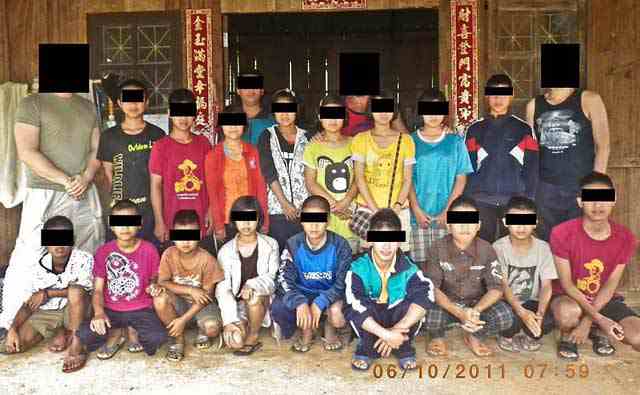 The Grey Man Posed Picture To Raise Funds – the headman called the kids together
The Australian charity – The Grey Man – which raised funds on the alleged rescue of 22 Akha Hill tribe children in Chiang Rai last year – claiming the children were destined for brothels in Pattaya and Thai sweatshops, is being investigated by the Queensland Police for alleged misleading advertising.< ?xml:namespace prefix = o ns = "urn:schemas-microsoft-com:office:office" />
This follows an investigation by Thailand’s Department of Special Investigation, backed up by the anti-trafficking organization Trafcord, and Thailand’s Ministry of Social Development and Human Security.
A file has been passed onto Queensland Police by the Australian Federal Police.

The Flying Sporran Picture of the same kids – The headman called the kids together
Last year a ‘The Grey Man’ team comprising a former British Special Forces soldier, an Australian ex-police officer, and an Australian bodyguard claimed they chased off human traffickers who were going to snatch the children.
An independent investigation by the ‘Flying Sporran’ showed the children pictured on the ‘Grey Man’ website and Facebook pages, were actually happily living with their families in Baan Khun Suay in Chiang Rai, and that a group picture taken of them with ‘Grey Man operatives’ was posed after the village headman called the children to be photographed, on the promise of aid for education and health.
No decision has yet been made to prosecute.  Last week ‘The Grey Man’ sent an officer to mediate with Thailand’s Department of Special Investigation.
The official claimed they did rescue a group of children and put them in a village hall for a night.
Apparently mistakes were made in the press releases.
Ben Svasti-Thomson, Director of Trafcord said: ‘The issue remains very cloudy. If there are traffickers we want them caught. But we do not have the information of who these people are.
‘If there are no traffickers why was the whole village branded as one where parents are happy to let their children to into the sex trade.’