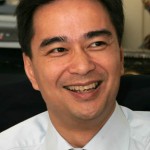 A former Eton scholar and Oxford University graduate was today elected Prime Minister of Thailand by a slim majority of 37 votes.
MPs elected Abhisit Vejjajiva, leader of the country’s Democratic Party, putting an end to rule, by telephone, of ousted Premier Thaksin Shinawatra, and the successive governments he attempted to control in his exile.
His opponent was a former Thai police chief Pracha Promnok of the Puea Pandin Party, a small party which at the last minute offered to accept the nomination for P.M.
Promnok accepted the nomination on behalf of supporters of Thaksin Shinawatra, after the ruling Peoples Power Party was dissolved for vote-buying.
A special session of the Thai Parliament was held for the vote. But the country will in any case soon have to go to the polls and put the issue to the people.
Vejjajiva became Thailand’s 27th Prime Minister with 238 votes, over Pracha’s 198.
But to achieve victory, the soft spoken, good-looking, classmate of Boris Johnson,  had to do a deal ‘with the devil’ and form a coalition with factions run by old ‘Godfathers’ in Thai politics.
It was hoped that the election would bring an end to Thailand’s woes, which has seen the country split in two, by yellow-shirted followers of the People’s Alliance for Democracy, who recently occupied Bangkok’s Suvarnabhumi airport, and the red-shirted followers of Thaksin Shinawatra.
But immediately after the result was announced angry red-shirted protesters picked up railings outside Parliament House and began throwing them. They also threw stones at cars leaving Parliament House.
Members of the Democratic Alliance Against Dictatorship believe Vejjajiva is a supporter of the PAD because of his anti-Thaksin stance.  They also believe that as Abhisit Vejjajiva is a member of Thailand’s old influential families, he will side with the country’s elite.
In fact he was against the military coup which ousted Thaksin and kept clear of politicking about the recent demonstrations. Traditionally he has always leaned to the left.
However the PAD put their support behind Vejjajiva, a class mate of Lord Mayor Boris Johnson both at  Eton and Oxford and a year above David Cameron,  because they regarded him as ‘clean’.
Born in Newcastle, Vejjajiva, 45, married with two children, entered Thai politics in the nineties, and became better known for his good looks rather than his policies, and became something of a pin-up in Thai women’s magazines.
His strong British connections, rather than help, may have actually hindered his path to power, in a political system which has been so riddled with corruption that it has ended in the recent demonstrations.
He has campaigned on a ticket of ethics rather than authoritarianism, better education, an increased minimum wage,  and will now almost certainly have to adopt and progress some of Thaksin Shinawatra’s policies to support the poor people in north eastern Thailand, who brought Thaksin Shinawatra to power.
Meanwhile Thaksin Shinawatra has clearly not given up his ambition to return to the political throne.
Convicted of corruption, and banned from Britain, Thaksin has been broadcasting to the nation from abroad  effectively running the People’s Power Party by phone.  He has told his supporters to be patient and wait adding that Britain ‘would feel sorrow’ from banning him from the U.K.

Meanwhile, while Abhisit , known at school as ‘Mark Vejj ‘  has not been brought up in the political mould of his friend Boris.
During his formative years in the Britain, where he mastered in political science and economics he has admitted: ‘I took part in many demonstrations against Margaret Thatcher.’
Boris Johnson has been quoted as saying of him: ‘He was an exact contemporary of mine at school and is a seriously clever fellow. I’m probably the only person in Parliament at the moment who can spell Vejjajiva, but that won’t last as I’m sure he’s going to do great things in Thailand. I spent a blissful time with him and his family in Bangkok one summer in the mid-Eighties.’