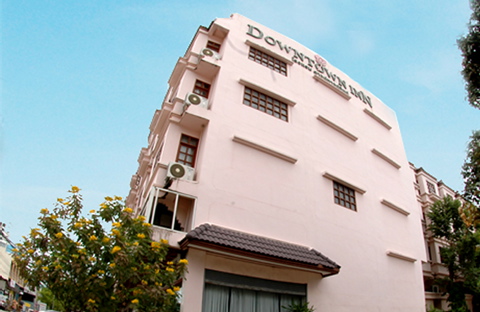 Today friends and relatives of Mr. Mah, who worked for Telplus Communications in Edmonton as a telephone installer and repairman, were seeking clarification of the cause of his death saying Mr. Mah had no history of any heart problem. The death was not made public at the time.

Now seven weeks have passed but still no toxicology tests have been returned.

Mr. Mah had been staying at the nearby People’s Place Hotel in Chiang Mai and had used the facilities including swimming pool of the Downtown Inn for which coupons were available in his own hotel lobby.

Bill Mah (left) with friend Ken Fraser
Ken Fraser, who was on golfing holiday with his friend from Alberta said: “His death is a complete mystery. He seemed fit enough with no history of heart problems. We have not been told his cause of death. We only have an initial report.”“That report states ‘Suspected natural disease pending lab reports and toxicology’, but we have not been given the results of the tests and we have pressed the Canadian consul to try and get answers for us.  I know Bill used the facilities at the Downtown Inn because he asked me to go there with him but I had other things to do. What natural disease are they saying he had?”Bill Mah died on January 26th and had been in Chiang Mai two weeks previous to his death.He first fell in on January 24th at a dinner party with friend and was dropped back at his hotel at 11 p.m.The following morning he complained of lack of sleep due to chest pains, said Mr. Fraser,  and was taken at 9 am to Chiang Mai Ram Hospital.“He was kept there for 24 hours while they conducted a barrage of tests on him to determine if he was having a heart attack.  The tests all came back negative.  On the morning of the 26th the chest pains were less and the doctor diagnosed him with acid reflux and sent him home with the appropriate medicine for that ailment.”“Bill joined us for breakfast at the People Palace Hotel where we were all staying after his release but did not eat.  He told us of his ordeal and said he had not slept since Sunday the 23rd so he was going back to his room to get some sleep.”“That evening, when I checked in on him, he was in bed sweating and saying that he was not feeling well again.  He did not want to go back to hospital.”

Later when I called on him he came to the door but before he could open it I could hear him collapse on the other side. We had to kick the door in. We tried to revive him in vain. At the hospital he was pronounced dead fifteen minutes after arrival.

Bill retired from his work six months ago where he did not miss one day due to illness in 25 years.  Since he was a practicing Buddhist we had him cremated in Chiang Mai assuming that he died of a heart attack.

However we have still not received the full autopsy report stating official findings and cause of death and it has been 7 weeks.

Staff at Chiang Mai Ram hospital stand by their lab test results and EKG and conclude that Bill was not having a heart attack so we want to know what it was. And the hospital said he died of ‘suspected natural causes pending toxicology reports’.

The relatives of Mr. Mah are now joining a chorus of relatives who believe the authorities are playing down the presence of a virus in the city.

American Tony Pandola is demanding the lab results on the death of his 33-yr-old wife Soraya Pandola in January. He claims she had the same symptoms as Sarah Carter, from Auckland, 23, who died in hospital after being taken ill with two friends in the Downtown Hotel.

But Soraya like Mr. Mah was not staying at the Downtown Inn.
Briton Stephen Everitt, from Boston, Lincolnshire, in England is demanding to know how his parents George, 78 and Eileen, 74, died simultaneously of a heart attack at the Downtown Hotel Room 423 on February 18th.

Above Eileen and George Everitt

“How could both my parents have died at the same time?”

And Richard Carter the father of Sarah claims simply that there is a cover-up going on and has demanded that the Downtown Inn be closed until the truth is found out about the deaths.

Little is known of the Thai victim tourist guide Waraporn Pungmahisiranon, 47, whose body was taken from room 518 of the hotel on March 3rd the same day as Sarah Carter was taken ill in Room 516 next door, nor of the French victim, also a woman.

Thailand’s Department for Disease Control says it can find no links between the deaths of the six cases it had examined of people visiting Chiang Mai in January and February and no link to the Downtown Inn owned by a millionaire former Mayor of the city.  But they had found evidence of the Coxsackie virus in Sarah and ‘Echovirus’ in another.  Four of the deaths were due to myocarditis.

People can contract the Coxsackie and Echo virus from food, water, in the air, and even objects such as bed linen or taps (faucets).