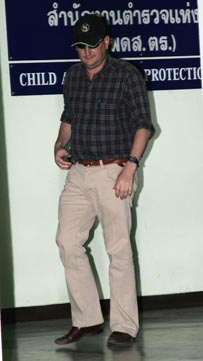 Foreign child sex abusers in Pattaya, some of whom were repeatedly released by the police or courts, were targeted in ‘Operation Rescue’ which centred on a website called ‘Boy lover’.

The website had 70,000 members dozens of whom were in Thailand or frequent visitors to the country. More arrests are expected in the operation in which 670 paedophile suspects have been targeted worldwide.

Those arrested include scout leaders, football coaches and in Britain even a police officer was among the 100 arrested.
‘Boy lover’ was a shop window for those who wanted to discuss and share their depraved interest in sex with young boys, reports today’s Daily Mail in London.

At a Europol Press Conference yesterday in The Hague, Holland, where the website was based, police said they had arrested 184 people and taken 230 children out of danger.

One of the men highlighted was Robert Alexander Horsman (right and below left)  who was jailed for 14 years in Thailand last year for sexually assaulting a 14-year-old boy. He was arrested alongside Swiss Fritz Dieter Blattner, American Roy Lund, and Briton Malcolm Payne.

Of the total, 240 suspects aged between 17 and 82 were in Britain where 121 arrests were made and 60 children rescued from abusers

The Operation Rescue was led by investigators at the Child Exploitation and Online Protection Centre (Ceop).

Horsman, 45, from Ipswich, had in fact been arrested three times in Pattaya, but on two occasions he had been released by the police or the courts.

He was first arrested in March 2006. Then in a high profile investigation called ‘Operation Naga’ led by Pimlico based CEOP, he was arrested again in Pattaya in December 2006.

Those arrested in ‘Operation Naga’ include another Briton, Malcolm Payne, 59, who formerly ran a gay bondage shop in London.

Announcing the success of ‘Operation Naga’ CEOP chief Jim Gamble said at the time: ‘We share a clear, joint commitment to prevent harm to children.  The Royal Thai Police have demonstrated an unerring commitment to making Thailand a hostile environment for UK offenders and CEOP will continue to proactively support that commitment.’

But in fact ‘Boy Lover’ member Horsman was released after the CEOP officers left and was finally arrested in July 2009 on new sex charges involving a 14-yr-old boy.

Horsman was originally from Saxmundham, Suffolk, but he went to school in Ireland where his family owned land near Ballingary, Meath. In Thailand he had a work permit to run a property company with a supposed head office in Tipperary.

In fact the statistics released by Europol yesterday include a number of people who have been jail for some time.

What was new was the linking of a number of previous arrests to ‘Boy lover’. The website site run by a 37-year-old
Dutchman who was jailed this week was infiltrated in 2007 by undercover officers in Britain and Australia. The site could not be mentioned previously but had to be revealed as the Dutchman had now appeared in  court.

And what the press conference did reveal was that many child sex abusers in Pattaya are not just individuals operating alone. Quite a few of them have been linked to a worldwide network in which they share their victims.

Of the Operation Naga arrests this what was said by Lt. Colonel Panya Cha-emtes, of the Children & Women’s Division of the Thai Police and  the lead Thai investigator at the time: ‘It’s an organisation deeply involved in the sex trade with a British man as the mastermind.’

He added:’He contacts customers through a website and has a Thai transvestite procure children for customers, most of whom are Europeans who have businesses in Thailand or retirees who have settled here.’

The British mastermind, had, said the Colonel, evaded arrest.