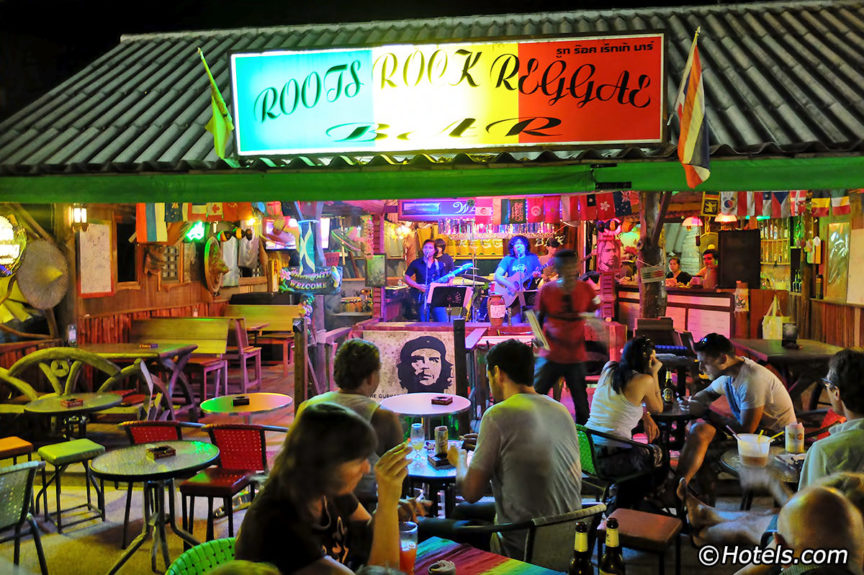 GUNMAN SHOUTED ‘GET OUT OF TOWN’ – CLAIM

A Norwegian mother fighting to prosecute the rapist of her daughter in Thailand has fled the country for the second time after she claims her husband was threatened with a gun and ordered to take her home. 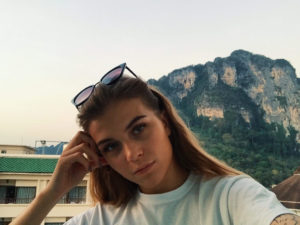 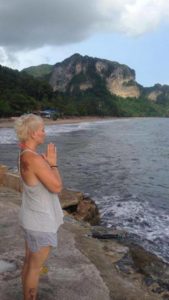 Anca Haakestad fled last Sunday with her husband, Ken, just days before a case being taken on November 13-14th against barman Thirapat Samarkit for the alleged rape in the Roots Rock Reggae Bar Ao Nang, Krabi,  at around 1.am on February 12th.

Anca first fled with her daughter after the incident in February feeling threatened after reporting the rape.

“Can there ever be any justice in Thailand for rape victims?” she asked.

The rape incident happened allegedly after 19-year-old Martine asked where the toilet was in The Roots Rock Reggae bar in Ao Nang. Thirapat took her down some stairs and opened a door to a room where she found there was a bed 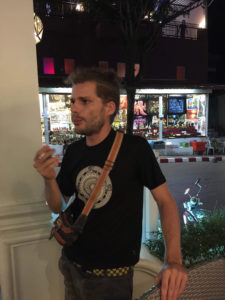 Mathias/Matheus ‘posing as a cop?’

but no toilet. He then allegedly forced her in pulled down her loose-fitting pants and raped her.

Both Anca and her daughter Martine, from Tonsberg, 63 miles south of Oslo,  fled when they discovered that after making their complaint that the alleged rapist had not been ‘banged up like a monkey’ as the police claimed, but instead was freely wandering around town while they were being told to get out of town.

They had been visited with flowers, they said, by the owner of the Roots Reggae Bar, whom they declined to talk to.

When that meeting failed, they were visited by a German man wearing pseudo police clothing and arriving in a white Mitsubishi with an advert for the bar on it. 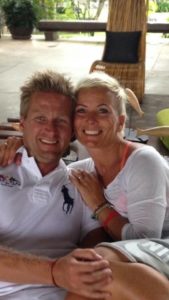 Using information Martine had given in her statement to police he said he wanted to check the timing of the rape, said Anca, as, he said, it appeared to be wrong. He further suggested that staff would testify that she was kissing Thirapat and that they heard ‘sounds of good sex’ in the room in the bar where the alleged rape took place.

Just who this man was representing is not quite clear but Thai police often use Thai speaking ‘foreign volunteers’ like this to express their views clearer or when negotiating ‘fines’.

There were two witnesses to her fleeing the scene and collapsing outside by the side of the road. One was a Briton and the second was Tommy Burke, a fireman from Yonkers, New York.

Burke went back to the bar to remonstrate but a scuffle followed in which he literally lost his shirt and so he made a tactical retreat.

On returning to his hotel he related the incident to staff at his hotel, who already knew about it.

“One of the staff said: ‘My father is police, you need to go. Get in a cab and book a flight on the way to the airport. Don’t call the girl, just go!’ I called the U.S. Embassy in Bangkok and he said pretty much the same thing. ‘Get out of Thailand’.”

Martine, her mother Anca, and Tommy Burke all fled together. 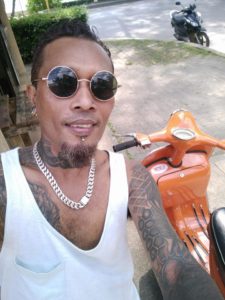 In the second incident last week Anca Haakestad had arrived in Ao Nang with her husband Ken in a positive mood. She was determined to get justice for her daughter and had hired a lawyer in Surat Thani who had gotten the DNA results from the hospital and statements from the police station and said she would win 100 per cent.

“Being a parent to see a child suffer so enormously you are searching for opportunities to improve her situation. I want to see the energetic and happy eyes I saw around midnight on 12th of February this year, before in panic and wounded  she looked hysterically  at me, her body that writhing in shock on the asphalt.

“My heart  now bubbled with happiness and I thought the time was coming for Martine that I could tell her that her mom finally managed to get her some kind of justice,” she said. 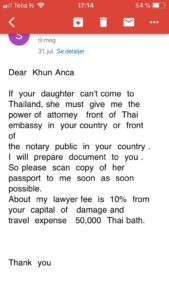 Royal Thai Embassy in Stockholm, and the case could continue without Martine, who was still being treated for trauma after the incident.

This they did and flew back arriving in Krabi on November 8th checking in to the Holiday Inn in Ao Nang. But on the second day her husband went out to buy some snacks at the local S Mart when three men drove up in a white pick up truck. 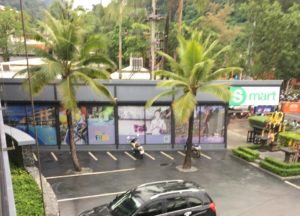 The S Mart at the Ao Nang Holiday Inn

“There were three men in the car and the driver’s window was open. The driver had a revolver which he pointed at my husband. He said: ‘Get your wife out of Thailand today or we’ll kill her and you.”

Anca said they both checked out straight away and got the next available flight to Bangkok at 6 am.

Because they could not get a flight back to Norway until 00.40 the following morning they checked into a hotel in Bangkok and locked themselves into a room and contacted their Thai friends in Bangkok and their lawyer.

“The lawyer told us to fly back to Surat Thani. He would meet us with a police escort and we would be put up in a police security home until the trial had finished.

“I tried to persuade my husband to let me do this. However, no matter how much I begged and promised to be careful, Ken said ‘No’.

“He said he had an extremely strong feeling that something was really wrong with the whole network.” 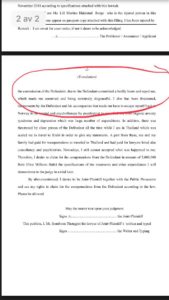 On returning to Norway she said she contacted the lawyer and he told her the case could be switched to Bangkok. However, the case could not goLegal documents signed by both mother and daughter confirm that a claim was being made for Bt5 million compensation. But the case papers clearly state that the case was a criminal case brought jointly by Martine and Krabi Province with a compensation claim included.

Although Martine was stated on the court paper as the second plaintiff, this was a bombshell to the Martine’s mother who thought she could testify on behalf of her daughter.

“The lawyer knew from the very beginning that Martine would never return to Thailand.

“The whole point had been to get this man put in prison so save other people from him. But he had given us the re-assurance that provided we had notarised her statement properly and I came to represent her the case could go ahead.”

The lawyer Somboon Thongpat later claimed Martine did not need to be present for the civil case but was needed for the criminal case.

“My 19-year-old daughter’s life was turned from heaven to hell in a very short time. How can I let those people who inflicted on her pain go free as if nothing happened? Only in Thailand can this happen,”  Anca said.

She had followed the recent case of a young women from London who said she had been raped in Koh Tao, also allegedly by a member of staff of a bar.

“All we can do is encourage people not to visit Thailand. It is clear they are not going to improve their security or protection for women.”

Normally the only instances of a criminal rape case going ahead without the victim is because the victim is dead as a result, as happened in the cases of Briton Hannah Witheridge in Koh Tao in 2014 and Katherine Horton on Koh Samui in 2006.

In those case two young Burmese and three Thai fishermen were convicted and initially sentenced to death.

But Thai Police have always reacted strongly to what they claim are ‘unsubstantiated’ claims of rape by tourists.

They strongly dismissed the recent claims by the British woman saying there had been no substance to the allegations rendering the victim and her mother liars, and in the case of a 19-year-old Dutch model who was also raped after visiting a bar in Ao Nang, again by a bar man who had offered a lift back to her hotel, Thai police showed CCTV of her holding the hand of the man as he led her to his motorcycle suggesting she was asking for it.

The police story was discredited by the extent of her injuries. The bar man had been convicted of murder as a juvenile. The 19-year-old’s father, a musician made the video ‘Evil Man of Krabi’.

In the case of the British women not only did Thai police deny the case but, even though it was not my story I received the following message from Thierry Perenon who describes himself as a  Thai policeman and aid to the Chief of Immigration Police.

“Your prostitute girl and her mom say it was rape? She only report theft? She is not scared to go to the police for report theft but afraid to report rape?

“She is poor backpack tourist that drink and want sex from Thai man and she is afraid her boyfriend know she is worst (sic) than a prostitute, just a few drinks and her legs are open.”

In 2014 in a report by the British Foreign & Commonwealth office there were, per capita, more cases of British tourists reported raped in Thailand than in any other country visited by British tourists.